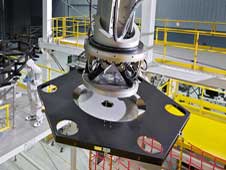 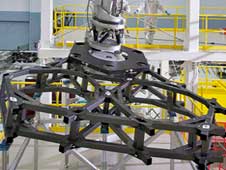 › Larger image
A surrogate mirror segment which is the same hexagonal shape and same mass or weight as one of the primary flight mirrors, is being carefully attached to the a test structure called a "backplane" that will hold 18 of those mirrors on the Webb telescope. Credit: NASA/Chris Gunn NASA engineers and scientists have been making practice runs to ensure the placement of primary mirror segments on the James Webb Space Telescope go perfectly when the flight equipment is ready. NASA issued a video and photos showing the practice run in the giant clean room at NASA's Goddard Space Flight Center in Greenbelt, Md.

The video explains and shows how a grey/silver robotic "arm" is used to install the surrogate mirrors onto a test copy of a structure called the telescope "backplane." The surrogate mirror segment is the same mass and hexagonal shape as an actual flight mirror. The test is practice for the placement of the actual flight mirror segments onto the flight telescope structure at a later date.

The video was filmed at NASA Goddard's clean room and shows the procedure of the mirror placement on the backplane. The 90 second video features John Amon, Manufacturing Engineer from ITT Exelis, Rochester, N.Y. The video is available in high resolution at NASA's Scientific Visualization Studio website.

Designing and building the actual backplane that will hold the 18 individual mirror segments that make up Webb's 21.3 foot (6.5 meter) diameter primary mirror has been a real engineering challenge. The backplane has to keep Webb's mirror segments precisely aligned to one another at extremely cold temperatures in space after being violently shaken during launch aboard a rocket. It is a truss structure consisting primarily of very lightweight but very stiff and strong square-shaped, thin-walled tubes made of a special composite material.

The actual mirror segments are made of beryllium, which is a very lightweight and stiff metal that is dimensionally stable at the Webb telescope's cryogenic operating temperature of roughly minus 390 degrees Fahrenheit. The reflecting surface of each flight mirror segment is coated with an extremely thin layer of pure gold to better reflect the infrared light that Webb is designed to capture.

The Webb telescope is the world¹s next-generation space observatory and successor to the Hubble Space Telescope. The most powerful space telescope ever built, the Webb telescope will provide images of the first galaxies ever formed, and explore planets around distant stars. It is a joint project of NASA, the European Space Agency and the Canadian Space Agency.