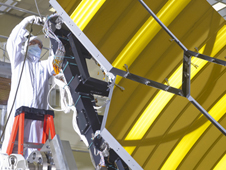 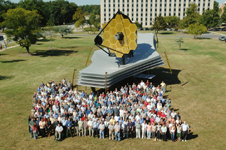 The James Webb Space Telescope full-scale model was assembled on the lawn at Goddard Space Flight Center, and displayed during September 19 - 25, 2005. The Webb Telescope team took a group photo with it which demonstrates the size of the telescope. Credit: NASA
› Larger image 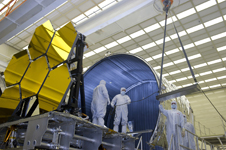 Caption: The James Webb Space Telescope mirrors have completed deep-freeze tests and are removed from the X-ray and Cryogenic test Facility at Marshall Space Flight Center. Credit: Emmett Given, NASA Marshall
› Larger image GREENBELT, Md. -- Cryogenic testing is complete for the final six primary mirror segments and a secondary mirror that will fly on NASA's James Webb Space Telescope. The milestone represents the successful culmination of a process that took years and broke new ground in manufacturing and testing large mirrors.

"The mirror completion means we can build a large, deployable telescope for space," said Scott Willoughby, vice president and Webb program manager at Northrop Grumman Aerospace Systems. "We have proven real hardware will perform to the requirements of the mission."

The Webb telescope has 21 mirrors, with 18 mirror segments working together as a large 21.3-foot (6.5-meter) primary mirror. Each individual mirror segment now has been successfully tested to operate at 40 Kelvin (-387 Fahrenheit or -233 Celsius).

"Mirrors need to be cold so their own heat does not drown out the very faint infrared images," said Lee Feinberg, NASA Optical Telescope Element manager for the Webb telescope at the agency's Goddard Space Flight Center in Greenbelt, Md. "With the completion of all mirror cryogenic testing, the toughest challenge since the beginning of the program is now completely behind us."

Completed at the X-ray and Cryogenic Facility (XRCF) at NASA's Marshall Space Flight Center in Huntsville, Ala., a ten-week test series chilled the primary mirror segments to -379 degrees Fahrenheit. During two test cycles, telescope engineers took extremely detailed measurements of how each individual mirror's shape changed as it cooled. Testing verified each mirror changed shape with temperature as expected and each one will be the correct shape upon reaching the extremely cold operating temperature after reaching deep space.

"Achieving the best performance requires conditioning and testing the mirrors in the XRCF at temperatures just as cold as will be encountered in space," said Helen Cole, project manager for Webb Telescope mirror activities at the XRCF. "This testing ensures the mirrors will focus crisply in space, which will allow us to see new wonders in our universe."

Ball Aerospace and Technologies Corp. in Boulder, Colo. successfully completed comparable testing on the secondary mirror. However, because the secondary mirror is convex (i.e., it has a domed surface that bulges outward instead of a concave one that dishes inward like a bowl), it does not converge light to a focus. Testing the mirror presented a unique challenge involving a special process and more complex optical measurements.

The Webb telescope is the world's next-generation space observatory and successor to the Hubble Space Telescope. It will be most powerful space telescope ever built, provide images of the first galaxies ever formed, and explore planets around distant stars. It is a joint project of NASA, the European Space Agency and the Canadian Space Agency.

For more information about the Webb telescope, visit:
http://jwst.nasa.gov

For video of work on the mirror segments, visit:
http://youtu.be/t_s_7lBX-K8
› Back To Top