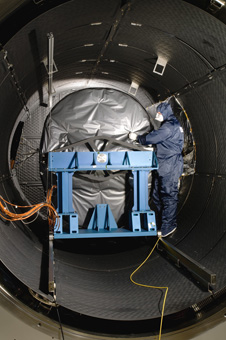 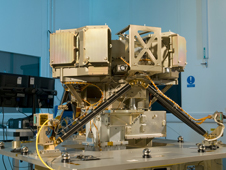 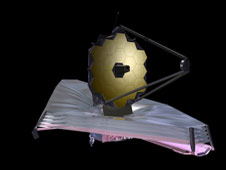 Artist's conception of the James Webb Space Telescope as of September 2009. Credit: NASA
› Larger image A pioneering camera and spectrometer that will fly aboard NASA's James Webb Space Telescope has completed cryogenic testing designed to mimic the harsh conditions it will experience in space. The Mid-Infrared Instrument (MIRI) underwent testing inside the thermal space test chamber at the Science and Technology Facilities Council's Rutherford Appleton Laboratory (RAL) Space in Oxfordshire, U.K. The sophisticated instrument is designed to examine the first light in the universe and the formation of planets around other stars.

A team of more than 50 scientists from 11 countries tested MIRI for 86 days, representing the longest and most exhaustive testing at cryogenic temperatures of an astronomy instrument in Europe prior to delivery for its integration into a spacecraft.

Along with the Webb telescope's other instruments, MIRI will help scientists better understand how the universe formed following the Big Bang and ultimately developed star systems that may be capable of supporting life. In particular, scientists hope to explore young planets around distant stars that are shrouded by gas and dust when viewed in visible light. Because infrared light penetrates these obstructions, MIRI can acquire images of planetary nurseries sharper than ever before possible. With its spectrometer, MIRI could potentially reveal the existence of water on these planets as well, informing future investigations into their habitability for humans.

To capture some of the earliest, infrared light in the cosmos, MIRI has to be cooled to 7 Kelvin (-266 Celsius/-447 Fahrenheit), which brings tough challenges for testing the instrument. Inside the RAL Space thermal space test chamber, specially constructed shrouds, cooled to 40K (-233C/-388F), surround MIRI while scientists observe simulated background stars. The tests were designed to ensure that MIRI can operate successfully in the cold vacuum of space and allow scientists to gather vital calibration and baseline data.

The MIRI team is now analyzing data from the cryogenic test campaign, completing remaining "warm testing," and will prepare the instrument for delivery to NASA Goddard. There it will be integrated with the other instruments, and the telescope.

"Thousands of astronomers will use the Webb telescope to extend the reach of human knowledge far beyond today's limits. Just as the Hubble Space Telescope rewrote textbooks everywhere, Webb will find new surprises and help to answer some of the most pressing questions in astronomy," said John Mather, Nobel laureate and Webb senior project scientist at NASA Goddard.