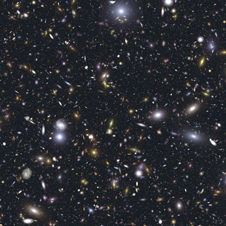 › Larger view
A simulation of a deep field that might be produced by Webb Telescope. Credit: NASA 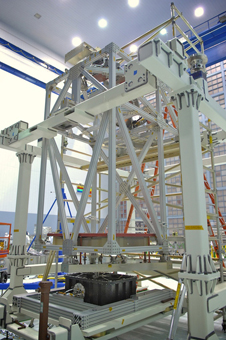 › Larger view
Pictured here is the OSIM - also called the optical bench. This will not fly in space but will serve to aid precise measurements on the ground, needed for precision integration of the instruments. Credit: NASA/Goddard Space Flight Center/Chris Gunn 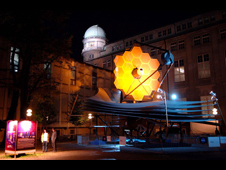 › Larger view
The full scale model of the James Webb Space Telescope in Dublin, Ireland in 2007. Credit: Eads-Astrium WASHINGTON -- NASA's James Webb Space Telescope has passed its most significant mission milestone to date, the Mission Critical Design Review, or MCDR. This signifies the integrated observatory will meet all science and engineering requirements for its mission.

"I'm delighted by this news and proud of the Webb program's great technical achievements," said Eric Smith, Webb telescope program scientist at NASA Headquarters in Washington. "The independent team conducting the review confirmed the designs, hardware and test plans for Webb will deliver the fantastic capabilities always envisioned for NASA's next major space observatory. The scientific successor to Hubble is making great progress."

All 18 Webb telescope mirror segments will be cryogenically tested in the X-ray & Cryogenic Facility, or XRCF, at NASA’s Marshall Space Flight Center in Huntsville, Ala. The XRCF is the world's largest X-ray telescope test facility and a unique, cryogenic, clean room optical test location. As this cooling takes place, engineers will measure in extreme detail how the shapes of the mirrors change, simulating how they'll react to space temperatures.

"This program landmark is the capstone of seven years of intense, focused effort on the part of NASA, Northrop Grumman and our program team members," said David DiCarlo, sector vice president and general manager of Northrop Grumman Space Systems. "We have always had high confidence that our observatory design would meet the goals of this pioneering science mission. This achievement testifies to that, as well as to our close working partnership with NASA."

The MCDR encompassed all previous design reviews including the Integrated Science Instrument Module review in March 2009; the Optical Telescope Element review completed in October 2009; and the Sunshield review completed in January 2010. The project schedule will undergo a review during the next few months. The spacecraft design, which passed a preliminary review in 2009, will continue toward final approval next year.

The review also brought together multiple modeling and analysis tools. Because the observatory is too large for validation by actual testing, complex models of how it will behave during launch and in space environments are being integrated. The models are compared with prior test and review results from the observatory's components.

Although the MCDR approved the telescope design and gave the official go-ahead for manufacturing, hardware development on the mirror segments has been in progress for several years. Eighteen primary mirror segments are in the process of cryo-polishing and testing at Ball Aerospace in Huntsville, Ala. Manufacturing on the backplane, the structure that supports the mirror segments, is well underway at Alliant Techsystems, or ATK, in Magna, Utah. This month ITT Corp. in Rochester, N.Y., demonstrated robotic mirror installation equipment designed to position segments on the backplane. The segments' position will be fine-tuned to tolerances of a fraction of the width of a human hair. The telescope's sunshield moved into its fabrication and testing phase earlier this year.

The three major elements of Webb - the Integrated Science Instrument Module, Optical Telescope Element and the spacecraft itself - will proceed through hardware production, assembly and testing prior to delivery for observatory integration and testing scheduled to begin in 2012.

The Webb is the premier next-generation space observatory for exploring deep space phenomena from distant galaxies to nearby planets and stars. The telescope will provide clues about the formation of the universe and the evolution of our own solar system, from the first light after the Big Bang to the formation of star systems capable of supporting life on planets like Earth. The telescope is a joint project of NASA, the European Space Agency and the Canadian Space Agency.

For more information about the Webb telescope, visit: