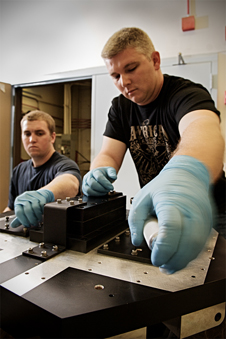 Engineering Test Units are working models of the instruments that are used for testing and validation in laboratory tests, to ensure that they work properly.

In this photo, NASA Goddard Integration Technicians Brandon Gauss and Tony Keim are preparing the Webb telescope's Near-Infrared Spectrograph (NIRSpec) instrument mass simulator for integration onto the Webb's Integrated Science Instrument Module (ISIM) structure. The ISIM structure is the part of the telescope on which all of the mission’s science instruments will be mounted, so it is important that it maintain its rigidity otherwise it may affect the instruments that are attached to it) -- it maintain its rigidity to keep the instruments precisely in their places.

The engineers use these to test the strength of the ISIM by adding the simulated weight of instruments that will be mounted on it. These mass simulators are bolted to the ISIM before its next thermal test to verify the structure can safely handle the weight of the flight instruments during ISIM instrument alignment and performance verification testing. Any distortion of the ISIM would move the instruments out of focus.

The Webb Telescope project is managed at NASA's Goddard Space Flight Center in Greenbelt, Md. The telescope is a joint project of NASA, the European Space Agency and the Canadian Space Agency.

For more information about the NIRSpec, visit: