NASA technology does some amazing things. Imagine taking one-tenth of an ounce of gold and spreading it so thin that it completely coats something over four feet in diameter. That's what scientists and engineers did for the primary mirror segments that will fly on NASA's James Webb Space Telescope.

The Webb telescope has 18 hexagonal-shaped mirror segments that make up its primary mirror. Each of the segments is 1.32 meters (4.3 feet) in diameter, flat to flat. Webb Telescope's scientists and engineers determined that a primary mirror 6.5 meters (21 feet 4 inches) across is what was needed to measure the light from faint astronomical sources. 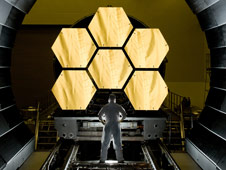 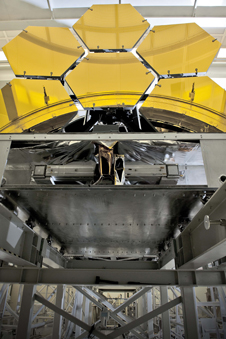 To enable the mirrors to most efficiently reflect the infrared light from say, distant galaxies, a microscopically-thin gold coating was needed. Because the Webb telescope is looking at infrared light, gold was the ideal choice because it reflects infrared light so efficiently, especially compared to the reflectivity of bare beryllium. The amazing thing is that Quantum Coating, Inc.'s mirror coating technology allowed just a tiny amount of gold to cover an entire mirror.

"The thickness of the gold coating on the mirrors is only 100 nanometers thick, or a tenth of a micron, which is 1/10,000th of a millimeter," said Paul Geithner, Deputy Project Manager - Technical for the Webb telescope at NASA's Goddard Space Flight Center in Greenbelt, Md. "A human hair is roughly 1000 times thicker."

A new video investigates the technology that layers a micro-thin gold coating on the Webb mirrors.

The video called "Golden Touch" is part of an on-going video series about the Webb telescope called "Behind the Webb." It was produced at the Space Telescope Science Institute (STScI) in Baltimore, Md. and takes viewers behind the scenes with scientists and engineers who are creating the Webb telescope's components.

Estacion interviews Ian Stevenson, Director of Coating Services at Quantum Coating, Inc. who explained how incredibly small the coating is on the mirror.

In the video, Tyrone Wilson, a Coating Chamber Technician who operated the coating chamber, explained that the mirrors were coated in special manner called "vacuum deposition." The mirrors are placed in a special chamber where air is removed, and the miniscule amount of gold is vaporized into a cloud. The cloud condenses on the surface of the mirror to form a film. That way, the mirrors obtain maximum reflection.