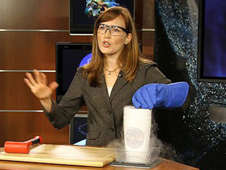 NASA Astrophysicist Amber Straughn demonstrates the cold environment where the Webb telescope will be by dipping flexible rubber surgical tubing into liquid nitrogen in the video. Credit: NASA
› Larger image 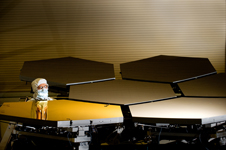 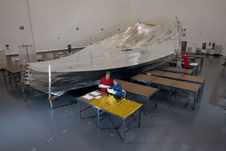 The five-layer sunshield consists of thin membranes made from a polymer-based film. It has an SPF (Sun Protection Factor) of about 1 million! Its designed to block solar light and keep the Webb telescope instruments operating at cryogenic (cold) temperatures. Credit: Northrop Grumman
› Larger image Interested in learning some quick facts about NASA's next-generation space telescope? NASA has created a short video to show you just how literally "cool" the James Webb Space Telescope really is. For one thing, Webb's infrared detectors will be cryogenically cooled to roughly –370F (-224C)!

In a 4 minute video produced at NASA's Goddard Space Flight Center in Greenbelt, Md., astrophysicist Amber Straughn takes you on a quick journey of facts and images to explain what the Webb will tell us about the cosmos.

Amber provides some amazing images of the Hubble and phenomena that it has seen while answering the question, how will Webb improve on what Hubble has seen? Amber tells viewers how Webb's use of infrared light is going to reveal a lot more than astronomers have ever seen before. She also explains how the Webb telescope can see farther back in space and time, and compares the size of the Webb and Hubble primary mirrors to the height of a person.

What's so cool about the Webb telescope? Amber demonstrates just how cold the temperatures of space are where Webb will orbit (over 1 million miles from the Earth) by dipping flexible rubber surgical tubing into liquid nitrogen. At room temperature, nitrogen is a gas; but is a liquid at very cold temperatures - below -321 Fahrenheit (F)/-196 Celsius (C) similar to what the Webb will experience and can instantly change the structure of the tubing, and Amber proves this by smashing it like glass!

Infrared light is heat radiation, so Webb's detectors also need to be kept very cold. That way, they can detect the faint infrared light given off from objects such as stars that are so far away. To keep the telescope that cold, there's a giant sunshield to reflect away the heat and light from the sun. Objects that the Webb's infrared detectors will observe would appear to our eyes as faint as a child’s night light shining from the surface of the moon!

The video shows artist's concepts of some of the mysteries of the universe Webb telescope hopes to solve, like forming and evolving galaxies, the atmospheres of other planets outside of our solar system, the first stars in the universe, and the birth of stars.

The James Webb Space Telescope is named for the second NASA administrator, James Webb, who was the leader of NASA during the Apollo Moon program. The Webb telescope is a collaborative effort between NASA, the European Space Agency and the Canadian Space Agency.