Grow Text SizeShrink Text Size
The Amazing Technology That Crafted the Webb Telescope Technology
The creation of the next generation James Webb Space Telescope was only possible as a result of imagining and developing the industrial machines that would make it a reality. In the near future, some of that industrial technology could be in an exhibit for a museum of Industry and Technology.


Imagine walking into a museum of industry and technology 10 years from today and seeing one of the incredible machines that helped perfect the James Webb Space Telescope mirrors. Those mirrors allowed us to see the earliest galaxies in the universe. You would be looking at the "Optical Test Station," which was critical in shaping the telescope's mirrors to perfection.

Your tour guide would first explain that the Webb telescope's mirrors went through a lengthy manufacturing process and rigorous tests to ensure they maintained their shape while operating in the extreme cold of space. The mirrors must be able to provide NASA with the sharpest possible images of objects in space, and to do that, they needed to be polished to a precise "prescription." However, the challenge is that the mirrors are polished at room temperature, but have to meet their shape prescription at a temperature near minus 400 degrees Fahrenheit or colder.

You would learn that the mirror manufacturing for Webb took six years and started with blanks (slabs of metal) made out of beryllium, an extremely hard metal that holds its shape in the extreme cold of space. Polishing is critical to the success of the Webb telescope mirrors, and was conducted at the L-3 Tinsley facility in Richmond, Calif. 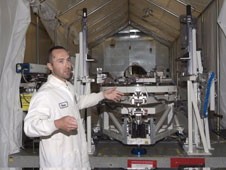 › Larger image
Patrick Johnson, the Webb telescope Optical Test Supervisor at L-3 Tinsley is standing in front of an optical test station used to measure mirror surfaces. Credit: L-3/Tinsley It is there that the "Optical Test Station" was created that enabled the mirrors to be made to the extreme accuracy. Your tour guide would stand in front of this large, shiny, steel-hued machine and explain that Tinsley also created a state-of-the-art mirror polishing facility that included temperature cycling ovens, sophisticated measurement systems and nine unique Computer Controlled Optical Surfacing systems able to polish the mirrors to a precision of 18 nanometers. That means if the continental United States was polished smooth to the same tolerances, the entire country – from Maine to California – would not vary in thickness by just over two inches!

This precision was important to help the Webb telescope see the first galaxies that ever formed, and planets around distant stars. The Webb telescope is the world’s next-generation space observatory and successor to the Hubble Space Telescope. It is a joint project of NASA, the European Space Agency and the Canadian Space Agency.

This future exhibit may include a video interview with Patrick Johnson, who was the Webb telescope Optical Test Supervisor at the L-3 Tinsley facility in Richmond, Calif. Patrick used the Optical Test Station to help make the mirrors so precise. As the video plays, Patrick provides answers to questions on what exactly the Optical Test Station does, and how it was used to measure the Webb's mirror surfaces. He would start explain that in 2011, the last set of Webb telescope flight mirrors were finished being polished and coated.

Patrick would explain interferometry, the techniques in which electromagnetic waves are superimposed such that we learn about the light. An interferometer allows precise measurements of surfaces to a fraction of the wavelength of visible light.

Let's listen as Patrick answers some quick questions about the Optical Test Station. The narrator asks "What does the Optical Test Station measure?" Patrick responds, "The optical test was designed to test many of the prescription alignment parameters (or optical surface specifications)." One of the ways that was done was by setting the distance from the interferometer focus point to the surface of the mirror. That was measured using an ADM, known as an Absolute Distance Meter. An ADM is basically a high-technology tape measure that uses laser light to measure distances. Once the spacing was measured, then the radius of the mirror was measured as well as the mirror's circular surface. It's all about being precise. 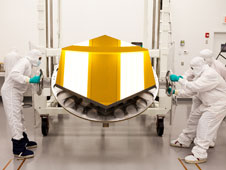 › Larger image
The James Webb Space Telescope's Engineering Design Unit (EDU) primary mirror segment, coated with gold by Quantum Coating Incorporated. Credit: Drew Noel The next thing involved in the measurement is like something out of Star Trek -- it's a Computer Generated Hologram (CGH)- based test. A CGH subtracts light reflected from the Webb telescope mirror to produce light waves which can be analyzed by an interferometer to measure the mirror’s surface. When tested and analyzed, the data from that test shows any errors that remain on the mirror's surface that need to be corrected to make it perfect. The Computer Generated Hologram isn't just a projected image. it has "alignment features" built into it, which means that there are three prescriptions or settings that mirrors are made into.

Patrick also mentions that the smoothness of the mirror is measured to determine how much stray light, or light from places other than where the mirror is directed, may be created by the mirror's surface.

"If you're wondering what the shiny buzz-saw like object is behind me, it’s a fold mirror," Patrick says. "Due to space constraints, the Webb telescope’s 16 meter (52.49 foot) radius test setup had to be folded in half using a very large, very flat mirror, so that it can fit inside the test facility."

The narrator then asks Patrick how the mirrors are put into that giant buzz-saw like machine. "The mirrors are loaded with the optical face up onto the machine. Then they need to be docked, or locked in place. We do that using mounting features on the back of the mirrors and docking features on the Primary Segment Mount (PSM) on the Optical Test Station. Once the mirror is locked in, the PSM can be raised into a vertical position and point the mirror's reflective surface down the optical path length, or basically pointing away from the camera, to test it."

The narrator then asks, "Does the Optical Test Station use lasers to test, or infrared light?" Patrick responds, "It uses a visible laser beam. The interferometer, which is the little white box to the left of my head (in the image or video) uses a red 632.8 nanometer wavelength laser beam to measure optical surfaces." The narrator notices a sign near Patrick and says, "I noticed the sign behind you says "Primary Segment Mount." Does that mean that all of the Webb telescope's 18 primary mirrors were tested here?" "Correct," Patrick replies. "All 18, plus the numerous spares."

One last and important question is asked."What happens if the mirrors don't pass this test?" the narrator asks in the video. Patrick replies, "The mirrors would go back to optical surfacing then get measured again, and back and forth until they pass all requirements."

The tour then moves on to show visitors a spare mirror that didn't make it on the Webb telescope, and then reveals many secrets the universe has been hiding from humankind for a very long time.