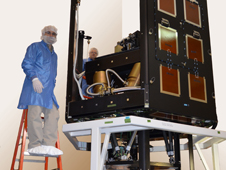 The Center Of Curvature Optical Assembly (COCOA) will allow the program to verify the optical performance of the 21.3-foot (6.5-meter) primary mirror at its 40 degrees Kelvin (-233 Celsius) operating temperature. The COCOA contains mechanical and optical instruments that allow the test team to identify, align and test the 18-segments from outside the vacuum chamber. Note: The background of this image has been digitally removed. Credit: ITT Exelis
› Larger image 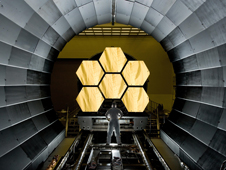 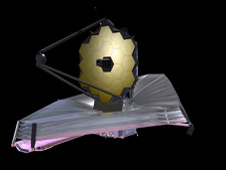 COCOA stands for "Center of Curvature Optical Assembly." Curvature is important in a mirror, just as the convex side mirrors on your car are shaped to give you a wide field of vision behind and beside your car. COCOA tests on the Webb telescope's concave mirror segments are critical because they will tell engineers if all of the mirrors work together to make a telescope that has the correct shape.

"We need to check that the mirrors are of the right prescription, just like eyeglasses, so the images from our telescope are not blurry," said Lee Feinberg, Webb telescope Optical Telescope Manager at NASA's Goddard Space Flight Center, Greenbelt, Md.

The Webb telescope has 21 mirrors, with 18 of these being six-sided segments working together as one large 21.3-foot (6.5-meter) mirror. Every individual mirror has been previously tested to confirm it has the correct shape, but testing them all together as an assembled telescope with COCOA ensures that the telescope as a whole works correctly.

The COCOA is part of NASA's vacuum cryo equipment that will be used at NASA's Johnson Space Center in Houston to test the performance of the mirrors at operating temperatures. That's important because COCOA tells engineers if the full 18 segment mirror is functioning correctly in "operating temperatures" of 40 degrees Kelvin (-233 Celsius, or -387.4 Fahrenheit) prior to final assembly of the observatory before launch.

The Webb telescope is the world’s next-generation space observatory and successor to the Hubble Space Telescope. The most powerful space telescope ever built, the Webb telescope will provide images of the first galaxies ever formed, and explore planets around distant stars. It is a joint project of NASA, the European Space Agency and the Canadian Space Agency.

For more information about the Webb Telescope mirrors, visit: