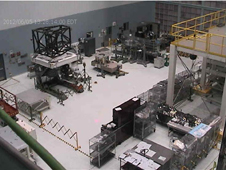 This is an image taken from one of NASA’s two special "Webb-cams,” a camera in a giant clean room at NASA Goddard. The Webb-cams focus on what's happening with the very first completed instrument that will fly onboard the James Webb Space Telescope. The flight Integrated Science Instrument Module (ISIM) is at left center. The Ambient Optical Assembly Stand is on the right side of the image. Credit: NASA
› Larger image 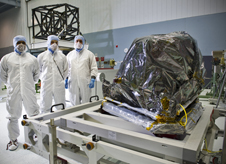 Three engineers from the European Space Agency wearing blue hood are investigating the Mid-Infrared Instrument (MIRI) that recently arrived at NASA Goddard’s clean room. The MIRI sees light in the mid-infrared region of the electromagnetic spectrum. Keep watching the Webb-cams, and the MIRI will likely be moved into view soon. Credit: NASA/Chris Gunn
› Larger image NASA's special "Webb-cam," the camera in a giant clean room at NASA Goddard, now has "double vision," because there are two video cameras now focusing on what's happening with the very first completed instrument that will fly onboard the James Webb Space Telescope. Recently, there's been a lot to look at because the MIRI instrument arrived at Goddard from the United Kingdom.

These aren't just typical webcams, they're "Webb-cams" because they're focused on the progress of work being done on components of the upcoming James Webb Space Telescope in the largest clean room at NASA's Goddard Space Flight Center, Greenbelt, Md.

"We now have two webcams in the Building 29 clean room at Goddard, one showing the left side and one showing the right," said Maggie Masetti, Web Developer on the Webb telescope mission at NASA Goddard. "The screenshots on-line are updated every minute. The clean room is generally occupied from 8:00 a.m. to 4:30 p.m. Eastern Time in the U.S., Monday through Friday. There may not be much activity outside of these hours." The Webb-cam can be seen on-line at: http://jwst.nasa.gov/webcam.html.

The James Webb Space Telescope contains four science instruments, but only one of them, the MIRI, sees light in the mid-infrared region of the electromagnetic spectrum. Mid-infrared light is longer in wavelength than that which the other Webb instruments are designed to observe. This unique capability of the MIRI allows the Webb telescope to study physical processes occurring in the cosmos that the other Webb instruments cannot see. The MIRI will be integrated into the Integrated Science Instrument Module (ISIM) Structure and viewers of the "Double Vision Webb Cams" can see it happen.

The MIRI is important to the Webb telescope because its sensitive detectors will allow it to make unique observations of many things including the light of distant galaxies, newly forming stars within our own Milky Way, the formation of planets around stars other than our own, as well as planets, comets, and the outermost debris disk in our own solar system.

The MIRI arrived at Goddard in late May, 2012. It was assembled at and shipped from the Science and Technology Facilities Council's (STFC) Rutherford Appleton Laboratory (RAL) in the U.K. The MIRI's components were built by a consortium of 11 European countries and the JPL. The instrument was assembled and tested at the Rutherford Appleton Laboratory near Oxford, England.

What is a Clean Room?

Clean rooms are cleaner than hospital operating rooms. They are pristine areas kept as free as possible of contaminants that could interfere with delicate technology. NASA Goddard has several clean rooms, but the Webb telescope components are in Goddard's largest.

People who work in a clean room must wear sterile bodysuits, head covers, gloves, boots, and face masks. It takes about 10 to 15 minutes to get dressed before entering, and it's important because even one speck of dust or a fingerprint could severely damage the sensitive telescope components and instruments. Clean rooms act to filter out these harmful contaminants through a unique ventilation system and an entire wall of air filters.

The clean room ventilation system circulates almost one million cubic feet of air every minute through 9,000 square feet of HEPA filters located along one wall. The HEPA filters are specially designed to last several decades. All of these features provide the largest Goddard clean room with a Class-10,000 rating. That means any cubic foot of air in the clean room has no more than 10,000 particles floating around in it larger than 0.5 microns. A micron is one-millionth of a meter, and typical “outside” air has millions of such particles. A human hair is between 20 and 200 microns wide.

Now that the "Webb-cam" has "double vision," people can see what scientists and engineers are doing with the MIRI instrument and other components of the Webb telescope without leaving their computer. Watching the Webb come together over the "Webb-cam" is watching history in the making.

To watch through the double vision of the Webb-cam, visit:
jwst.nasa.gov/webcam.html

To see the "Behind the Webb" video about the MIRI, visit:
http://webbtelescope.org/webb_telescope/behind_the_webb/14 Rob Gutro
NASA's Goddard Space Flight Center, Greenbelt, Md.
› Back To Top