Grow Text SizeShrink Text Size
How to Build a Life-Sized Model and Real Giant NASA Space Telescope
It takes many years to build a space telescope or a satellite and years to put one together. However, when it comes assembling and disassembling the life-sized model of NASA's James Webb Space Telescope, it takes a couple of days. That's how long it took to assemble the Webb model in New York City recently.

The full-scale model of the James Webb Space Telescope was built by the prime contractor, Northrop Grumman, to provide a better understanding of the size, scale and complexity of this satellite. It was set up in New York City's Battery Park for the 2010 World Science Festival, which ran June 1- June 6.


The life-sized model is constructed mainly of aluminum and steel, weighs 12,000 lbs., and is approximately 80 feet long, 40 feet wide and 40 feet tall. It was specifically designed for an environment subject to gravity and weather. A specially manufactured material imported from France called "Ferrari recontraint" allows the sunshield to 'breathe.' The model requires 2 trucks to ship it over land, and assembly takes a crew of 12 approximately four days.

How Real Satellites/Space Telescopes Come About 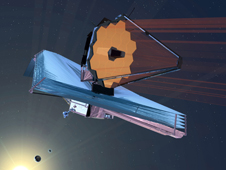 A December 2007 artist's conception of the James Webb Space Telescope. Credit: NASA
› Larger image It takes years to bring a real large space telescope from basic concept to hardware reality. First, a scientist comes up with an idea to study some aspect of the Earth or the cosmos. The idea is discussed, reviewed and developed by committees of scientists. It is proposed to NASA, who makes decisions on what missions to go forth on, and which missions to pass on. If a mission is selected for study a timeline is created to develop the mission.

One of the most difficult aspects of creating a new mission is convincing others to fund it. Once a mission is funded, the team of scientists and engineers "pitching" the mission can then investigate how it could come together. Later, NASA usually selects a prime contractor to help design the telescope and other systems that will fly on the satellite. Northrop Grumman was selected to build components for the Webb telescope. The instruments, or cameras, on the telescope are selected as well, with teams of scientists to watch over the design.

The design process usually includes a number of different designs, which are all tested to see which would yield the best result for the type of object the instrument would study. For example, various types of infrared cameras may be developed and tested, and the one that gives a scientist the best result, would be chosen to be built as a test unit. 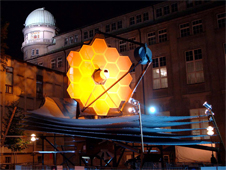 The life-sized James Webb Space Telescope model sits in front of the Royal Hospital Kilmainham, in Dublin, Ireland. Credit: Richard Bent, Northrop Grumman Space Technology
› Larger image Engineering test units, or ETUs are created before an actual instrument is built, so that engineers and scientists can make sure it would work properly. ETUs are a replica of the flight unit that can perform certain flight functions for testing purposes. ETUs are also used when engineers are practicing installation of an instrument into a satellite's mainframe or "bus." The outcome of the tests on ETUs may lead to a change in handling procedures of the actual flight instrument, but not a change in its flight construction.

Once the ETUs test successful, then the actual instruments that will fly aboard a satellite or space telescope can be manufactured. Those instruments go through their own set of rigorous tests by the manufacturing contractor, NASA and other partners. On the Webb telescope, NASA is partnering with the European Space Agency and the Canadian Space Agency.

Satellite and space telescope instruments can endure harsh temperature swings as big as 200 degrees Fahrenheit, micro-meteor impacts and exposure to solar radiation. On top of that, before a spacecraft like the Webb can operate in orbit, it has to survive a ride on a rocket to get there. That's where environmental testing chambers like the ones at NASA's Goddard Space Flight Center in Greenbelt, Md., come into play. Hardware gets run through NASA Goddard's centrifuge, acoustics and thermal vacuum chambers to ensure they can endure the rigors of launch.

The centrifuge simulates the increased feeling of gravity's pull during a launch. For astronauts, that's normally a few minutes at two or three times the force of Earth's gravity, measured in Gs. The Webb telescope can experience 6-7 G's due to the Ariane 5 rocket's combined acceleration and vibration. The Webb telescope will be launched on an Ariane 5 ECA rocket. The launch vehicle is part of the European contribution to the mission.

Launching a rocket carrying a satellite or space telescope creates extraordinarily loud noise, so engineers use an Acoustic Test Chamber to make sure an instrument can handle it safely. In Goddard's 42-foot-tall chamber, technicians expose payloads to the noise of a launch. To do that, they rely on 6-foot-tall speakers. The speakers (more accurately called horns) use an altering flow of gaseous nitrogen to produce a sound level as high as 143 decibels for one-minute tests. That's about the level of sound heard standing next to a jet engine during takeoff.

This panorama shows the inside of Goddard's High Bay Clean Room, as seen from the observation deck. The clean room will be a home to some Webb components before the telescope is put together. Credit: NASA/Chris Gunn
› Larger image

The hardware is also tested in the thermal vacuum which exposes them to conditions they will experience in space. The chamber has massive mechanical vacuum pumps and cryopumps to ensure that the hard vacuum of space is simulated in the test chamber. The cryopumps use gaseous helium to condense remaining gases out of the chamber once the mechanical pumps have done their work. The two types of pumps work together to eliminate all but the tiniest trace of air in the chamber, down to about a billionth of Earth's normal atmospheric pressure.

Because the Webb telescope is operating in the infrared portion of the electromagnetic spectrum it is designed to operate at very cold temperatures. To simulate this environment an additional cooling system, a helium refrigeration system, was added so the thermal vacuum chamber could reach temperatures in the -413 Fahrenheit (F) range. "The ISIM structure was tested in our thermal vacuum chamber down to about 26 Kelvin, or minus 413 F," said Jon F. Lawrence, Webb telescope Mechanical Systems Lead Engineer/Launch Vehicle Liaison at NASA Goddard.

This test program starts at the lowest level of assembly, instrument or spacecraft components and is repeated at each next level of assembly. Once the instruments pass these tests they are all put together into the structure which holds them and the unit is tested again. The instrument structure is connected to the telescope and the whole observatory is tested yet again. There isn't a vacuum chamber large enough to hold the entire Webb observatory at NASA Goddard, so the telescope will travel to NASA's Johnson Space Center in Houston, Texas, to be tested in a chamber that was originally built for testing the Apollo command module to simulate the trip to the moon. The next stop after that is launch into deep space.

Currently, ETUs or actual flight hardware for the Webb telescope are being tested in various ways.

The Webb Telescope project is managed at NASA's Goddard Space Flight Center in Greenbelt, Md. The telescope is a joint project of NASA, the European Space Agency and the Canadian Space Agency.