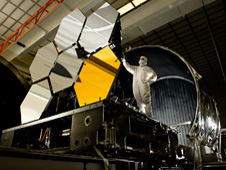 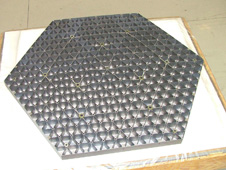 › View larger image
One of the primary mirror segment blanks. This image shows the back of the mirror blank, which is carved out in this pattern to make the mirror segment light, yet maintain its integrity. It is near the beginning of the mirror process. Credit: AXSYS There are heavy metal videos, and now there's a "Not so heavy metal video." This one isn't about music however, it's about beryllium, the primary ingredient in making state-of-the-art mirrors for the next generation space telescope: The James Webb Space Telescope.

A new video takes viewers to the western Utah desert to investigate the mining of beryllium, the primary ingredient used to create the Webb telescope's mirrors. Mining the beryllium is a unique process, and after the mining is complete the material takes a lengthy journey around the U.S. to come into the final product: a Webb telescope mirror.

The video called "Not So Heavy Metal" is part of an on-going video series about the Webb telescope called "Behind the Webb." It was produced at the Space Telescope Science Institute (STScI) in Baltimore, Md. and takes viewers behind the scenes with scientists and engineers who are creating the Webb telescope's components.

The Webb telescope's primary, secondary and tertiary mirrors are made of beryllium. Beryllium is a relatively rare metal which is only mined and processed in one place in the western hemisphere. The beryllium used in the Webb mirrors is called "O-30" and is a fine powder of high purity. During the five minute and zero second video, STScI host Mary Estacion interviewed people involved in mining the beryllium at Brush Wellman Inc.’s mine in the Topaz-Spor Mountains of Utah.

Beryllium is a steel-gray metal (atomic symbol: Be) known for its high strength to weight ratio and is good at holding its shape across a range of cryogenic temperatures, which is just what it would encounter in space on the Webb telescope. Beryllium is also a good conductor of electricity and heat and is not magnetic. It also has one of the highest melting points of metals. The addition of beryllium to some alloys often results in products that have high heat resistance, improved corrosion resistance, greater hardness, greater insulating properties, and better casting qualities.

Many parts of supersonic aircraft are made of beryllium alloys because of their lightness, stiffness, and dimensional stability. Other applications make use of the nonmagnetic and non-sparking qualities of beryllium and the ability of the metal to conduct electricity.

The James Webb Space Telescope will endure a temperature of -240 degrees Celsius (33 Kelvin or -400 Fahrenheit). Beryllium contracts and deforms less than glass -- and remains more uniform -- at such temperatures. In total, there are 18 mirror segments that will form the Webb telescope's huge primary mirror. The properties of beryllium will enable the Webb telescope to see deeper into the universe and further back in time than any other space telescope operating today.

Here on Earth, most of the beryllium exists in minerals such as beryl and bertrandite. Most industrial production of beryllium is accomplished by a chemical reaction between beryllium fluoride and magnesium metal. It is actually highly toxic to plants, animals and humans if ingested. So, during the manufacturing, handling and machining, special care has to be taken t to avoid breathing in or swallowing beryllium dust.

The "Not So Heavy Metal" video provides viewers with a look at where the beryllium comes from and the complex and interesting process of mining it. However, the mining is just the beginning of the mirror manufacturing process.

The journey from raw beryllium material to final polished mirrors involves 14 stops at highly specialized facilities in eight states and 11 different places around the U.S. The mirrors travel more than 15,000 miles, making stops in eight states along the way, visiting some states more than once, before journeying to South America for lift-off and the beginning of their final journey to space. 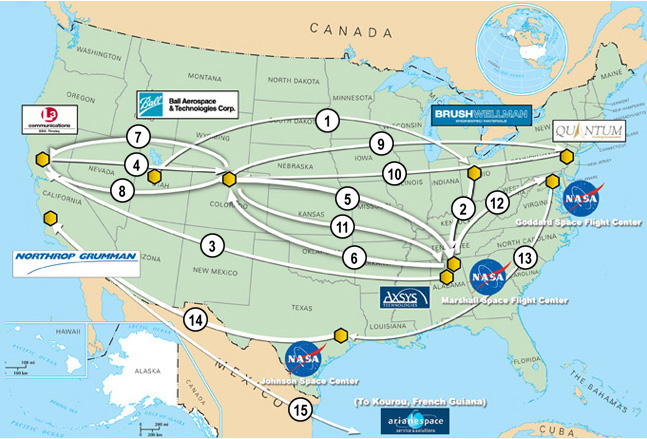 The James Webb Space Telescope's 18 special lightweight beryllium mirrors have to make 14 stops to 11 different places around the U.S. to complete their manufacturing. The 18 mirror segments will form the Webb telescope's huge primary mirror. There are 18 segments, because it takes a large mirror to look back farther in time than ever before. They come to life at beryllium mines in Utah, and then move across the country for processing and polishing. In fact, the mirrors make stops in eight states along the way, visiting some states more than once, before journeying to South America for lift-off and the beginning of their final journey to space. This graphic shows the different places they have to travel, and what is accomplished at each location.

After beryllium is mined in Utah it then moves across the country for purification, processing and polishing. It is first shipped to Brush Wellman’s facility in Elmore, Ohio, where it is sifted and purified into and pressed into a flat shape. That shape is used to make two extremely uniform optical mirror blanks. Each mirror blank will be used to make one mirror segment; the full Webb mirror will be made from 18 hexagonal (six-sided) segments.

Next, the mirror goes to Axsys Technologies in Cullman, Ala., where the back of each "blank" is made into a honeycomb structure to lighten it, and they also provide general shaping of the front of the mirror. Each blank starts at 250 kilograms (kgs) (~551 pounds) and when all machining is done the weight has been reduced to ~21 kgs. (~46 pounds).

From Axysys to L3 Communications, Tinsley Laboratories in Richmond, Calif. each segment(s) is ground and polished to a smooth and exact shape then tested at room temperature. The next stop is Ball Aerospace & Technologies Corp. in Boulder, Colo., where interface mounts and actuators are attached to the mirror segment(s), and vibration and optical testing are done. Then segments are shipped to the X-ray and Cryogenic Facility (XRCF) in Huntsville, Ala., where Ball conducts cold (cryogenic) vacuum optical testing in order to generate a mirror surface cryo-distortion map. Once complete, it goes back to Ball Aerospace & Technologies Corp. to remove the mounts and actuators.

L3 Communications then receives the mirror(s) again for final polishing by polishing in the opposite of the surface error values derived from the XRCF's cryogenic testing. Now, as the mirror segments distort as they go cold in space they should distort into the necessary optical prescription so as to create 6.5 meter (~21.3 feet) primary mirror segment. Ball Aerospace & Technologies then cleans mirror segments to prepare for coating. Afterward, it journeys to Quantum Coating, Inc., Moorestown, N.J., where optical surface coating is applied.

Ball Aerospace & Technologies Corp. then takes the mirror segment(s) back to reassemble with mounts and actuators. Final vibration testing is done there also. The mirror segment(s) then goes back to the XRCF where Ball performs final cryogenic acceptance testing on the segments before shipping to NASA's Goddard Space Flight Center, Greenbelt, Md. where personnel from the ITT Corporation, Rochester, New York, assemble the telescope and attach it to the instrument module. Acoustic and vibration testing of the fully integrated telescope/instrument module are performed there, too.

The last legs of the beryllium mirror's journey bring it to NASA's Johnson Space Center, Houston, Texas for final cryogenic testing of the whole telescope, followed by Northrop Grumman, Redondo Beach, Calif. for integration of the assembly with the spacecraft and sunshield. Once completed, the entire James Webb Space Telescope is shipped to the Guiana Space Centre, Kourou, French Guiana, for lift-off on an Ariane 5 rocket for lift-off.

To see the beryllium mines that helped create the telescope mirror in this new "Behind the Webb" video, visit:
http://webbtelescope.org/webb_telescope/behind_the_webb/9

For more information about the Webb's mirrors, visit:
http://www.nasa.gov/topics/technology/features/jwst_mirror.html

To download the "Journey of the Webb Mirrors," visit:
http://jwst.nasa.gov/resources/journey_mirrors_flyer.pdf