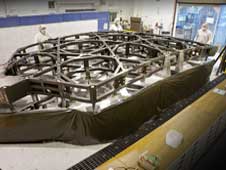 › Larger image
The center section of the James Webb Space Telescope flight backplane, or Primary Mirror Backplane Support Structure, at ATK’s manufacturing facility in Magna, Utah. Credit: ATK The center section of the backplane structure that will fly on NASA's James Webb Space Telescope has been completed, marking an important milestone in the telescope's hardware development. The backplane will support the telescope's beryllium mirrors, instruments, thermal control systems and other hardware throughout its mission.

"Completing the center section of the backplane is an important step in completing the sophisticated telescope structure," said Lee Feinberg, optical telescope element manager for the Webb telescope at NASA's Goddard Space Flight Center in Greenbelt, Md. "This fabrication success is the result of innovative engineering dating back to the technology demonstration phase of the program." 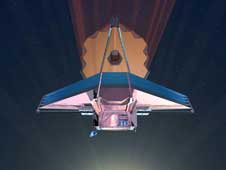 › Larger image
Artist's concept of the James Webb Space Telescope in orbit. Credit: NASA Measuring approximately 24 by 12 feet yet weighing only 500 pounds, the center section of the backplane meets unprecedented thermal stability requirements. The backplane holds the alignment of the telescope's optics through the rigors of launch and over a wide range of operating temperatures, which reach as cold as - 406 degrees Fahrenheit. During science operations, the backplane precisely keeps the 18 primary mirror segments in place, permitting the mirrors to form a single, pristine shape needed to take sharp images.

The Northrop Grumman Corporation in Redondo Beach, Calif., and its teammate ATK in Magna, Utah, completed construction of the center section. Northrop Grumman is under contract to Goddard for the design and development of Webb's sunshield, telescope and spacecraft. ATK manufactured 1,781 composite parts of the center section using lightweight graphite materials and advanced manufacturing techniques.

Successor to the Hubble Space Telescope, the Webb telescope is the world's next-generation space observatory and will be the most powerful space telescope ever built. It will observe the most distant objects in the universe, provide images of the very first galaxies ever formed and study planets around distant stars. The Webb telescope is a joint project of NASA, the European Space Agency and the Canadian Space Agency.

› "Behind the Webb" series video about the backplane