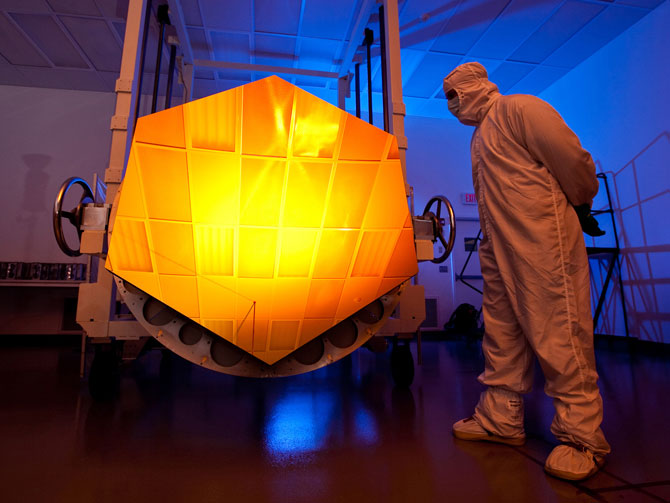 NASA's James Webb Space Telescope is a wonder of modern engineering. As the planned successor to the Hubble Space telescope, even the smallest of parts on this giant observatory will play a critical role in its performance. A new video takes viewers behind the Webb's mirrors to investigate "actuators," one component that will help Webb focus on some of the earliest objects in the universe.

The video called "Got Your Back" is part of an on-going video series about the Webb telescope called "Behind the Webb." It was produced at the Space Telescope Science Institute (STScI) in Baltimore, Md. and takes viewers behind the scenes with scientists and engineers who are creating the Webb telescope's components. During the 3 minute and 12 second video, STScI host Mary Estacion interviewed people involved in the project at Ball Aerospace in Boulder, Colo. and showed the actuators in action.

The Webb telescope will study every phase in the history of our universe, ranging from the first luminous glows after the big bang, to the formation of solar systems capable of supporting life on planets like Earth, to the evolution of our own solar system. Measuring the light this distant light requires a primary mirror 6.5 meters (21 feet 4 inches) across – six times larger than the Hubble Space telescope’s mirror!

Launching a mirror this large into space isn’t feasible. Instead, Webb engineers and scientists innovated a unique solution – building 18 mirrors that will act in unison as one large mirror. These mirrors are packaged together into three sections that fold up - much easier to fit inside a rocket. Each mirror is made from beryllium and weighs approximately 20 kilograms (46 pounds). Once in space, getting these mirrors to focus correctly on faraway galaxies is another challenge entirely. Actuators, or tiny mechanical motors, provide the answer to achieving a single perfect focus.

Lee Feinberg, Webb Optical Telescope Element Manager at NASA's Goddard Space Flight Center in Greenbelt, Md. explained "Aligning the primary mirror segments as though they are a single large mirror means each mirror is aligned to 1/10,000th the thickness of a human hair. This alignment has to be done at 50 degrees above absolute zero! What's even more amazing is that the engineers and scientists working on the Webb telescope literally had to invent how to do this."

To see the actuators being attached to the back of a telescope mirror in this new "Behind the Webb" video, visit:
http://webbtelescope.org/webb_telescope/behind_the_webb/7