The James Webb Space Telescope marked a year of significant progress in 2011 as it continues to come together as NASA's next generation space telescope. The year brought forth a pathfinder backplane to support the large primary mirror structure, mirror cryotesting, creation of mirror support structures, several successful sunshield layer tests and the creation of an assembly station within NASA Goddard Space Flight Center's cleanroom. Achievements were also made in the areas of flight and communications software and the propulsion system. 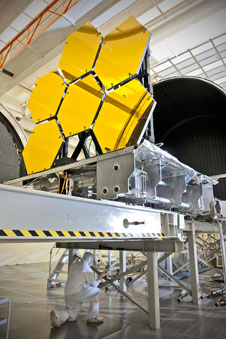 › View larger
The first six flight ready James Webb Space Telescope's primary mirror segments are prepped to begin final cryogenic testing at NASA's Marshall Space Flight Center in Huntsville, Ala. Credit: NASA/Chris Gunn In December, manufacturing and testing of all flight mirrors was completed in a final test at the X-ray and Calibration Facility at Marshall Space Flight Center, Huntsville, Ala. During these tests mirror segments were chilled to temperatures similar to those Webb will see in space, around minus 400 degrees Fahrenheit.

It was the culmination of work started in 2003. Heeding lessons learned from the Hubble Space Telescope, the program adopted the strategy of tackling the most difficult technical challenges first. That decision proved to be the right one. In June, all 18 flight primary mirror segments, plus the secondary, tertiary and fine steering mirrors, were polished and coated yielding exquisite surfaces that will enable Webb to image the most distant galaxies.

Two of Webb’s supporting and pathfinder structures were also completed. To assemble the flight telescope on the ground, a 139,000 pound structure will install the flight mirrors using an overhead track system supporting a robotic arm. The huge platform has been completed and assembled in the ultra-clean room used for telescope assembly at Goddard.

Also finished was the pathfinder backplane, a full-scale engineering model of the center section of the flight backplane. The backplane holds the mirror segments in place to form a single primary mirror. The full pathfinder element will consist of 12 of the 18 hexagonal cells (the center section of the primary mirror) of the telescope and contain a subset of two primary mirror segment assemblies, the secondary mirror, and the subsystem containing the tertiary and fine steering mirrors. It will demonstrate integration and test procedures that will be used on the flight telescope.

Webb’s giant sunshield moved forward into a new testing phase last year, the final step before fabrication of the flight sunshield. Sunshield layer three became the first of five full-size flight-like layers stretched out in a fully simulated flight configuration. This enables engineers to make 3-D shape measurements that will tell them how the full-size sunshield layers will behave in space. Completing this test is a critical step in the sunshield’s development and gives the engineers confidence and experience needed to manufacture the five flight layers.

An important sunshield deployment flight structure also completed fabrication in 2011. The space-qualified graphite composite tubes that will enable the sunshield to deploy in space have finished fabrication. The telescoping tube system was designed at Astro Aerospace, a business unit of Northrop Grumman. 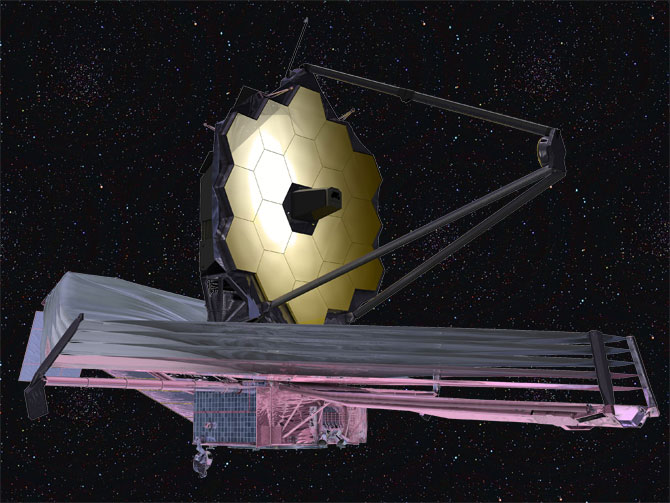 Successor to the Hubble Space Telescope, the James Webb Space Telescope is the world’s next-generation space observatory. It is the most powerful space telescope ever built. Webb will observe the most distant objects in the universe, provide images of the very first galaxies ever formed and study planets around distant stars. The Webb Telescope is a joint project of NASA, the European Space Agency and the Canadian Space Agency.