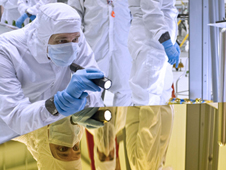 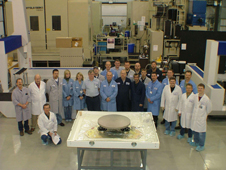 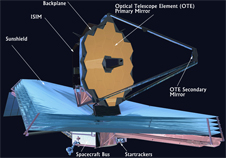 This artist's rendition of the James Webb Space Telescope shows where the primary and secondary mirrors are located. Credit: NASA
› Larger image It takes two unique types of mirrors working together to see farther back in time and space than ever before, and engineers at NASA's Goddard Space Flight Center have just received one of each type. Primary and Secondary Mirror Engineering Design Units (EDUs) have recently arrived at NASA's Goddard Space Flight Center in Greenbelt, Md. from Northrop Grumman Aerospace Systems in Redondo Beach, Calif. and are undergoing examination and testing. When used on the James Webb Space Telescope those two types of mirrors will allow scientists to make those observations.

"The Primary mirror EDU will be used next year to check out optical test equipment developed by Goddard and slated to be used to test the full Flight Primary mirror," said Lee Feinberg, the Optical Telescope Element Manager for the Webb telescope at NASA Goddard. "Following that, the primary and secondary EDU's will actually be assembled onto the Pathfinder telescope. The Pathfinder telescope includes two primary mirror segments (one being the Primary EDU) and the Secondary EDU and allows us to check out all of the assembly and test procedures (that occur both at Goddard and testing at Johnson Space Center, Houston, Texas) well in advance of the flight telescope assembly and test."

The primary mirror is actually composed of 18 smaller hexagonal mirrors that are assembled together into what appears to be a giant hexagon that sits atop the Webb telescope's sunshield. Webb Telescope's scientists and engineers determined that a primary mirror measuring 6.5 meters (21 feet 4 inches) across is what was needed to measure the light from these distant galaxies. Each of these mirrors is constructed from beryllium, a light and strong metal. Each of the 18 mirror segments weighs approximately 20 kilograms (46 pounds).

Why are the mirrors hexagonal shaped? Because a hexagon allows a segmented mirror to fit together without gaps. When Webb's primary mirror is focused on a distant star for example, that image will appear in all 18 mirror segments. To focus on the star and get one image, the mirror segments can then be tilted to align the 18 separate images into a single image.

The primary mirror EDU that arrived at Goddard is also a flight spare. That means it can be used on the actual telescope. In fact, it could even be put on the telescope now if needed.

Afterward, the mirror segment went back to the X-ray and Cryogenic Facility (XRCF) in Huntsville, Ala., where Ball performed final cryogenic acceptance testing on the segment before it came to NASA Goddard.

The secondary EDU at Goddard is not coated but can be, so it can be a flight spare once coated.

Eventually, the final flight mirrors will all come to NASA Goddard and be assembled on the telescope and the instrument module. Then, as a complete unit it will undergo acoustic and vibration testing at Goddard.