The structural mechanics and concepts branch engineers are going back to the past to try to explore the future. Most of them were involved with large space structure research done at NASA's Langley Research Center from the 70s to the early 90s. Now they're dusting off some of the hardware to see if the concepts would work in the 21st century.

"Back almost 20 years ago we were doing research in how to build large space telescopes that astronauts could put together on orbit during a space walk," said senior researcher John Dorsey. "Since NASA is now looking at in-space operations to support Near Earth Object missions as well as satellite servicing, we are going back here at Langley and starting to look at telescope assembly again. But now because we are working in the human robotics systems project we are going to try to do it with robots." 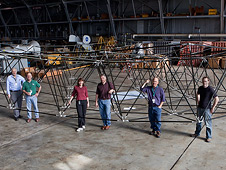 L to R: George Ganoe, John Dorsey, Judith Watson, Tim Collins, David Mercer and Tom Jones assembled a giant three-dimensional truss system, which has been in storage for years, so it could be shipped to a new robotics center at West Virginia University. Credit: NASA/Sean Smith

Dorsey and five others recently spent about three and a half hours in a corner of the Langley aircraft hangar -- the only place big enough to construct the almost 46-foot wide (14 meter) node and strut superstructure indoors. The truss system, which has been in storage for years, was developed as part of a four-year program called the Precision Segmented Reflector that ended in 1992. The program goal, which was successfully accomplished, was to come up with a structural configuration that was lightweight, low-cost, compactly stored and easy to put together. Reflectors could then be attached to the truss structure to form a space telescope mirror.

"What we're doing now is inventorying the parts and all the mechanical components and making sure they work okay," added Dorsey. "The easiest way to do that was to put the giant structure together."

Immediately after the team put the three-dimensional puzzle of the 315 struts and 84 nodes together -- they took it apart and packed it into six crates. Langley is shipping the crates to a new robotics center at West Virginia University that was built with support of a grant from NASA's Goddard Space Flight Center.

"We've been collaborating with Goddard, which has a lot of experience in Hubble repair missions," said researcher Dorsey. "Now they're doing work in robotic satellite servicing and already have experience with robotic operations on orbit. Goddard has a continuing grant with the facility at West Virginia University."

Langley and Goddard researchers will consult and work with the WVU robotics center team to help develop the machines and procedures needed to assemble the massive rod and joint telescope mirror platform.