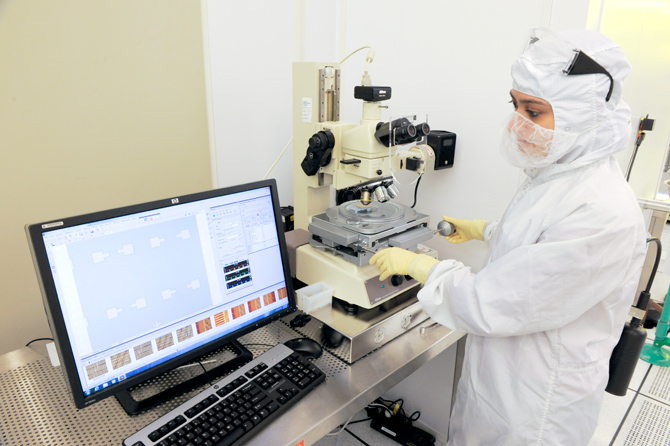 › View larger
Goddard technologist Mahmooda Sultana is investigating two new applications for graphene, a trailblazing technology with unique physical characteristics that make if ideal for all type of spaceflight uses. Credit: NASA/Pat Izzo
Tiny sensors -- made of a potentially trailblazing material just one atom thick and heralded as the “next best thing” since the invention of silicon -- are now being developed to detect trace elements in Earth’s upper atmosphere and structural flaws in spacecraft.

Technologist Mahmooda Sultana, who joined NASA’s Goddard Space Flight Center in Greenbelt, Md., two years ago and has since emerged as Goddard’s go-to expert in the development of graphene-based technology, has expanded her portfolio to include two new research and development efforts aimed at creating nano-sized detectors that could detect atomic oxygen and other trace elements in the upper atmosphere and structural strains in everything from airplane wings to spacecraft buses.

“The cool thing about graphene is its properties,” said Jeff Stewart, the acting assistant chief for technology for Goddard’s Mechanical Systems Division. “It offers a plethora of possibilities. Frankly, we’re just getting started.”

Graphene, first discovered in 2004 by Russian-born scientists Andre Geim and Konstantin Novoselov, is just one atom thick and composed of carbon atoms arranged in tightly bound hexagons best visualized as atomic-scale chicken wire. Two hundred times stronger than structural steel, it not only is the strongest material ever measured, but also the most sensitive and stable at extreme temperatures, making it ideal for all types of uses. Since its discovery, hundreds of organizations worldwide have launched research efforts to take advantage of the material’s unique properties.

Goddard is one in the growing contingent.

More than a year ago, Sultana and her team won research and development funding to set up production facilities and fine-tune processing techniques for fabricating graphene using a technique called chemical vapor deposition (CVD), a technique also used in manufacturing computer chips. With this approach, technicians place a metal substrate inside a vacuum chamber and inject gases that then react or decompose to produce the desired thin film.

Since then, the group has succeeded at manufacturing and processing relatively large, high-quality pieces of graphene, and is now ready to apply its expertise to advance other applications. “One of the most promising applications of this material is as a chemical sensor,” Sultana said.

She has teamed with retired Goddard scientist Fred Herrero, who is pursuing the research in an emeritus capacity, to develop a miniaturized, low-mass, low-power, graphene-based detector that could measure the amount of atomic oxygen in the upper atmosphere. Atomic oxygen in the upper atmosphere is created when ultraviolet radiation from the sun breaks apart oxygen molecule (O2). The resultant reactive element is highly corrosive. As satellites fly through the upper atmosphere, the chemical strikes them at about five miles per second. The impacts destroy commonly used spacecraft materials, such as Kapton.

Although scientists believe atomic oxygen makes up 96 percent of the thin atmosphere in low-Earth orbit, Herrero is interested in measuring its density and determining more precisely its role in creating atmospheric drag, which can cause orbiting spacecraft to lose altitude prematurely and plunge to Earth. “We still don’t know the impact of atomic elements on spacecraft in creating a drag force,” he said. “We don’t know how much momentum is transferred between the atom and the spacecraft. This is important because engineers need to understand the impact to estimate the lifetime of a spacecraft and how long it will take before the spacecraft reenters Earth’s atmosphere.”

Research has shown that graphene-based sensors offer a good solution, Sultana said. When graphene absorbs atomic oxygen, it oxidizes, producing a change in the material’s electrical resistance that a graphene-based sensor could then quickly count to produce a more accurate density measurement. “I’m really excited about this material’s possibilities,” Herrero said, adding that graphene would greatly simplify the steps needed to measure atomic oxygen. “We’d be counting how often the resistance changes.”

Atomic oxygen isn’t the only element the chemical sensor could measure, Sultana said. She also believes it’s ideal for measuring methane, carbon monoxide, and other gases on other planetary bodies and monitoring outgassing that sometimes contaminates instrument optics. She plans to fabricate and test the first generation of graphene-based chemical sensors by the end of the fiscal year, she said. “This is at a very early stage,” Sultana added.

Graphene’s unique attributes also make it a viable candidate for detecting stresses in spacecraft components, she said. With her collaborators at the Massachusetts Institute of Technology (MIT), the team is using support from NASA’s Office of the Chief Technologist to advance a small sensor that could be embedded in spacecraft materials, including composites. If the material underwent some type of stress, the tiny sensors would detect it.

The team has used CVD to manufacture and test a large piece of graphene, whose electrical properties are sensitive to detecting stresses, Sultana said. Her MIT collaborators now are fabricating graphene devices and her team is wiring them to read out measurements — much like the medical electrodes used for certain medical tests. However, Sultana plans to eliminate the wiring so that it operates autonomously, she said.

“This could be deployed in a non-invasive way,” Stewart said. “Right now, we use relatively large devices to detect damage or potential sources of failure, but with autonomous graphene-based sensors our hope is that we could put them into the material itself.”

“We can employ a different combination of its extreme properties and use the same material for different sensing applications,” Sultana added. “That’s the beauty of graphene.”