Grow Text SizeShrink Text Size
NASA Studying Ways to Make 'Tractor Beams' a Reality
Tractor beams -- the ability to trap and move objects using laser light -- are the stuff of science fiction, but a team of NASA scientists has won funding to study the concept for remotely capturing planetary or atmospheric particles and delivering them to a robotic rover or orbiting spacecraft for analysis.

The NASA Office of the Chief Technologist (OCT) has awarded Principal Investigator Paul Stysley and team members Demetrios Poulios and Barry Coyle at NASA's Goddard Space Flight Center in Greenbelt, Md., $100,000 to study three experimental methods for corralling particles and transporting them via laser light to an instrument -- akin to a vacuum using suction to collect and transport dirt to a canister or bag. Once delivered, an instrument would then characterize their composition. 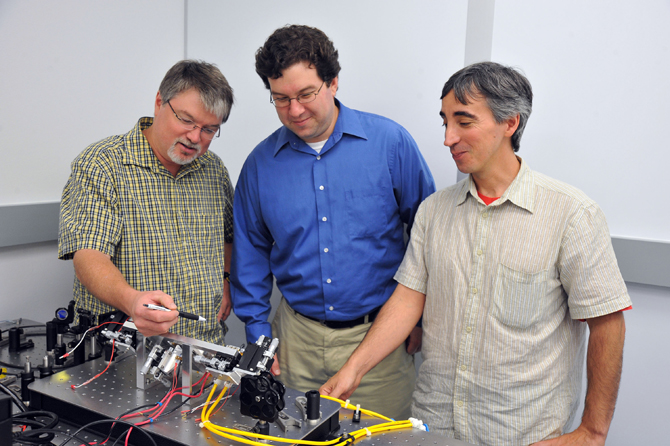 "Though a mainstay in science fiction, and Star Trek in particular, laser-based trapping isn't fanciful or beyond current technological know-how," Stysley said. The team has identified three different approaches for transporting particles, as well as single molecules, viruses, ribonucleic acid, and fully functioning cells, using the power of light.

"The original thought was that we could use tractor beams for cleaning up orbital debris," Stysley said. "But to pull something that huge would be almost impossible -- at least now. That's when it bubbled up that perhaps we could use the same approach for sample collection."

With the Phase-1 funding from OCT's recently reestablished NASA Innovative Advanced Concepts (NIAC) program designed to spur the development of "revolutionary" space technologies, the team will study the state of the technology to determine which of the three techniques would apply best to sample collection. OCT received hundreds of proposals, ultimately selecting only 30 for initial funding.

Currently, NASA uses a variety of techniques to collect extraterrestrial samples. With Stardust, a space probe launched in 1999, the Agency used aerogel to gather samples as it flew through the coma of comet Wild 2. A capsule returned the samples in 2006. NASA's next rover to Mars, Curiosity, will drill and scoop samples from the Martian surface and then carry out detailed analyses of the materials with one of the rover's many onboard instruments, including the Goddard-built Sample Analysis at Mars instrument suite. 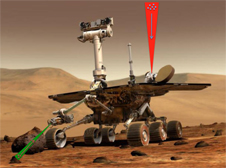 Goddard technologists are studying different techniques for corralling particles and transporting them via laser light to instruments on rovers and orbiting spacecraft. Concept image courtesy Dr. Paul Stysley
› Larger image "These techniques have proven to be largely successful, but they are limited by high costs and limited range and sample rate," Stysley said. "An optical–trapping system, on the other hand, could grab desired molecules from the upper atmosphere on an orbiting spacecraft or trap them from the ground or lower atmosphere from a lander. In other words, they could continuously and remotely capture particles over a longer period of time, which would enhance science goals and reduce mission risk."

One experimental approach the team plans to study -- the optical vortex or "optical tweezers" method -- involves the use of two counter-propagating beams of light. The resulting ring-like geometry confines particles to the dark core of the overlapping beams. By alternately strengthening or weakening the intensity of one of the light beams -- in effect heating the air around the trapped particle -- researchers have shown in laboratory testing that they can move the particle along the ring's center. This technique, however, requires the presence of an atmosphere.

Another technique employs optical solenoid beams -- those whose intensity peaks spiral around the axis of propagation. Testing has shown that the approach can trap and exert a force that drives particles in the opposite direction of the light-beam source. In other words, the particulate matter is pulled back along the entire beam of light. Unlike the optical vortex method, this technique relies solely on electromagnetic effects and could operate in a space vacuum, making it ideal for studying the composition of materials on one of the airless planetary moons, for example.

The third technique exists only on paper and has never been demonstrated in the laboratory, Poulios said. It involves the use of a Bessel beam. Normal laser beams when shined against a wall appear as a small point. With Bessel beams, however, rings of light surround the central dot. In other words, when seen straight on, the Bessel beam looks like the ripples surrounding a pebble dropped in a pond. According to theory, the laser beam could induce electric and magnetic fields in the path of an object. The spray of light scattered forward by these fields could pull the object backward, against the movement of the beam itself.

"We want to make sure we thoroughly understand these methods. We have hope that one of these will work for our purposes," Coyle said. "Once we select a technique, we will be in position to then formulate a possible system" and compete for additional NIAC funding to advance the technology to the next level of development. "We're at the starting gate on this," Coyle added. "This is a new application that no one has claimed yet."