The Thermal Infrared Sensor (TIRS) that will fly on the next Landsat satellite came out of its first round of thermal vacuum testing Tuesday, October 4 at NASA's Goddard Space Flight Center, Greenbelt, Md. 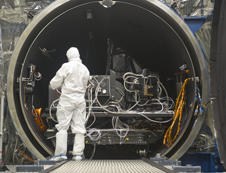 A technician surveys the TIRS instrument and the calibration equipment, preparing to move to the clean room after testing. Credit:NASA/Goddard/Bill Hrybyk
› Larger image 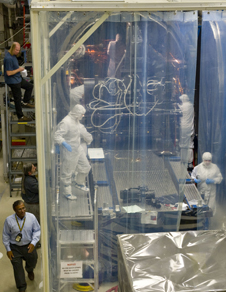 The TIRS instrument sits half out of the thermal vacuum chamber while still protected in a clean tent, as team members disconnect the electrical wires and cooling lines after testing. Credit:NASA/Goddard/Bill Hrybyk
› Larger image 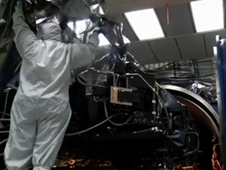 Technicians prepare the TIRS instrument to move to the clean room after testing. Credit: NASA/Goddard
› Larger image The two-month test marked the first time engineers evaluated the fully-assembled instrument at its normal operating temperature, a frigid 43 Kelvin (-382° F). The verdict is that TIRS is living up to its design and even exceeding expectations in some areas. The thermal imager is one of two instruments that will fly on the Landsat Data Continuity Mission (LDCM) scheduled to launch in December 2012. A late addition to the mission, TIRS is designed and built in-house at Goddard. It uses a new detector technology called Quantum Well Infrared Photodetectors, or QWIPs, that will continue and improve upon the thermal infrared data collected by the Thematic Mapper on Landsat 5 and by the Enhanced Thermal Mapper-Plus on Landsat 7, both currently collecting data in orbit.

One of the important applications of TIRS will be to help scientists and resource managers monitor water evaporation and transpiration over Earth's land surface by measuring radiation emitted in two thermal bands of the electromagnetic spectrum. TIRS's resolution is 100 meters, which allows monitoring on a field-by-field basis for agriculture. This type of detail is vital for water managers in the semi-arid western U.S. states.

Three shifts of engineers manned the testing facility at Goddard 24-7 while TIRS was in the thermal-vacuum test chamber. Inside the blue cylindrical chamber, TIRS viewed targets that provided calibrated thermal illumination for TIRS to sense and sent data to a computer that simulated the spacecraft. The air was pumped out and the temperature in the chamber lowered with liquid nitrogen. Then the instrument's cryocooler was turned on. The cryocooler's job is to maintain a steady 43 K for the three detector arrays even when the chamber temperature goes up and down -- mimicking the temperature changes on the light and dark sides of Earth in space as the satellite orbits our planet.

"In many areas TIRS is even exceeding its requirements," says Deputy Instrument Manager Betsy Forsbacka at NASA Goddard.

A few surprises occurred as well, including the cryocooler working more efficiently than expected and cooling the detectors an extra 5 degrees Kelvin -- good news for the heat-sensitive detector arrays. But these kinds of surprises are normal at this stage of testing, and finding them now means the team has time to understand and adjust procedures for operating the instrument, says Forsbacka.

As TIRS heads into environmental testing, including another round in the thermal vacuum chamber, the engineering team is working hard to iron out the kinks to meet their tight delivery deadline. The schedule is "the elephant in the room," says Forsbacka, but she is confident they'll make it. "The big things are going right," she says. And for an instrument that usually takes four years to make space-ready, she adds that the team has gone above and beyond. "We're this close to building an instrument in three years that nobody thought we could do."

TIRS is scheduled to be on the dock and ready for integration with the LDCM spacecraft at Orbital Science Corp. in Gilbert, Ariz. in late January, 2012.