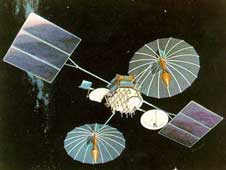 Launched on March 13, 1989, from onboard Space Shuttle Discovery, TDRS-4 operated in geosynchronous (GEO) altitude at more than 22,000 miles above the Atlantic Ocean region. As part of the spacecraft's end-of-mission activities, its orbit was raised above the congested geosynchronous orbit.

TDRS-4 was forced to retire after the loss of one of three Nickel-Cadmium (24 cell) batteries and the reduction in storage capacity for the two remaining batteries that power the satellite. Retirement for the satellite consisted of excess fuel depletion, disconnecting batteries, and powering down the Radio Frequency Transmitters and receivers so that the satellite is completely and permanently passive. This ensures the satellite will never interfere with other satellites from the radio frequency perspective.

This is the second retirement from within the fleet of TDRS. The fleet of seven remaining satellites operates through a supporting ground system and together they make up the Space Network (SN). The SN provides highly automated, user-driven services supporting customer spacecraft with tracking and data acquisition. The network supports a varied number of missions, including the International Space Station, Hubble Space Telescope, launch vehicles, and a variety of other science missions. The SN also provided primary communication support to the Space Shuttle Project. 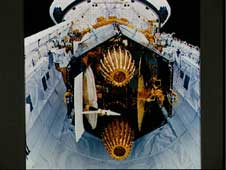 › Larger image
TDRS-4 onboard space shuttle Discovery about to deploy during STS-29. Credit: NASA This is the second end-of-mission execution for the fleet of aging first generation TDRS spacecraft. TDRS-4's retirement was preceded by TDRS-1, which was decommissioned and raised to its permanent orbit in June 2010.

Together they provide customers with global space to ground communication services.

To continue this critical lifeline, NASA has contracted Boeing to build three additional follow-on TDRS spacecraft, replenishing TDRS-1 and TDRS-4, and expanding NASA's communication services. TDRS-K is scheduled for launch in December of this year followed by TDRS-L in 2013 and TDRS-M in 2015.

The SN is managed by GSFC and its primary ground communications facility is located at the White Sands Complex in Las Cruses, NM. The Human Exploration and Operations Mission Directorate and the Space Communications and Navigation Program at NASA Headquarters fund NASA's Space Network. Nicole Hagey and Dewayne Washington
NASA's Goddard Space Flight Center, Greenbelt, Md.
› Back To Top