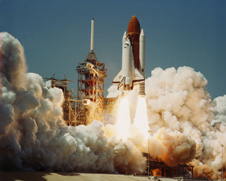 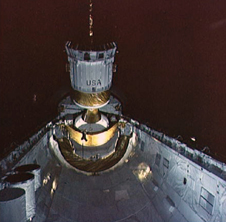 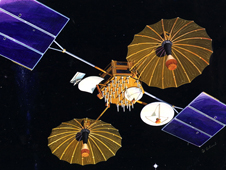 The next day, astronauts released TDRS-A from the shuttle cargo bay. Thirty-nine adjustments burns later, it achieved geosynchronous orbit around the equator traveling 22,300 miles above Earth. Once operational, TDRS-A was renamed TDRS-1 and a new era in spacecraft-to-ground communications for NASA had begun.

"The launch of the first TDRS spacecraft 30 years ago opened a new era for satellite communications," said Jeff Volosin, deputy associate director, Exploration and Space Communication at NASA's Goddard Space Flight Center in Greenbelt, Md. "This revolutionary network, the only one of its kind in the world, has enabled NASA's astronauts and robots to relay their outstanding scientific achievements to Earth."

During the Mercury, Gemini and Apollo flights, NASA relied on ground stations positioned around the world to provide a communication network. At best this ground-based network could support about 15 percent of a spacecraft's orbit. The TDRS Project was established in 1973 to design a new communication concept for NASA's Space Network. It was to rely less on international ground stations, while providing long-duration communication coverage.

The new space network design would consist of geosynchronous communication satellites and two ground stations. It would provide NASA's most critical low-Earth-orbiting spacecraft continuous communication, including the newly launched space shuttle fleet. The network would support as many as 26 user satellites simultaneously.

This new communication network would not process user traffic, but operate as a "bent-pipe" repeater. TDRS would relay signals and data between the user's spacecraft and ground terminal. Other TDRS advantages included the ability to significantly increase the volume of data sent to Earth while providing 100 percent coverage to low-Earth-orbiting spacecraft. TDRS was also expected to reduce the escalating operation costs by eliminating dozens of worldwide tracking and communications ground stations.

On Nov. 4, 1982, TDRS-A was shipped from TRW's (later to become Northrup Grumman) California plant, arriving at NASA's Kennedy Space Center, Fla., on Nov. 14. At the time of launch, TDRS-A was the largest, most sophisticated communication satellite ever built, weighing about 5,000 pounds.

"Once operational, TDRS-1 allowed the eighth shuttle mission to downlink more engineering and science data than the previous seven missions combined," said Volosin. "This capability continued to grow until the TDRS network could provide full orbit coverage for any satellite in low-Earth orbit."

The triangle shaped space network was completed in 1989 with the deployment of TDRS-4. A total of 11 satellites have been built and all have become operational except for TDRS-B, which was lost during the space shuttle Challenger accident.

From 2000-2002, NASA launched the H, I and J satellites, establishing the second generation of TDRS. They were built by Hughes, which later became Boeing, also the builder of the third generation. The ground segment for the TDRS network is comprised of a ground station in White Sands, N.M., and another in Guam.

During the operational lifespan of TDRS-1, network users included Landsat-4, Spacelab, Hubble, the Cosmic Background Explore (COBE), Gamma Ray Observatory (GRO) and the Upper Atmosphere Research Satellite (UARS) and a host of other satellites. In later years, the TDRS-1 orbit inclination was increased allowing for communications through the satellite for portions of a day, with the North and South poles. Designed to operate for 10 years, TDRS-1 was retired in 2009 and decommissioned in 2010, after 27 years of on-orbit service.

NASA has begun the build and deployment of the third generation of TDRS spacecraft. TDRS-K was launched on Jan. 30. TDRS-L is scheduled for 2014, and the TDRS-M launch readiness date is December 2015. Thirty years after the first launch, the TDRS network has become NASA's critical communication link in the agency's ability to support the continuing work of understanding our planet and beyond.