Researchers from NASA's Jet Propulsion Laboratory (JPL), Pasadena, Calif. and Massachusetts Institute of Technology (MIT), Cambridge, Mass., are using a new gridding method that projects the faces of a cube onto the surface of a sphere. They found that this method covers the sphere more uniformly than a latitude-longitude grid, and that it produces more accurate results near Earth's poles.

"The NASA Advanced Supercomputers (NAS) facilities at Ames Research Center have been critical to our cube-based approach. We were able to scale the cube at higher resolutions to improve model accuracy," said Chris Hill, a MIT science researcher. "Without the NAS resources, both hardware and people, we would not have been able to perform these calculations in a timely manner." 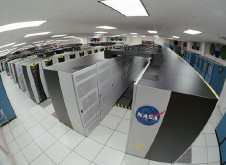 The NAS facilities have been critical to the initial cube computation, which was carried out on the NAS SGI Altix system, Columbia. More recently it has been moved to the NAS Pleiades cluster facility. Photo Credit: NASA Scientists believe the ocean and its interactions with the atmosphere are key to studying climate change. To better understand these interactions, they identified three important areas in climate research. They look at the 'states' of the ocean and sea-ice, which includes their temperature, salinity, current speeds, and sea-surface elevation, and study their changes at and below the surface. They also look at the 'state' of the atmosphere, which includes its temperature, humidity, and wind patterns, and study how it was affected by the changes in the ocean. These interactions between the atmosphere and ocean directly affect the weather, according to Hill. Finally, the scientists study the biological activity in the ocean and its responses to the changing 'state' of the ocean.

Following work begun by Carl Wunsch and colleagues at MIT as part of the World Ocean Circulation Experiment, a NASA-sponsored project called Estimating the Circulation and Climate of the Ocean, Phase II (ECCO2), is modeling the global ocean currents and their fluctuations, the changes in temperature and salinity, and the growth and melting of sea-ice in the polar regions.

The project's goal is to produce quantitative images of the state of the ocean globally, including its evolution. These images use data from all available NASA satellites and from on-site instruments, and are the result of combining and assimilating these data into global full-ocean-depth and sea-ice configurations built by the MIT general circulation model (MITgcm). These data combinations, called data syntheses, help quantify the role of the ocean in the global carbon cycle, explain the recent evolution of the polar oceans, and monitor time-evolving balances within and between different components of the Earth system.

The first Earth-orbiting satellite designed for remote sensing of Earth's ocean was the Seasat mission, which was launched in 1978. Since then, NASA has developed a series of ocean observing satellites that monitor sea surface elevation and temperature, surface wind stress, and the ocean's gravitational field. Part of this series is NASA’s Earth Observing System, which is the data system used by ECCO2 today.

According to Dimitris Menemenlis, a JPL Earth scientist and ECCO2 researcher, the available oceanographic data will be enhanced by two forthcoming satellites: the Aquarius and the Surface Water Ocean Topography (SWOT) missions. Both satellites will provide different information that will be assimilated into a single coherent picture of the ocean state. Aquarius is due to launch in 2010 and will provide global maps of sea surface salinity. The SWOT mission is still in development and aims to observe sea surface elevation with unprecedented resolution and spatial coverage.

In the past, the standard model gridding methods, using longitude and latitude, had difficulty assimilating data at the poles. To solve this problem, researchers started looking at the world in a new way, using a new cube-based method. But advanced computers and algorithms were needed to enable modeling at higher resolutions, said Hill.

"Currently, NAS is home to two of the fastest supercomputers in the world, Pleiades and Columbia," said William Thigpen, NAS manager at Ames Research Center. "NAS provides data analysis, visualization tools and support that enable the exploration of huge data-sets that provide insights not previously possible."

Initially, the cube-based computation was simulated on the NAS SGI Altix system, Columbia, but was later moved to the NAS Pleiades cluster facility to take advantage of the increased size and performance of the new supercomputer's architecture. Over time and with improvements, supercomputing evolved into 'green technology.' Using a total of 2.09 megawatts, or 233 megaflops per watt, Pleiades ranked number 22 on the November 2008 Green500 list. This ranking makes Pleiades the second-most powerful and energy-efficient supercomputer in the world.

According to Menemenlis, these improvements have increased the accuracy of ocean data syntheses to such an extent that they are starting to resolve ocean eddies and other narrow currents, which transport heat, carbon, and other properties within the ocean. The importance of this endeavor is recognized by numerous national and international organizations, such as the World Meteorological Organization's World Climate Research Programme and the United Nations Educational, Scientific and Cultural Organization's (UNESCO) Intergovernmental Oceanographic Commission.