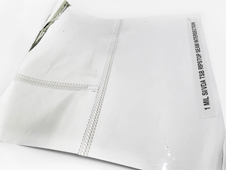 Close up of the Kapton material that the Webb Sunshield was created from. Credit: NASA
› Larger image 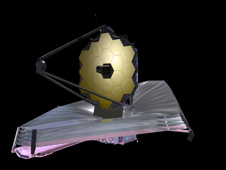 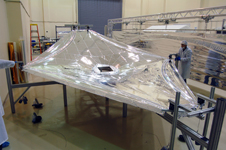 Caption: The 1/3 scale sunshield layer 5 under tension testing at the Nexolve facility in Hunstville, Ala. Credit: NASA
› Larger image The James Webb Space Telescope has a unique shield to protect its sensitive instruments from the heat and light of the sun. The sunshield is like an umbrella popping open on the shores of the cosmos that allows the instruments beneath it to see far into the universe.

Like a beach umbrella protects people from the sun's heat and ultraviolet radiation, the sunshield protects the telescope and the sensitive infrared instruments that fly beneath the Webb telescope's sunshield from our sun's heat and light. "Each of the five layers of the shield is less than half the thickness of a piece of paper. The five work together to create an effective SPF (or Sun Protection Factor) of 1,000,000," said John Durning, Deputy Project Manager for the James Webb Space Telescope Project, at NASA's Goddard Space Flight Center, Greenbelt, Md.

A new video takes viewers to Northrop Grumman's Astro Aerospace in Carpinteria, Calif. to understand the mechanics necessary to unfold the large tennis-court sized sunshield. In the 3:00 minute video, engineers are interviewed to explain how the new technology extends the sunshield in space and unfurls it before the Webb telescope attains orbit one million miles from Earth.

The video called "Stretching Webb's Wings" is part of an on-going video series about the Webb telescope called "Behind the Webb." It was produced at the Space Telescope Science Institute (STScI) in Baltimore, Md. and takes viewers behind the scenes with scientists and engineers who are creating the Webb telescope's components.

The large sunshield is 20 meters (65.6 ft.) by 12 meters (39.3 ft.). It is made of a material called Kapton that can be folded like a blanket. Kapton is a film developed by DuPont which can remain stable and strong over the wide range of temperatures, from 36K to 650 Kelvin (K) (-395°F to 710°F or -237 to 377°C), the sunshield will experience during its launch and deployment. Once on orbit, the sunshield creates a 330 K (243°F to -351°F) temperature differential between the hottest and coldest layers. Using multiple separated layers allows most of a layer’s heat to radiate to space before it reaches the next one creating a substantial temperature drop from one layer to the next.

The Kapton membranes used on the Webb telescope are coated with infrared-reflecting aluminum. The lowest two sun facing sunshield layers are coated with a silicon-based conductive coating to prevent the buildup of an electric charge, and minimize the amount of absorbed heat from the sun.

When the sunshield is folded up, it is packaged on a large pallet. A boom system being developed at Northrop Grumman Astro-aerospace in Galita, Calif. pulls each side of the sunshield from the pallet. It deploys much like a telescoping radio antenna, or like a big beach umbrella that extends upward and pops into place.

Each of the sunshield's five layers are unfurled and separated out in space to resemble a giant umbrella by spreader bars and cable drives. There are two electrical motor mechanisms called stem deployers, one on each side of the spacecraft. Their job is to "push out" from the inside, the telescoping booms thus pulling out the folded up membranes on each side. "The stem deployer extends the telescoping boom," said Mark Clampin, James Webb Observatory Project Scientist at NASA Goddard. "The metaphor that comes to mind is a sailing boat, except that the sail (membrane) would have to be raised by a telescoping main mast, rather than hoisted up the main mast."

The James Webb Space Telescope will observe primarily the infrared light from faint and very distant objects. But all objects, including telescopes, also emit infrared light in the form of heat energy. To avoid swamping the very faint astronomical signals with radiation from the telescope and the telescope from seeing its own thermal signature, the telescope and its instruments must be very cold, at an operating temperature of under 50 K (-370F/-223C).

The observatory will be pointed so that the Sun, Earth and Moon are always on one side, and the sunshield will act like a beach umbrella, keeping the Optical Telescope Element and the Integrated Science Instrument Module on the telescope's topside cool by keeping them in the shade and protecting them from the heat of the sun and warm spacecraft electronics. The telescope is on the topside and the underside sees the sun.

The Webb telescope will orbit 1,513,000 km (940,000 miles) from Earth at the L2 Lagrange point and is the first deployable optical telescope in space. It will undergo a complex post-launch sequence of deployments including the sunshield, before it becomes fully operational.

The video "Stretching Webb's Wings" will give viewers a unique behind the scenes look at the equipment that will make the sunshield expand almost a million miles from Earth.

To see the sunshield deployment in this new "Behind the Webb" video, visit:
http://webbtelescope.org/webb_telescope/behind_the_webb/8

For more information on the sunshield, visit:
http://www.jwst.nasa.gov/sunshield.html