Just seven days after setting sail for a tiny island off the eastern tip of Puerto Rico on Dec. 26, 2009, Missourian Dennis Clements thought his life was over; his crippled 34-foot Fiberglas sailboat -- buffeted for four days by gale-force winds and high seas -- had capsized, tossing him into the frigid waters of the North Atlantic Ocean.

"At one point, I saw the mast pointed straight down to the bottom of sea, and the boat continued to roll," he said. "I was shaken loose somewhere underwater and when I reached the surface, I could see my boat about 30 feet away... I could see her stand up... She righted herself. She was heavily flooded. There was still a piece of sail and I saw it catch the wind. I saw her sail away and leave me there. And I was alone in the dark, and in the storm, 250 miles from the shore... As I floated there, I knew this was the end. This was how it would end for me." 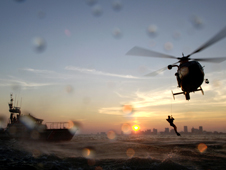 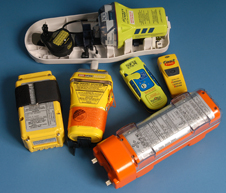 A variety of emergency beacons used to transmit distress signals. All 406 MHz beacons can and should be registered, and Search and Rescue authorities encourage owners of these beacons to do so as registration will help rescue forces find persons in distress faster in an emergency. http://www.beaconregistration.noaa.gov/ Credit: NASA/Goddard/Rebecca Roth
› Larger image 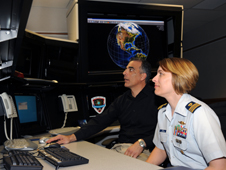 Thanks to NASA technology, the Search and Rescue Satellite-Aided Tracking (SARSAT) program managed by the National Oceanic and Atmospheric Administration (NOAA), and the bravery of military rescuers, Clements was ultimately plucked to safety by a Navy seaman who had been dispatched from the U.S.S. Dwight D. Eisenhower. It was the only vessel within a hundred miles of Clements' location able to respond to the Coast Guard's call for help and attempt the rescue, which took only four minutes once the Navy helicopter arrived on the scene. "It was the bravest thing I've ever seen," Clements said.

In a sense, Clements dramatic rescue began years earlier when he bought a 406 MHz Emergency Position Indicating Radio Beacon (EPIRB), designed for maritime use. When his sailboat, "Gloria Adios" had taken on water, the beacon activated, transmitting an emergency distress signal that NOAA weather satellites equipped with NASA-developed repeaters then relayed back to NOAA-operated ground stations. While Clements battled the storm, which was slowly but surely overwhelming his sailboat, a chain reaction had already been set in place before the rogue wave had even capsized his boat.

Sometime after the beacon began transmitting the emergency alert, SARSAT equipment located hundreds of miles away received the signal and had begun processing it to determine its precise location. The U.S. Coast Guard, which is responsible for at-sea rescues, received the alert and searched the NOAA Registration Database to determine whether the beacon had been registered. Luckily for Clements, he had done so, providing emergency contact numbers and other information that the Coast Guard used to contact Clements' family.

The database is a vital part of the SARSAT program. "We use the database to provide critical information to help expedite the search process, especially if the location of the beacon is not immediately known," said Mickey Fitzmaurice, a space systems engineer for the SARSAT program, the organization that operates the U.S. component of the COSPAS-SARSAT system now comprised of 40 nations.

The beacon on Clements' boat was an older model and did not encode GPS location data, with its signal. However, the ground-station equipment used the Doppler effect from its low-Earth-orbiting weather satellites to help pinpoint the location of the signal. This can take a little time depending on where the satellites are located at the time of the incident. While the SARSAT system calculated the location of the signal, a Coast Guard search and rescue controller was on the phone calling to find out if Clements had gone to sea and where he was headed. From this information, a more precise location could be provided to the rescuers.

Given the harrowing weather conditions the night Clements was rescued, Fitzmaurice said it fortuitous that Clements had registered his beacon. The U.S. Coast Guard was able to confirm the validity of Clements’s distress signal. Therefore, the U.S. Coast Guard and U.S. Navy personnel involved in his rescue were not unnecessarily exposed to life-threatening conditions due to a false alert.

"The beacon registration information can help save lives, not only the person in distress, but also the rescuers," said LCDR Kathy Niles, U.S. Coast Guard SARSAT Liaison Officer. "NOAA's database currently contains about 275,000 registrations which, unfortunately, are only about 75 percent of the beacons out there."

Since his rescue on Jan. 2, 2010, Clements has had time to reflect on the technology and people who saved his life. "I'm very glad I had that beacon," he said. "I knew it was a satellite system and somewhere there were people monitoring it, but I didn't know it was a weather satellite. It really is a wonderful system that they have come up with," he said. "It speaks volumes about the United States of America in the things that matter to us as a nation, that we would invest time, resources, and manpower (into technologies) that save people's lives."

Engineers at the NASA Goddard Space Flight Center in Greenbelt, Md., are developing next-generation search and rescue technologies that will more quickly detect and locate distress signals generated by 406 MHz beacons installed on aircraft and vessels or carried by individuals. That's because NASA plans to install the repeaters on Global Position System (GPS), a constellation of 24 spacecraft operating in mid-Earth orbit, and not weather satellites.

"A few years ago, we looked to see how we could improve the system and we concluded that the international search and rescue community would benefit from new technology installed on GPS," said NASA Search and Rescue Mission Manager David Affens. "We would be able to identify distress signals faster and with a greater level of precision. In the end, this will save more lives, reduce risk to rescuers, and save money because less time will be spent searching."

The improved response time is made possible because of the coverage provided by a constellation of satellites encircling the globe. With a mid-Earth orbit search and rescue capability provided by GPS, one emergency signal goes off, and at least four satellites will be in view. Almost instantly, processing of the signal can begin to determine its precise location."

Although the current system is effective, as evidenced by Clements' rescue and those of 27,000 others worldwide since the system became operational in the mid-1980s, a satellite may not be in position to pick up a distress signal the moment a user activates the beacon. Furthermore, weather satellites in geostationary orbit cannot independently locate a beacon unless it contains a navigation receiver that encodes and transmits its position -- a capability not offered on most units. "Right now, it can take an hour or more before we can even act on a signal," Fitzmaurice said.

The new GPS-based system is now being tested. Currently, nine GPS satellites are flying the proof-of-concept technology and an additional 12 are planned. Goddard is conducting testing to fine tune the technology before transitioning to a final system after 2015, which will be deployed on the Air Force’s Block III GPS satellites.

"The bottom-line here is that within one minute, we'll know where the distress signals come from," Fitzmaurice said. "It is the future."