Grow Text SizeShrink Text Size
NASA Has a Crush on You
It's almost one-million pounds of force on the "can," and they want to see it buckle. 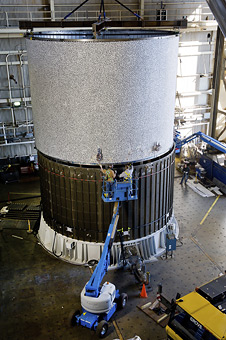 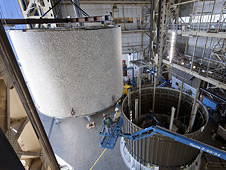 A massive 27.5-foot-diameter (8.4m) and 20-foot-tall (6.1m) fully-instrumented test article was moved into location in Marshall's Engineering Test Laboratory in preparation for the Shell Buckling Knockdown Factor test. The polka dot pattern applied to the barrel allows the engineering team to capture precise measurements of the deformations of the test article during the test using a technique called photogrammetry, the practice of determining the geometric shape of an object from images. Credit: NASA/MSFC

The hope is to use data from the test to generate new "shell-buckling design factors" that will enable lightweight, safe and sturdy "skins" for future launch vehicles. The test is led by the NASA Engineering and Safety Center, or NESC, based at NASA's Langley Research Center in Hampton, Va.

The aerospace industry's shell buckling knockdown factors are a complex set of engineering data that dates back to Apollo-era studies of rocket structures -- well before modern composite materials, manufacturing processes and advanced computer modeling. The hope is for the new test data to update essential calculations that are typically a significant cost, performance, and safety driver in designing large structures like the main fuel tank of a future heavy-lift launch vehicle.

The large-scale test follows a series of smaller scale tests, all aimed at reducing the time and money spent designing and testing future rockets. And by incorporating more modern, lighter high-tech materials into the design and manufacturing process, rockets will save weight and carry more payload.

The 27.5-foot-diameter (8.4m) and 20-foot-tall (6.1m) space shuttle external tank barrel-shaped test article is in place at Marshall's Engineering Test Laboratory. During the test, the section will be sandwiched between two massive loading rings that will press down with almost one-million pounds (453,592 kg) of force on the central cylindrical test article forcing it to buckle.

Leading up to Wednesday's big crush, the shell buckling team has previously tested four, 8-foot-diameter (2.4m) aluminum-lithium cylinders to failure. In preparation for the upcoming test, hundreds of sensors have been placed on the barrel section to measure strain, local deformations and displacement. In addition, advanced optical measurement techniques will be used to monitor tiny deformations over the entire outer surface of the test article. Research to date suggests a potential weight savings of as much as 20 percent.

The principal investigator of the Shell Buckling Knockdown Factor Project is Mark Hilburger, senior research engineer at NASA Langley; Mike Roberts, an engineer in Marshall's Structural Strength Test Branch is the Marshall lead for the test.

The Shell Buckling Knockdown Factor Project is led and funded by the NESC; Marshall is responsible for the test including the engineering, the equipment design, the hardware facilities and safety assurance. Lockheed Martin Space Systems Company fabricated the test article at Marshall's Advance Weld Process Development Facility using state of the art welding and inspection techniques.