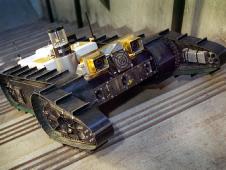 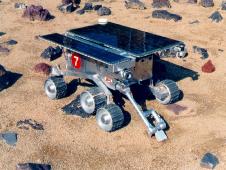 Design techniques honed at NASA's Jet Propulsion Laboratory in Pasadena, Calif., for Mars rovers were used to create the rover currently examining the inside of Japan's nuclear reactors, in areas not yet deemed safe for human crews.

The iRobot PackBot employs technologies used previously in the design of "Rocky-7," which served as a terrestrial test bed at JPL for the current twin Mars rovers, Spirit and Opportunity. PackBot's structural features are modeled after Rocky-7, including the lightweight, high-torque actuators that control the rover; and its strong, lightweight frame structure and sheet-metal chassis.

PackBot's other "ancestor," called Urbie, was an urban reconnaissance robot with military and disaster response applications. Urbie's lightweight structure and rugged features also made it useful in emergency response situations; for example, at sites contaminated with radiation and chemical spills, and at buildings damaged by earthquakes. Urbie's physical structure was designed by iRobot Corp., Bedford, Mass., while JPL was responsible for the intelligent robot's onboard sensors and vision algorithms, which helped the robot factor in obstacles and determine an appropriate driving path. Following the success of Urbie's milestones, the team at iRobot created its successor: PackBot.

Since 2002, iRobot has delivered variations of the PackBot model to the U.S. Army, U.S. Air Force and U.S. Navy. The tactical robot's first military deployment was to Afghanistan in July 2002, to assist soldiers by providing "eyes and ears" in the most dangerous or inaccessible areas. It was also used to search through debris at Ground Zero after the Sept. 11, 2001 attacks in New York.

Recently, iRobot provided two PackBots to help after the devastating March 11, 2011, earthquake and tsunami in Japan. The PackBot models, currently taking radioactivity readings in the damaged Fukushima Daiichi nuclear power plant buildings, are equipped with multiple cameras and hazard material sensors. The images and readings provided by the PackBots indicated radiation levels are still too high to allow human repair crews to safely enter the buildings.

Urbie was a joint effort of the Defense Advanced Research Project's Agency's (DARPA) Tactical Mobile Robot program, JPL, iRobot Corp., the Robotics Institute of Carnegie Mellon University, and the University of Southern California's Robotics Research Laboratory. JPL is managed for NASA by the California Institute of Technology in Pasadena.

For more information on the history of the partnership between iRobot and JPL, visit: http://www.sti.nasa.gov/tto/Spinoff2005/ps_1.html .