Grow Text SizeShrink Text Size
The Puffin: A Passion for Personal Flight
Meet the Puffin. It's an airplane concept conjured up by the mind of aerospace engineer Mark Moore. The unusual looking, vertical take-off and landing tailsitter is only an idea, but you'd never know that from the attention the Puffin has gotten on the Internet. 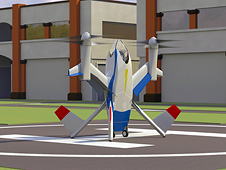 Moore came up with the design for the electric powered, 12-foot (3.7 m) long, 14.5-foot (4.4 m) wingspan personal air vehicle as part of the coursework for his doctoral degree. Then Langley's creativity and innovation and revolutionary technical challenges funds paid for much of the research. How the Puffin rocketed from esoteric erudition to web sensation is a classic case study in the power of the viral nature of the web.

"The animation of the Puffin on YouTube has gotten more 648,000 hits in a week," said Moore. "Until the concept was mentioned in the media Jan. 19, the video had only been clicked on a couple of thousand times since it was uploaded to the NASAPAV channel last November."

It all started with an email from a reporter who was pursuing a story on electric aircraft propulsion for "a couple of websites associated with space.com." As the former manager of the former Vehicle System program's Personal Air Vehicle sector. Moore is a nationally recognized expert on that and other small aircraft systems.

Moore not only shared information about electric motor research for airplanes, but also the Puffin design that he and a team from Massachusetts Institute of Technology, the Georgia Institute of Technology, the National Institute of Aerospace (NIA), and M-DOT Aerospace planned to present to an American Helicopter Society conference on aeromechanics, Jan. 20. Combine NASA cachet with an intriguing technology concept, some compelling animation created by Analytical Mechanics Associates graphic designers and quotable quotes from Moore and the story of the Puffin lifted off.

First it appeared on the Scientific American website from the original interview on electric aircraft propulsion. There Moore was quoted as saying the team named the design the Puffin because, "If you've ever seen a puffin on the ground, it looks very awkward, with wings too small to fly, and that's exactly what our vehicle looks like," Moore says. "But it's also apparently called the most environmentally friendly bird, because it hides its poop. So the vehicle is environmentally friendly because it essentially has no emissions. Also, puffins tend to live in solitude, only ever coming together on land to mate, and ours is a one-person vehicle."

The pictures and video of the Puffin helped attract media attention too. It's not everyday that you see a design that's part plane, part helicopter that stands upright on the ground. Its tail splits into four "legs" that serve as landing gear. It lifts off like a helicopter, hovers and then leans forward to fly horizontally with the pilot lying down like in a hang-glider.

Even the technical details were pretty interesting. If ever built the proposed aircraft would be small and very lightweight -- about 300 pounds (136 kg) empty weight plus another 100 pounds (45 kg) of battery and 200 pounds (91 kg) for the pilot or payload. The design would be powered by a total of 60 horsepower through electric motors, which are designed to be able to fail any two powertrain components on either side and still produce the required power to hover. It has a cruising speed of 150 mph (241 kph), but cruises more efficiently at lower speeds The range with current battery technology would be about 50 miles (80 km). 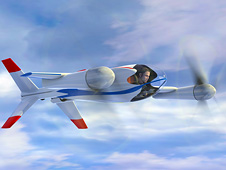 The first web story snowballed until the Puffin garnered worldwide attention, capturing more than 10 news.google.com search pages in less than seven days with stories in media from Japan, Russia, Germany, Hungary, Poland, Italy, Romania, Turkey, Chile, Spain, Guatemala, Greece, Peru, Mexico, Norway, Argentina, Czechoslovakia, China, Korea, and others. A full "Google" search of "NASA Puffin" indicated there were more than 38,000 hits for the combined words. Moore and the NASA Langley News Media Team got inquiries from a New York Times blogger, Germany's biggest Sunday paper, a French men's magazine, ABC News and many more. Even the social media site "Twitter" has been all a-twitter with more than 1,200 tweets about the Puffin in a week.

For Moore the publicity was an added bonus, but it was the way the work was accomplished that really excited him. "I've been doing conceptual design studies for 25 years, and this is the first time that I have performed a six month conceptual design study that involved such detailed analyses performed right from the onset (that is viscous full Navier Stokes Overflow aero solutions feeding WopWop aeroacoustic analysis, along with MBDyn rotor dynamics, with detailed transition trajectory analysis)," said Moore. "So I think it is a poster child of higher-order methods being able to push themselves far forward to the front stages of design -- to avoid the nasty 'real world' surprises that higher-order analysis can bring at later stages. Getting systems analysis to work in closer collaboration with discipline experts is greatly needed as we progress towards greater multi-disciplinary coupling to solve highly complex problems."

The other thing the engineer says he looks forward to is sharing the technical results of the studies and "the depth of analysis that exists" with other researchers. He'd much rather do that, Moore says, than talk to reporters.

As for the Puffin media frenzy -- it's subsided some, but could start back up later this year when the NIA hopes to fly a remote control one-third size model to validate assumptions made in academic studies, with the specific intent of exploring the transition from hover to forward flight.