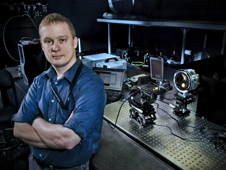 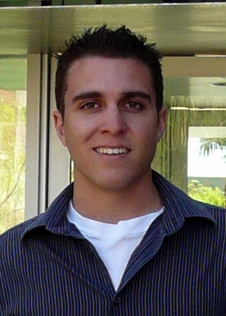 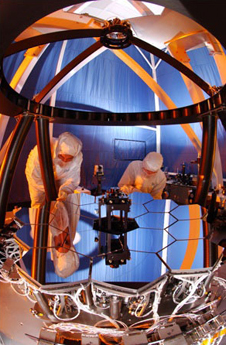 Engineers at Ball Aerospace test the Wavefront Sensing and Control testbed to ensure that the 18 primary mirror segments and one secondary mirror on JWST work as one. The test is performed on a 1/6 scale model of the JWST mirrors. Credit: NASA/Northrop Grumman/Ball Aerospace
› Larger image Deep inside Building 5 at NASA's Goddard Space Flight Center in Greenbelt, Md., graduate students are on the front lines of technology development adjusting lasers and mirrors and spending long hours at a computer terminals. University partnerships are playing key roles in developing new and innovative technologies for NASA missions while creating a pathway for future NASA scientists and engineers.

"Investments in students today help us build what comes after the Webb telescope," said Lee Feinberg, Webb telescope Optical Telescope Element Manager at NASA Goddard. "University professors serve on our advisory boards. It allows us to tap the brightest minds in the country."

Past experience bears out Feinberg's observations.

Six years ago, Matthew Bolcar was a graduate student from the University of Rochester, N.Y. when he started working at NASA Goddard. He has been exploring interesting problems and developing risk-reduction techniques related to aligning segmented mirrors on the Webb telescope.

The Webb telescope primary mirror is composed of 18 segments that will unfold to create a single 6.5-meter (21-foot) mirror system once the observatory reaches orbit and begins operations. To work properly, the mirrors must be perfectly aligned. "If there were a problem, the telescope's operators could adjust the mirrors from the ground to correct for any possible misalignments," said Bruce Dean, group leader of the Wavefront Sensing and Control (WFSC) group at NASA Goddard.

Dean's group was charged with developing the software to compute the optimum position of each of the 18 mirrors, and then adjusting and aligning them, if necessary. The work was funded by the Webb telescope technology development program and was patented by Goddard in 2009. Goddard worked together with Ball Aerospace & Technologies Corp. in 2005, to develop this flight software for the Webb Space Telescope.

In 2006-2007, a team of engineers from both Goddard and Ball Aerospace & Technologies Corp., successfully tested the WFSC algorithms on a laboratory model of the Webb Telescope, proving they are ready to work in space.

Today, Bolcar is a full-time optical engineer for the Goddard WFSC group. Currently, he is working on the Thermal InfraRed Sensor (TIRS) instrument that will fly on the Landsat Data Continuity Mission (LDCM), the next in a series of satellites that have remotely sensed Earth’s continental surfaces for more than 30 years. He's also working on an experimental instrument, called the Visible Nulling Coronagraph (VNC) that would be used for exoplanet detection.

The graduate fellowship and co-op programs give NASA time to train students for optical engineering. "It takes four to five years to really train someone in wavefront-sensing technology," Dean added.

University partnerships are a great way to get young engineers and scientists interested in NASA, Bolcar agreed. "When you're a graduate student, wherever the funding is, you are going to develop partnerships and relationships," he added. "There is a potential to go beyond graduate school. It's good for the university and its good for attracting young talent to NASA."

Alex Maldonado, a University of Arizona graduate student in optical engineering, is following in Bolcar's footsteps. He spends half his time working at Goddard as a co-op student and the other half taking classes at the university in Tucson, Ariz. When at Goddard, he researches new techniques for polishing optical lenses to prevent light scattering.

Astronomers need bigger and smoother mirrors that will collect more light to allow scientists to see faint objects farther into the distant universe. A common and effective technique for shaping optical lenses is called diamond-turning, where a diamond tip cuts away the lens material. However, this technique also introduces flaws that can deflect light. Maldonado spends much of his time designing and executing testing procedures to see if new polishing techniques reduce this effect -- efforts that will be applied to the Near Infrared Camera (NIRCam), a Webb telescope imager.

The University of Arizona is providing the Near Infrared Camera (NIRCam) to the Webb Space Telescope, an imager with a large field of view and high angular resolution. Prof. Marcia Rieke at the University is the lead for that instrument.

"In addition to the students, we work with the professors," according to Dean. Bolcar's graduate professor, James R. Fienup, is a world-renowned expert in optics. "We asked him to help us cover high-risk areas on the Webb telescope," said Dean.

"This is a win-win for the schools and NASA," said Feinberg. "We fund their graduate students, and in return, we get really bright, fresh minds working on NASA's most challenging missions.