Grow Text SizeShrink Text Size
Ah, That New Car Smell: NASA Technology Protects Spacecraft from Outgassed Molecular Contaminants
Outgassing — the physical process that creates that oh-so-alluring new car smell — isn’t healthy for humans and, as it turns out, not particularly wholesome for sensitive satellite instruments, either. But a team of NASA engineers has created a new way to protect those instruments from its ill effects. 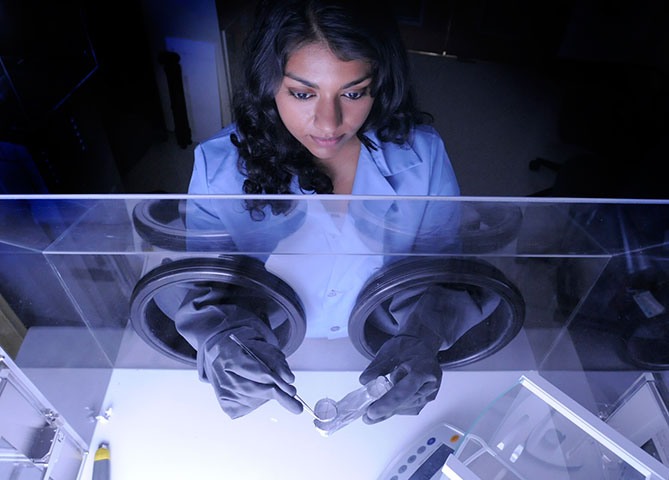 › Larger image
Goddard technologist Nithin Abraham, a member of the team that has developed a low-cost, low-mass technique for protecting sensitive spacecraft components from outgassed contaminants, studies a paint sample in her laboratory. Credit: NASA/Pat Izzo

For some people, the best part about buying a new car is its factory-fresh new car smell, a distinctive aroma created when the chemicals and residual solvents used to manufacture dashboards, car seats, carpeting and other vehicle appointments outgas and fill the cabin. While the scent may be alluring to some, many researchers believe exposure to these gases isn’t particularly healthy — so unhealthy, in fact, that some recommend that drivers keep their new cars ventilated while driving.

Outgassed solvents, epoxies, lubricants, and other materials aren’t especially wholesome for contamination-sensitive telescope mirrors, thermal-control units, high-voltage electronic boxes, cryogenic instruments, detectors and solar arrays, either. As a result, NASA engineers are always looking for new techniques to prevent these gases from adhering to instrument and spacecraft surfaces and potentially shortening their lives.

A group of technologists has created a low-cost, easy-to-apply solution, which is more effective than current techniques.

Led by Principal Investigator Sharon Straka, an engineer at NASA's Goddard Space Flight Center in Greenbelt, Md., the team has created a new, patent-pending sprayable paint that adsorbs these gaseous molecules and stops them from affixing to instrument components. Made of zeolite, a mineral widely used in industry for water purification and other uses, and a colloidal silica binder that acts as the glue holding the coating together, the new molecular adsorber is highly permeable and porous — attributes that trap the outgassed contaminants. Because it doesn’t contain volatile organics, the material itself doesn’t cause additional outgassing.

“It looks promising,” Straka said. “It collects significantly more contaminants than other approaches.” 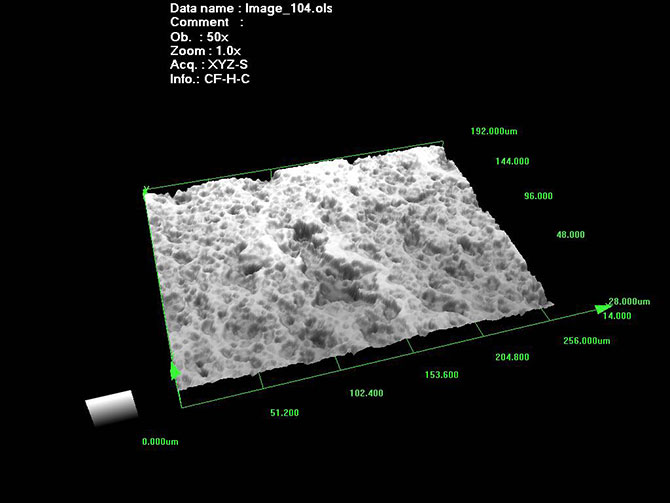 › Larger image
This is a close-up view of the highly porous, sprayable coating that Goddard technologists created to attract and then trap outgassed contaminants that harm spacecraft components. Credit: NASA

The new paint, however, overcomes these limitations by providing a low-mass alternative. Because technicians can spray the paint directly onto surfaces, no extra mounting equipment is necessary. In addition, technicians can coat adhesive strips or tape and then place these pieces in strategic locations within an instrument, spacecraft cavity, or vacuum system, further simplifying adsorber design. “This is an easy technology to insert at a relatively low risk and cost,” Hasegawa said “The benefits are significant.”

Since its development, Northrop Grumman, Redondo Beach, Calif.; the European Space Agency; the Laboratory for Atmospheric and Space Physics at the University of Colorado at Boulder; and Spica Technologies of Hollis, N.H., have expressed interest in using the material, Straka said. In addition, NASA’s ICESat2 ATLAS project is evaluating its use, pending the outcome of additional tests, she said.

The team plans to tweak its recipe to enhance the paint’s performance and experiment with different pigments, mainly black, to create a coating to absorb stray light that can overcome the light scientists actually want to gather. Straka also believes the technology could be used on the International Space Station or future space habitats to trap pollutants and odors in crew quarters.

“We’re ready for primetime,” Straka said. “The coating is undergoing qualification tests and is ready for infusion into flight projects or ground vacuum systems.”