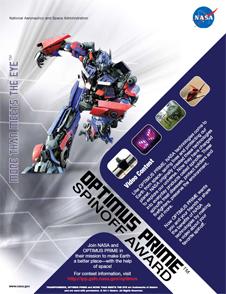 NASA's OPTIMUS PRIME video contest poster. Credit: NASA
OPTIMUS PRIME is a trademark of Hasbro and is used with permission. © 2011 Hasbro. All Rights Reserved.
› View Poster (pdf) NASA is kicking off its second annual NASA OPTIMUS PRIME Spinoff Video Contest to raise student awareness of how NASA technologies provide benefits to the public. Registration for the contest is open until January 3, 2012.

The NASA OPTIMUS PRIME Spinoff Video Contest emphasizes the similarities between the popular OPTIMUS PRIME character from Hasbro's TRANSFORMERS brand and NASA technologies now being used back on Earth.

"The level of skill, effort and comprehension demonstrated by last year’s contestants was truly amazing," said Nona Cheeks, head of the Goddard Space Flight Center's Innovative Partnerships Office, which administers the contest for the Agency. "However, this year we are opening the contest up to include high school students, and we fully expect the videos sent in by that group to take the contest to a whole new level." Additional changes for the 2011 contest include transitioning the awards ceremony to the Kennedy Space Center in Florida and some exciting new prizes to be announced in December.

Submissions to the OPTIMUS PRIME Spinoff Video Contest will consist of three-minute videos that demonstrate understanding of the NASA technology and mission need, as well as the commercial application and public benefit. Submitted videos will be posted online, where the public will be encouraged to vote for their favorite in the first round of judging.

The top five submissions from each of the three grade categories (third–fifth, sixth–eighth and ninth– twelfth) will advance to a final judging round. A NASA panel of judges will select the winning entry in each category. The winning students, along with the associated NASA innovators and their commercial partners, will receive an OPTIMUS PRIME Spinoff Award trophy at the awards ceremony in April 2012.

For more information, and to register for the contest, please visit the NASA OPTIMUS PRIME Spinoff Video Contest Web site at:

TRANSFORMERS and OPTIMUS PRIME are trademarks of Hasbro and are used with permission. © 2011 Hasbro. All Rights Reserved.