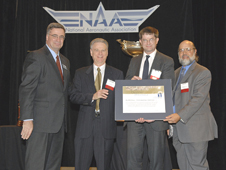 An NAA official, left, presents the FAI Honorary Group Diploma to OMNI team members at an award ceremony in October 2007. Credit: FAI/NAA > Larger image A NASA team has shown how Internet technologies used every day that enable computers to talk to each other can make it possible for satellites to communicate the same way.

The engineers working on the Operating Missions as Nodes on the Internet (OMNI) project, based out of NASA's Goddard Space Flight Center in Greenbelt, Md., have been working since 1998 to demonstrate ways for space missions to use standard Internet protocols.

Typically, engineers and technicians communicate with orbiting scientific spacecraft through a closed, point-to-point system. Scientific satellites have a degree of autonomy, but generally a specially equipped control center directs their data collection activities.

"But imagine if the spacecraft were 'network-enabled,'" says Jim Rash, who has been OMNI's project manager since the project started. "They can be designed to talk to each other, share data and alert each other to things that they have noticed from their own sensors."

These nodes would be able to act and react faster and more efficiently if they were networked together. And giving spacecraft the ability to communicate with Internet protocols is not a big problem using off-the-shelf technologies, as demonstrated by the OMNI project over the past few years.

Some future NASA missions may involve space systems communicating with each other just like they would on the Internet, says Keith Hogie, lead engineer on the OMNI Project.

For these reasons, NASA is looking at putting the OMNI team's work to use on future missions to the moon and Mars in the years to come.

"We're going to have many nodes on the surfaces of the Moon and Mars, and those nodes will be everything from humans on foot in suits walking around poking at rocks, to science instruments and platforms, habitats, rovers, even relay satellites," Rash says.

Enabling those instruments, rovers, suits and satellites with the capability to communicate using Internet protocols is one way to give the equipment and the astronauts the autonomy and independence needed to operate efficiently.

Rash is quick to emphasize that, though the OMNI team has demonstrated ways for space missions to communicate just like computers over the Internet, the spacecraft themselves are not accessible to everybody with a PC and a network card.

"We're not really talking about making NASA missions part of the open Internet," Rash says. "NASA has an isolated second Internet in some sense. There's a brick wall between them, and that's one of the ways we maintain security."

Though there is a literal barrier between NASA's network and the open Internet, the technologies are the same, he says.

NASA is not alone in recognizing OMNI's importance to the future of space exploration. For the team's pioneering work, France-based Fédération Aéronautique Internationale (FAI) and its U.S. member, the National Aeronautic Association, presented the OMNI group with the FAI Honorary Group Diploma at the end of October 2007.

"We've had other awards, but this is a pretty special award," Rash says. "To be recognized internationally like that is very satisfying." Rash explains that FAI awarded the certificate for OMNI's successful tests on the UoSAT-12 satellite and the CANDOS experiment on shuttle flight STS-107, along with the use of OMNI concepts on more than a dozen international spacecraft from seven different countries.

"We had an opportunity in 1999 to begin using the UoSAT-12, a British spacecraft already in orbit that happened to have the right kind of hardware," says Rash. "The first crucial test was to ping the spacecraft, using just a regular ping command." "Ping" is a common network tool used to verify another computer exists on the Internet.

"We issued the ping command. It went flying over the Internet and across the Atlantic to the ground station in England where UoSAT-12 was controlled, and then to the spacecraft," Rash says. "The spacecraft computer responded to the ping with return packets, which we received here at Goddard."

"That was one really exciting moment," he says. "The first time in history that a spacecraft had been pinged through the Internet with completely Internet-standard technologies. That was the first demonstration that began establishing that this was a feasible approach for space data communications."

That initial ping was only the beginning. The OMNI team was able to transfer files to and from the satellite, and they were even able to use a browser to bring up a Web page hosted on the satellite that showed, in real time, the data it was collecting. Ultimately, many other science mission operations scenarios were also demonstrated.

Following success with UoSAT-12, Rash and his team helped develop and experiment with the Communication and Navigation Demonstration on Shuttle (CANDOS). CANDOS was an independent experiment bolted into space shuttle Columbia's cargo bay on mission STS-107. CANDOS had its own communications system that flowed Internet protocol packets to and from the control center at Goddard.

CANDOS had the advantage of being connected both with ground stations and with NASA's Tracking and Data Relay Satellite System, which meant that the OMNI team could interact with CANDOS for longer periods of time than was possible with UoSAT-12. Various advanced mission scenarios were accomplished with CANDOS, including activating a remote emergency control center via these secure Internet communications.

The excellent results of work with UoSAT-12 and CANDOS have the entire OMNI team excited for the jobs they have ahead of them.

"This is a mission-enabling kind of technology," Rash says. "It enables new kinds of missions that we could not do in any cost-effective way without it." Even though progress has been swift, "We've been demonstrating this for nine years. ... We are not done with our work yet, I think. We still have work to do."