Grow Text SizeShrink Text Size
Blacker Than Black
Black is black, right? Not so, according to a team of NASA engineers now developing a blacker-than pitch material that will help scientists gather hard-to-obtain scientific measurements or observe currently unseen astronomical objects, like Earth-sized planets in orbit around other stars.

The nanotech-based material now being developed by a team of 10 technologists at the NASA Goddard Space Flight Center in Greenbelt, Md., is a thin coating of multi-walled carbon nanotubes — tiny hollow tubes made of pure carbon about 10,000 times thinner than a strand of human hair. Nanotubes have a multitude of potential uses, particularly in electronics and advanced materials due to their unique electrical properties and extraordinary strength. But in this application, NASA is interested in using the technology to help suppress errant light that has a funny way of ricocheting off instrument components and contaminating measurements.

"This is a technology that offers a lot of payback," said engineer Leroy Sparr, who is assessing its effectiveness on the Ocean Radiometer for Carbon Assessment (ORCA), a next-generation instrument that is designed to measure marine photosynthesis. "It's about 10 times better than black paint" typically used by NASA instrument designers to suppress stray light, he said.

The technology works because of its super-absorption abilities. The nanotubes themselves are packed vertically much like a shag rug. The tiny gaps between the tubes absorb 99.5 percent of the light that hits them. In other words, very few photons are reflected off the carbon-nanotube coating, which means that stray light cannot reflect off surfaces and interfere with the light that scientists actually want to measure. The human eye sees the material as black because only a small fraction of light reflects off the material. 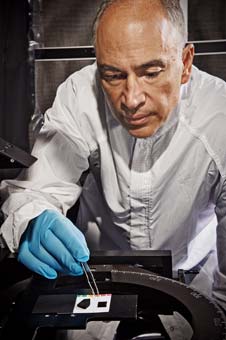 › View larger image
Principal Investigator John Hagopian developed a new nanotech-based material that is 10 times more effective than black paint used by instrument developers to absorb stray light, which can contaminate scientific data. The sample on the left is black paint typically used to suppress errant light in instruments; the sample on the right is the new nanotube material. Credit: Chris Gunn/NASA 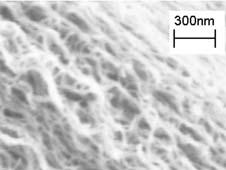 › View larger image
Multi-walled carbon nanotubes are tiny hollow tubes made of pure carbon about 10,000 times thinner than a strand of human hair. NASA is investigating their use to help suppress errant light that ricochets off instrument components and contaminates measurements. Credit: NASA The team began working on the technology in 2007. Unbeknownst to the group, the New York-based Rensselaer Polytechnic Institute also had initiated a similar effort and announced in 2008 that its researchers had developed the darkest carbon nanotube-based material ever made — more than three times darker than the previous record. "Our material isn't quite as dark as theirs," said John Hagopian, the principal investigator leading the development team. "But what we're developing is 10 times blacker than current NASA paints that suppress system stray light. Furthermore, it will be robust for space applications," he said.

That is an important distinction, said Carl Stahle, assistant chief of technology for Goddard's Instrument Systems and Technology Division. Not all technology can be used in space because of the harsh environmental conditions encountered there. "That's the real strength of this effort," Stahle said. "The group is finding ways to apply new technology and fly it on our instruments."

The breakthrough was the discovery of a highly adhesive underlayer material upon which to grow the carbon nanotubes, which are just a few tens of nanometers in diameter. To grow carbon nanotubes, materials scientists typically apply a catalyst layer of iron to an underlayer on the silicon substrate. They then heat the material in an oven to about 750° C (1,382° F). While heating, the material is bathed in carbon-containing feedstock gas.

Stephanie Getty, the materials scientist on Hagopian's team, varied the underlayer as well as the thickness of the catalyst materials to create carbon nanotubes that not only absorb light, but also remain fixed to the material upon which they are grown. As a result, they are more durable and less likely to scratch off. The team also has grown durable nanotube coatings on titanium, a better structural material for space use. The team now is fine-tuning production techniques to assure consistent quality and light-suppression capabilities, Hagopian said.

Should the team prove the material's suitability in space, the material would provide real benefits to instrument developers, Hagopian added.

Currently, instrument developers apply black paint to baffles and other components to reduce stray light. Because reflectance tests have shown the coating to be more effective than paint, instrument developers could grow the carbon nanotubes on the components themselves, thereby simplifying instrument designs because fewer baffles would be required. To accommodate larger components, the team now is installing a six-inch furnace to grow nanotubes on components measuring up to five inches in diameter. And under a NASA R&D award, the team also is developing a separate technique to create sheets of nanotubes that could be applied to larger, non-conforming surfaces.

In addition to simplifying instrument design, the technology would allow scientists to gather hard-to-obtain measurements because of limitations in existing light-suppression techniques or to gather information about objects in high-contrast areas, including planets in orbit around other stars, Hagopian said.

The ORCA team, which is fabricating and aligning an instrument prototype, is the first to actually apply and test the technology. The instrument is the front-runner for the proposed Aerosol/Cloud/Ecosystems (ACE) mission and requires robust light-suppression technologies because more than 90 percent of the light gathered by the instrument comes from the atmosphere. Therefore, the team is looking for a technique to suppress the light so that it doesn't contaminate the faint signal the team needs to retrieve.

"It's been an issue with all the (ocean sensors) we've flown so far," said ORCA Principal Investigator Chuck McClain.

Working with the ORCA team, Hagopian's group grew the coating on a slit, the conduit through which all light will pass on ORCA. "Having an efficient absorber is critical and the nanotubes could provide the solution," McClain said. "Right now, it looks promising," Sparr added. "If I can support them and they can continue advancing the technology so that it can be applied to other spacecraft components, it could be a very important development for NASA."

Goddard Chief Technologist Peter Hughes agrees, and, in fact, selected Hagopian and his team to receive his organization’s 2010 "Innovator of the Year" award. "Our job is to develop and advance new technology that will ultimately result in better scientific measurements. Goddard has a well-deserved reputation for creating technologies that enhance instrument performance because we are adept at quickly infusing emerging technology for specific spaceflight applications. John’s team demonstrated that key strength. And in doing so, he’s leading the way in NASA’s quest to bring about a new level of scientific discovery," Hughes said.