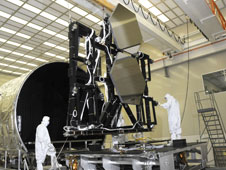 "We’re excited that we can support the James Webb Space Telescope with our world class cryogenic and x-ray telescope test facility," said Helen Cole, project manager for the Webb Telescope activities at NASA's Marshall Space Flight Center, Huntsville, Ala. "The test performed here are crucial to the success of the program since they’ll ensure the mirrors and components will be able to withstand the extreme cold temperatures of space."

The mirror segment is the first of 18 flight mirror segments that will be joined to make a giant, 6.5-meter diameter (21.3 ft.) hexagonal mirror. The segments will be subject to temperatures of -414 degrees Fahrenheit in a 7,600 cubic-foot helium-cooled vacuum chamber at NASA Marshall.

Engineers will measure how the mirror changes shape going from room temperature to cryogenic (frigid) temperatures, as the metal expands and contracts. They can model these changes to some extent, but not perfectly. The mirrors will be polished to about 100 nanometers (a human hair is approximately 60,000 to 120,000 nanometers) accuracy at room temperature, based on the expected changes. Then it will be cooled down to cryogenic temperatures and engineers will measure the mirror's surface, creating a "hit map" of unexpected changes. 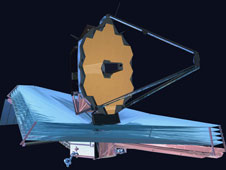 > High resolution image
Artist's rendition of the James Webb Space Telescope in orbit. Credit: NASA "This is what we have done so far with the first flight mirror segment," said Jonathan Gardner, Webb Telescope Deputy Project Scientist at NASA Goddard Space Flight Center, Greenbelt, Md. "Now, engineers will warm it up and polish out the "hit map" areas to get the mirror to 20 nanometer accuracy - a process which will take months. The mirrors will then be brought back down to cryogenic temperatures to verify the increased accuracy." In addition to this testing, engineers also did some "cryo cycling." That means going up and down in temperature (without polishing in between) to test the repeatability of the changes.

Since there are 18 mirror segments, each measuring about 1.5 meters (4.9 ft.) in diameter, they will be tested in batches of six and chilled to cryogenic temperatures four times in a six-week time span. It takes approximately five days to cool a mirror segment to cryogenic temperatures. All flight mirror tests are expected to be completed in June 2011. The Webb telescope is scheduled for launch in 2013.

Northrop Grumman is the prime contractor for the Webb telescope, leading a design and development team under contract to NASA’s Goddard Space Flight Center.

"It has taken years of intense effort for the Webb Telescope team to begin flight mirror cryotesting and we’re gratified that testing was successful," said Martin Mohan, Webb telescope program manager for Northrop Grumman’s Aerospace Systems sector, Redondo Beach, Calif. "Along the way, we’ve had to invent entire manufacturing and measurement processes because no one has ever built a telescope this large that has to operate at temperatures this extreme."

Dr. Scott Texter talked about the challenges involved in cryogenic testing of the James Webb Space Telescope (Webb) mirror segments. Texter is the Webb Telescope Manager at Northrop Grumman and is responsible for all aspects of the design, fabrication, and testing of the telescope element of the overall observatory. Here is the first in an series of audio podcasts about technology developments and accomplishments at Northrop Grumman Aerospace Systems.> Listen to the podcast (10:55)