Grow Text SizeShrink Text Size
NuSTAR's Mirrors Baked in Zhang's Glass Kitchen
It pays to persevere. No one knows this better than Will Zhang.

The fruits of that labor -- a total of 9,000 individual mirror segments -- are now assembled into telescope optics and installed inside NASA's Nuclear Spectroscopic Telescope Array (NuSTAR), a small Explorer mission managed by the Jet Propulsion Laboratory in Pasadena, Calif. The agency plans to launch NuSTAR on March 21, 2012 from Kwajalein Atoll in the Marshall Islands aboard a Pegasus rocket attached to the underside of the L-1011 Stargazer aircraft. 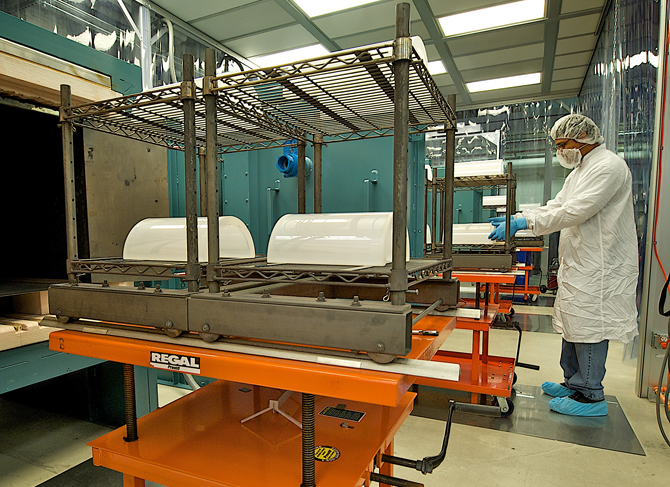 NASA's latest X-ray space telescope, which will detect X-rays from objects ranging from our sun to monstrous black holes billions of light-years away, is unique in that it will be the first orbiting telescope to focus X-rays in the high-energy range, creating the most detailed images ever taken in this slice of the electromagnetic spectrum.

One of NuSTAR's Enabling Technologies

Zhang's mirror segments are one of the advanced technologies that contributed to NuSTAR's development. The mirrors, combined with specialized coatings developed and applied by the Danish Technical University in Copenhagen and a mounting technique developed by Columbia University in New York City, enabled NuSTAR's optics.

The challenge for the observatory's developers was developing an optics system small enough to be housed in a small spacecraft yet provide unprecedented sensitivity and resolution. Measuring only 200 microns thick or 100 times thinner than Chandra's much heavier mirrors, Zhang's mirror segments, coupled with the other technologies, fit the bill.

"It sometimes takes a decade to bring an idea to the point where you have something to show," Zhang said, reflecting on the 14-year effort that started in 1998 when he first conceived a new way to manufacture lightweight, higher-resolution mirrors ideal for small missions, like NuSTAR. "We were fortunate. NASA provided my team with research and development funding, which helped us to advance the technology."

X-ray mirrors must be curved and nested inside an optical assembly so that the highly energetic X-ray photons graze their surface, instead of passing through them — much like a stone skimming the surface of a pond. To make these curved segments, Zhang used flat sheets of smooth, commercially available lightweight glass similar to those used in laptop screens.

The flat sheets of glass, which are about the thickness of three sheets of paper, were placed atop a mandrel or rounded mold that provided the appropriate geometry for mounting in NuSTAR's optic unit. Technicians then placed the mandrel inside an oven that heated the glass to about 1,100 degrees Fahrenheit. As the glass heated, it softened and folded over the mandrel to produce a curved mirror that was the accurate copy of the mandrel's surface.

"Zhang's technique for forming the thin glass improved the efficiency of producing high-quality segments significantly over what had been done by others, enabling the NuSTAR optics to be built during NuSTAR's rapid development period," said Fiona Harrison, the mission’s principal investigator at the California Institute of Technology in Pasadena, Calif.

At the height of production, Zhang's laboratory included 10 large ovens that produced the 9,000 individual segments. The secret in Zhang's "glass kitchen" was a release layer that prevented the glass from sticking. "This proprietary preparation technique preserved the mirror's surface quality, allowing a nearly 100-percent yield," Zhang said.

The team shipped the baked glass segments to the Danish Technical University where university scientists used a specialized vacuum deposition chamber to apply several hundred alternating layers of either silicon and tungsten, or platinum and carbon, to maximize X-ray reflectance. These thin layers each measured just a few atoms thick.

The Danish Technical University sent the coated mirrors to Columbia University, which used a novel machining and assembly process that it developed to align and assemble the 9,000 mirrors into concentric shells to form an optical assembly that, as an integrated unit, can focus X-rays. The completed optics were then integrated with a folded mast built by ATK-Goleta in Goleta, Calif. Stowed inside the NuSTAR spacecraft, the mast will unfold to a length of 33 feet (10 meters) a week after the spacecraft reaches its orbit to begin the two-year observing mission.

Together, these advances in technology will enable NuSTAR to explore the cosmic world of high-energy X-rays with much improved sensitivity and resolution over previous missions. Outside our galaxy, it will see some of the most powerful black holes and cosmic events known. Data from the mission will provide a better understanding of the extreme physics behind jets that travel nearly at the speed of light, exploding stars and more.

Closer to home, NuSTAR will probe the sun, looking for microflares on the surface that could explain how its million-degree solar corona, or atmosphere, is heated. It will even test a theory of dark matter, the mysterious substance making up about one-quarter of our universe, by searching the sun for evidence of a hypothesized dark matter particle.

"This is a revolutionary mission," Zhang said. "We're so glad we were able to advance our technology to the point where it was ready for NuSTAR. Precision slumping of thin glass sheets has shown to be an excellent way of making lightweight, higher-resolution x-ray optics, as evidenced by the delivery of our mirrors."

For more information about the NuSTAR mission, visit: