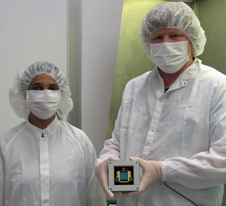 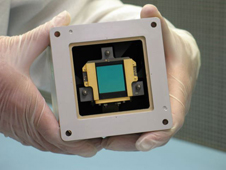 This model of the MIRI detector (in green) is similar to the charge-coupled devices in digital cameras. It's housed in the brick-like unit called a focal plane module. Credit: NASA
› Larger image 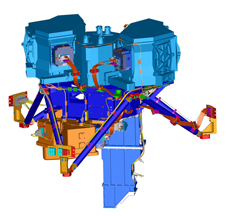 Artist's conception of the Mid-Infrared Instrument (MIRI). MIRI is an imager/spectrograph that covers the wavelength range of 5 to 27 micrometers, with a possible spectrographic coverage up to 29 micrometers. Credit: NASA
› Larger image A major instrument due to fly aboard NASA's James Webb Space Telescope is getting its first taste of space in the test facilities at the Rutherford Appleton Laboratory (RAL) in the United Kingdom. The Mid-InfraRed Instrument (MIRI) has been designed to contribute to areas of investigation as diverse as the first light in the early Universe and the formation of planets around other stars.

"The start of space simulation testing of the MIRI is the last major engineering activity needed to enable its delivery to NASA. It represents the culmination of 8 years of work by the MIRI consortium, and is a major progress milestone for the Webb telescope project," said Matt Greenhouse, NASA Project Scientist for the Webb telescope Integrated Science Instrument Module, at NASA's Goddard Space Flight Center, Greenbelt, Md.

The James Webb Space Telescope represents the next generation of space telescope and, unlike its predecessor Hubble, it will have to journey far from home. Its ultimate destination is L2, a gravitational pivot point located 1.5 million kilometers (930,000 miles) away, on the opposite side of the Earth from the Sun. Here it is cool enough for the MIRI to obtain exquisite measurements that astronomers will use to help decipher the Universe. "At L2 we are at an environmentally stable point where we can be permanently shaded from light from the Sun and Earth. That allows us to reach the very low temperatures - as low as 7K (- 447.1 Fahrenheit) in the case of MIRI – that are necessary to measure in the mid-infrared," says Jose Lorenzo Alvarez, MIRI Instrument Manager for European Space Agency (ESA).

The MIRI provides imaging, coronagraphy and integral field spectroscopy over the 5-28 micron wavelength range. It is being developed as a partnership between Europe and the U.S. The MIRI is one of four instruments flying aboard the Webb telescope. The other instruments include: NIRSpec (a near-infrared spectrograph), NIRCam (a near-infrared camera), and TFI (a tunable filter imager).

One of the jewels in the MIRI's crown is the potential to observe star formation that has been triggered by an interaction between galaxies. This phenomena has been difficult to study with Hubble or ground-based telescopes since the optical and near-infrared light from these newly formed stars is hidden from view by clouds of dust that typically surround newly formed stars This will not be a problem for MIRI, as it is sensitive to longer wavelengths of light in the range 5 to 28 microns, which can penetrate the dust.

However, keeping the MIRI at a colder temperature than on Pluto, for a sustained period of time, was one of the biggest engineering challenges facing those charged with constructing the instrument. "A critical aspect, to achieving the right sensitivity, is to ensure stable operation at 7 Kelvin (- 447.1 Fahrenheit) that will last for the five years of the mission," explains Alvarez.

This past spring, the flight model of the MIRI began to take shape as the key sub-assemblies - the imager, the spectrometer optics, and the input-optics and calibration module - were delivered to RAL for integration. Each of the optical sub-assemblies of the MIRI had at that stage already, separately, undergone exhaustive mechanical and thermal testing to make sure they can not only survive the rigors of a journey to L2, but also remain operational for the life of the mission. At RAL, the sub-assemblies were integrated into the flight model and are now being tested again, as a complete instrument, using a specially designed chamber developed at RAL to reproduce the environment at L2.

For the purposes of these environmental and calibration tests the Webb telescope optics are simulated using the MIRI Telescope Simulator (MTS) that was built in Spain. Following completion of these tests, the MIRI will be shipped to NASA's Goddard Space Flight Center in Greenbelt, Md., U.S. next spring, when the instrument will be integrated with the Webb’s Integrated Science Instrument Module.

When the MIRI eventually reaches its sheltered position, located four times further away from the Earth than the Moon, scientists can begin probing the Universe's secrets, including its earliest days. "We'd like to try and identify very young galaxies, containing some of the first stars that formed in the Universe," says Gillian Wright, European Principal Investigator for MIRI based at the U.K. Astronomy Technology Centre, Edinburgh, U.K.

With the current generation of space telescopes, distinguishing between a galaxy mature enough to have a central black hole and a young galaxy at a high redshift is troublesome, as they appeared similar in the near-infrared. A key to the MIRI's potential success is its ability to see through cosmic dust. When stars form they burn through the elements, creating dust which ends up in the interstellar medium of the galaxy. The re-radiated emission from this dust creates a spectrum markedly different from that of a galaxy with no dust; the emission is expected to be 5-10 times stronger in the mature galaxy. "MIRI provides a diagnostic of whether there has been a previous generation of stars that had gone supernova and created dust. In the first generation of stars there would be no dust or black holes because there hadn't been time to make any," explains Wright.

The astronomers who will use the MIRI and the James Webb Space Telescope are also particularly keen to explore the formation of planets around distant stars, another area where the ability to peer through the dust becomes important. "MIRI is absolutely essential for understanding planet formation because we know that it occurs in regions which are deeply embedded in dust," said Wright. MIRI's beam width of 0.1 arc seconds allows the instrument to image 30-35 Astronomical Units (AU) of a proto-planetary disc.

With most such discs thought to be hundreds of AU across, the MIRI can build up highly resolved mosaics of these planetary nurseries in unprecedented detail. With its spectrometer, the MIRI could even reveal the existence of water and/or hydrocarbons within the debris, paving the way for investigations into the habitability of other planetary systems.

The James Webb Space Telescope is a joint project of NASA, ESA and the Canadian Space Agency.