Grow Text SizeShrink Text Size
'Mindshift' Biofeedback Gaming Technology
The gamer's quest is for reality, but there are limits when an animated, armored man is shooting at a banshee flying at him at simulated warp speed on a video screen; or a caricature of an athlete is trying to hit a light that represents a ball that can curve in ways that defy physics.

This is the world in which NASA's Langley Research Center scientists Alan Pope and Chad Stephens worked with Langley Volunteer Service Program high school intern Nina Blanson until she decamped to become a freshman at Yale.

They have invented technology to inject stress levels into the games' controls so that the nervous or stressed shooter is aiming a moving gun at a moving target. The technology has a long, somewhat descriptive, acronym-defying name, but the inventors are just calling it "Mindshift" and are inviting representatives of the gaming industry to a demonstration on September 22 in Raleigh, N.C.

It includes a sensor attached to the player's earlobe, checking the pulse and wired into the control. Or sensors attached to the forehead, seeking the facial muscle strain that is a sign of stress.

To find out more about the demonstration, please e-mail: brentfagg@rpi.org

Or even sensors attached to the player's partner to inject a social variable into game play, requiring teamwork between the two players. At issue is understanding that video games are with us, so why not involve them in the monitoring and treatment of stress?

"You don't have to do everything in a disciplined way," said Pope, whose field of expertise is engineering psychophysiology and biomedical feedback. "You can also do it recreationally.

"There are some people who claim that playing video games contributes to attention deficit, that it rewires our brains. Well, if that's the case then let's decide how we want video games rewiring our brain."

It's a project that yielded its first product in the early 1990s, when NASA research intended for pilots and air traffic controllers was licensed to SmartBrain Technologies, which used it in working with children afflicted with Attention Deficit/Hyperactivity Disorder. Pope had developed closed-loop technology to interject brainwave indicators of boredom into a flight simulator's control so that the degree of automation –- such as an autopilot –- was diminished when attention waned. The pilot was re-engaged by a less-automated airplane. 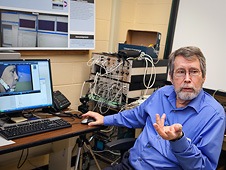 "We reset the paradigm to close the loop with psycho-physiological information," Pope said. "It wasn't just hand-eye coordination anymore."

Fast forward a generation -- and perhaps more than a dozen video game generations, if Moore's Law of advancing technology is applied -- to new software that changes the paradigm again.

In some ways, the aim of the 15-year-old technology and today's is the same thing applied to a different purpose," Pope said.

That purpose acknowledges that pilots and air traffic controllers are in stressful vocations, and that they can better fly or tell a pilot where and how to fly if that stress is controlled. And it maintains that control comes from within, after it's detected through monitoring and altered through training.

"The more relaxed I am, the better I perform," said Stephens, demonstrating, first, stress-determining technology on a computer screen in the Operator Characterization and Performance Investigations (OCAPI) Laboratory at Langley. On that screen, a multi-tasking research software application, the NASA LaRC MATB-II, offered a joystick-controlled tracking task, fuel tank levels to monitor, status indicators to consider, audio input from a control tower –- in all, four dynamic tasks, each of which could be more or less automated to induce levels of stress, fatigue, boredom and other hazards of flying.

In another demonstration, on a video screen in front of him, a player's swing at a ball was modulated by the stress felt by that player. With modulation of in-game audio added, feedback is twofold.

Essentially, the player learns how to control stress through removing impediments to enjoying playing the game.

Its appeal to the gaming industry is both introducing the stress-reduction training aspect to controls and decreasing the predictability factor that causes people to tire of playing games.

"Our hope is that embedding beneficial, helpful biofeedback in everyday activities will be a valuable contribution to society," said Pope. "People, while they're doing their leisure activities, will be improving their health at the same time."