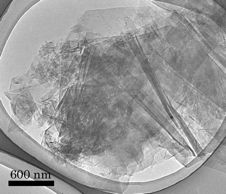 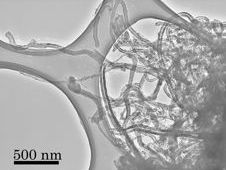 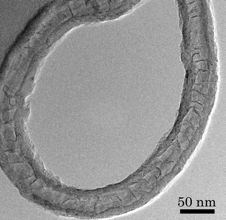 › Larger image
Nanotubes can grow on graphite (top) in an unruly mass (middle) according to "space's recipe." The overlapping segments on a single nanotube (bottom) are a telltale sign of the cup-stacked structure. (Image on bottom reproduced from Astrophysical Journal Letters.) Image credit: Yuki Kimura, Tohoku University Space apparently has its own recipe for making carbon nanotubes, one of the most intriguing contributions of nanotechnology here on Earth, and metals are conspicuously missing from the list of ingredients.

The finding is the surprising by-product of lab experiments designed by Joseph Nuth at NASA’s Goddard Space Flight Center, Greenbelt, Md. and his colleagues to address the astronomical question of how carbon gets recycled in the regions of space that spawn stars and planets. The work also could help researchers understand puzzling observations about some supernovas.

In a recent paper in Astrophysical Journal Letters, Nuth’s team describes the modest chemical reaction. Unlike current methods for producing carbon nanotubes—tiny yet strong structures with a range of applications in electronics and, ultimately, perhaps even medicine—the new approach does not need the aid of a metal catalyst. "Instead, nanotubes were produced when graphite dust particles were exposed to a mixture of carbon monoxide and hydrogen gases," explains Nuth.

"I am amazed at the implications of this paper, not only for astrophysics but also for materials science," says Dick Zare, the chair of the chemistry department at Stanford University, Stanford, Calif. "Could Nature know a new chemistry for making carbon nanotubes that we have yet to discover?"

One indication of that possibility came in 2008, when the long, thin carbon structures known as graphite whiskers—essentially, bigger cousins of carbon nanotubes—were identified in three meteorites. That finding offered the tantalizing prospect that a haze of graphite whiskers in space could explain why some supernovas appear dimmer, and therefore farther away, than they should be, according to current models. Yet, "very little is known about graphite whisker formation, and so it is difficult to adequately interpret their discovery," says Marc Fries of NASA’s Jet Propulsion Laboratory, Pasadena, Calif.

Fries and Andrew Steele at the Carnegie Institution for Science, Washington, reported the meteorite findings.

Now, the experiments by Nuth’s team suggest a possible route for forming such structures. This "is exactly the sort of fundamental approach needed for a meaningful understanding of what graphite whiskers are and what their presence means in the larger context of solar system formation and astronomical observations," Fries explains.

Nuth’s approach is a variation of a well-established way to produce gasoline or other liquid fuels from coal. It’s known as Fischer-Tropsch synthesis, and researchers suspect that it could have produced at least some of the simple carbon-based compounds in the early solar system. Nuth proposes that the nanotubes yielded by such reactions could be the key to the recycling of the carbon that gets released when carbon-rich grains are destroyed by supernova explosions.

The structure of the carbon nanotubes produced in these experiments was determined by Yuki Kimura, a materials scientist at Tohoku University, Japan, who examined the samples under a powerful transmission electron microscope. He saw particles on which the original smooth graphite gradually morphed into an unstructured region and finally to an area rich in tangled hair-like masses. A closer look with an even more powerful microscope showed that these tendrils were in fact cup-stacked carbon nanotubes, which resemble a stack of Styrofoam cups with the bottoms cut out.

These observations surprised Kimura because carbon nanotubes are typically grown with platinum or another metal as a catalyst, yet Nuth’s reaction had used no metals. Kimura checked for contamination but "did not find the presence of metallic particles accompanying the nanotube in the sample," he says.

If further testing indicates that the new method is suitable for materials-science applications, it could supplement, or even replace, the familiar way of making nanotubes, explains Kimura. That possibility "is most exciting and invites yet more study," says Zare.

The findings also might open a new realm of investigation in astronomy, because "we can take the whiskers produced by Joe and interrogate their properties," says Steele.

In particular, researchers can evaluate whether graphite whiskers absorb light, he notes. A positive result would lend credence to the proposition that the presence of these molecules in space affects the observations of some supernovas. The ability to test this hypothesis could start a reaction of its own. Elizabeth Zubritsky
Goddard Space Flight Center
Find this article at:http://www.nasa.gov/topics/technology/features/metal-free-nanotubules.html