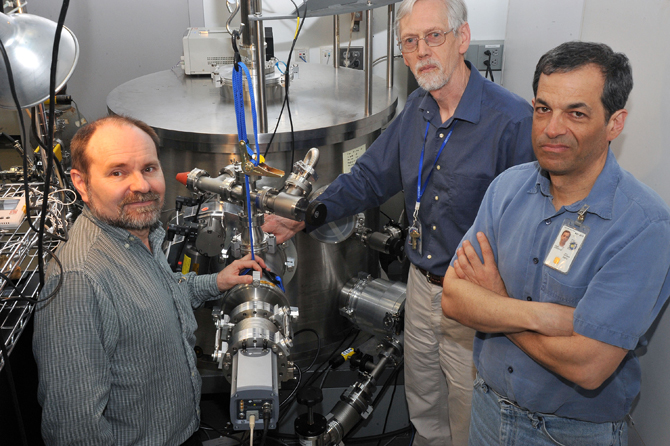 A technology that mimics the structure of a lobster's eyes is now being applied to a new instrument that could help revolutionize X-ray astronomy and keep astronauts safe on the International Space Station.

Scientists at NASA's Goddard Space Flight Center in Greenbelt, Md., are developing the "Lobster Transient X-ray Detector," which they hope to deploy on the space station in three to four years. From its perch on the orbiting outpost, the cross-cutting instrument now being developed by Jordan Camp, Scott Barthelmy, and Gerry Skinner would detect with unprecedented accuracy transient X-rays — those fleeting, hard-to-capture high-energy photons produced during black-hole and neutron-star mergers, supernovae, and gamma-ray bursts created much farther away in the early universe.

But the lobster-eye technology also could carry out another much-needed job.

It could check for ammonia leaks on the International Space Station — a problem that engineers at NASA's Johnson Space Center in Houston, Texas, have identified as needing a solution. Anhydrous ammonia, a toxic compound of nitrogen and hydrogen, is used as a coolant that helps regulate the station's onboard temperatures. Currently, leaks are at acceptable levels, but a sudden increase could pose serious risks to astronauts, Camp said. 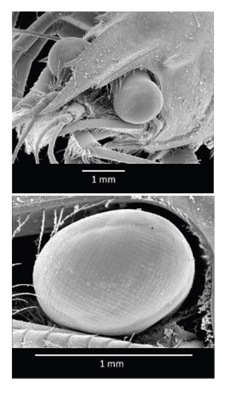 › View larger
The Lobster Transient X-ray Detector borrows from nature. These images show views of a crustacean’s orb, which are made up of long, narrow cells that each captures a tiny amount of light, but from many different angles. The new detector works the same way. New Application for Established Technology

Lobster technology isn't new. First conceived as an X-ray all-sky monitor by University of Arizona scientist Roger Angel in the 1970s, it mimics the structure of the crustacean's eyes, which are made up of long, narrow cells that each captures a tiny amount of light, but from many different angles. Only then is the light focused into a single image.

The lobster X-ray instrument's optics would work the same way. Its eyes are a microchannel plate, a thin, curved slab of material dotted with tiny tubes across the surface. X-ray light enters these tubes from multiple angles and is focused through grazing-incident reflection, giving the technology a wide field of view necessary for finding and then imaging transient events that cannot be predicted in advance. The lobster detector is unique in that it is highly sensitive and provides a wide field of view and high-angular resolution, Camp said.

Since Angel first conceived the concept, astronomers at the University of Leicester in Leicester, England, have matured the technology and have built an instrument to fly on BepiColombo, a mission to Mercury developed jointly by the European Space Agency (ESA) and the Japan Aerospace Exploration Agency. ESA plans to launch the spacecraft in 2014.

What's new is "what we want to do with it," Camp said. "The innovation is using the lobster technology for a cross-cutting application. We want to use the technology in a new way to promote both astrophysics and human spaceflight."

To advance the dual-use concept, the team is using Goddard Internal Research and Development and NASA Office of the Chief Technologist's Center Innovation Fund support to assemble and test a prototype equipped with a commercially available microchannel plate, a charged-coupled device detector, and associated electronics.

With its increased sensitivity and wide field of view, Camp said the instrument would be able to detect transient X-ray emissions from a large portion of the sky, giving scientists an unprecedented view of black-hole mergers, supernovae, and even gamma-ray bursts in the very distant universe. Transient X-rays are now difficult to detect because these sources brighten without warning and then vanish just as quickly.

He also believes the instrument could work in conjunction with and even extend the sensitivity of the Laser Interferometer Gravitational-Wave Observatory (LIGO), a National Science Foundation-funded experiment that has searched for gravitational waves since 2002. Gravitational waves, first postulated by Albert Einstein, are faint ripples in space-time that theoretically happen during massively powerful events, such as black-hole or neutron-star binary mergers.

Gravitational-wave detectors don't localize well. Used in conjunction with the focusing Lobster detector, however, scientists would be able to zero in on the location of the source, Camp said.

Just as exciting, Camp said, is how he could use the technology to detect ammonia leaks. Anhydrous ammonia runs through tubing connected to huge radiator panels located outside the space station. As the ammonia circulates through the tubing, it releases heat as infrared radiation. In short, it helps to regulate onboard temperatures. Possibly because of micrometeorite impacts or thermal-mechanical stresses, these lines currently leak.

In this case, the instrument, once attached to the space station's robotic arm, would sweep over the coolant lines and radiator panels in search of nitrogen, and more specifically the X-rays generated by the element. If nitrogen X-rays are detected, their presence could indicate leaks since ammonia is a compound of nitrogen and hydrogen.

Skinner has taken the lead in assembling and testing a leak-checking detector prototype and has recently succeeded in producing an X-ray image of a small nitrogen leak in a laboratory vacuum system. Barthelmy, meanwhile, is studying the system issues involved in deploying a dual-use lobster system on the space station.

"Many people are excited about the possibilities of this quintessentially cross-cutting instrument," Camp said. "With help from our IRAD program, we plan to advance the technology-readiness levels of our proposed instrument. We'll see where it goes. We believe it has great potential."