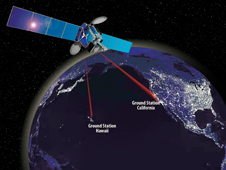 › View larger image
Conceptual image of LCRD. Credit: NASA It currently takes 90 minutes to transmit high-resolution images from Mars, but NASA would like to dramatically reduce that time to just minutes. A new optical communications system that NASA plans to demonstrate in 2016 will lead the way and even allow the streaming of high-definition video from distances beyond the Moon.

This dramatically enhanced transmission speed will be demonstrated by the Laser Communications Relay Demonstration (LCRD), one of three projects selected by NASA's Office of the Chief Technologist (OCT) for a trial run. To be developed by a team led by engineers at the NASA Goddard Space Flight Center in Greenbelt, Md., LCRD is expected to fly as a hosted payload on a commercial communications satellite developed by Space Systems/Loral, of Palo Alto, Calif.

"We want to take NASA's communications capabilities to the next level," said LCRD Principal Investigator Dave Israel, who is leading a multi-organizational team that includes NASA's Jet Propulsion Laboratory, Pasadena, Calif. and Lincoln Laboratory at the Massachusetts Institute of Technology, Cambridge, Mass. Although NASA has developed higher data-rate radio frequency systems, data-compression, and other techniques to boost the amount of data that its current systems can handle, the Agency's capabilities will not keep pace with the projected data needs of advanced instruments and future human exploration, Israel added.

"Just as the home Internet user hit the wall with dial-up, NASA is approaching the limit of what its existing communications network can handle," he said.

The solution is to augment NASA's legacy radio-based network, which includes a fleet of tracking and data relay satellites and a network of ground stations, with optical systems, which could increase data rates by anywhere from 10 to 100 times. "This transition will take several years to complete, but the eventual payback will be very large increases in the amount of data we can transmit, both downlink and uplink, especially to distant destinations in the solar system and beyond," said James Reuther, director of OCT's Crosscutting Technology Demonstrations Division.

The LCRD is the next step in that direction, Israel said, likening the emerging capability to land-based fiber-optic systems, such as Verizon's FiOS network. "In a sense, we're moving FiOS to space."

To demonstrate the new capability, the Goddard team will encode digital data and transmit the information via laser light from specially equipped ground stations to an experimental payload hosted on the commercial communications satellite.

The payload will include telescopes, lasers, mirrors, detectors, a pointing and tracking system, control electronics, and two different types of modems. One modem is ideal for communicating with deep space missions or tiny, low-power smallsats operating in low-Earth orbit. The other can handle much higher data rates, particularly from Earth-orbiting spacecraft, including the International Space Station. "With the higher-speed modem type, future systems could support data rates of tens of gigabits per second," Israel said.

Once the payload receives the data, it would then relay it back to ground stations now scheduled to operate in Hawaii and Southern California.

The multiple ground stations are important to demonstrating a fully operational system, Israel said. Cloud cover and turbulent atmospheric conditions impede laser communications, requiring a clear line of sight between the transmitter and receiver. If bad weather prevents a signal from being sent or received at one location, the network could hand over the responsibility to one of the other ground stations or store it for later retransmission.

The demonstration is expected to run two to three years.

The project isn't NASA's first foray into laser communications. MIT Lincoln Laboratory engineers are now developing a laser communications payload for Goddard for NASA’s Lunar Atmosphere and Dust Environment Explorer (LADEE), which the Agency plans to launch in 2013 to characterize the Moon’s wisp-thin atmosphere and dust environment. The main goal of the LADEE experiment is proving fundamental concepts of laser-based communications and transferring up to 622 megabits per second, which is about five times the current state-of-the-art from lunar distances.

However, the LADEE payload, called the Lunar Laser Communications Demonstration (LLCD), is equipped with only one modem, the lower-speed model best suited for deep space communications. In addition, LADEE is a short-duration mission. LLCD is expected to operate for only 16 days of the LADEE mission, not enough time to demonstrate a fully operational laser-communications network, Israel said.

"What we're trying to do is get ahead of the curve," Israel said. "We want to get to the point where communications is no longer a constraint on scientists who want to gather more data, but are worried about getting their data back from space." Lori Keesey
NASA's Goddard Space Flight Center, Greenbelt, Md.
› Back To Top