A kitchen gadget used to sift flour and other ingredients is the inspiration behind the name of an emerging technology that could resolve some of the more intriguing components of the sun's chromosphere -- the irregular layer above the photosphere that contributes to the formation of solar flares and coronal mass ejections.

Adrian Daw and Douglas Rabin, scientists at NASA's Goddard Space Flight Center in Greenbelt, Md., are collaborating with researchers at the U.S. Air Force Academy (USAFA) in Colorado and other Air Force-affiliated organizations to build a small solar observatory equipped with the so-called "photon sieve," an eight-inch (20-centimeter) diffractive optic. A version of this technology was successfully demonstrated in a ground test, paving the way for its flight on a tiny Cubesat satellite in 2014 -- the Air Force-sponsored FalconSat-7 mission. That mission will demonstrate the practicality of deploying this emerging technology in space and possibly paving the way for a larger heliophysics mission in the future. 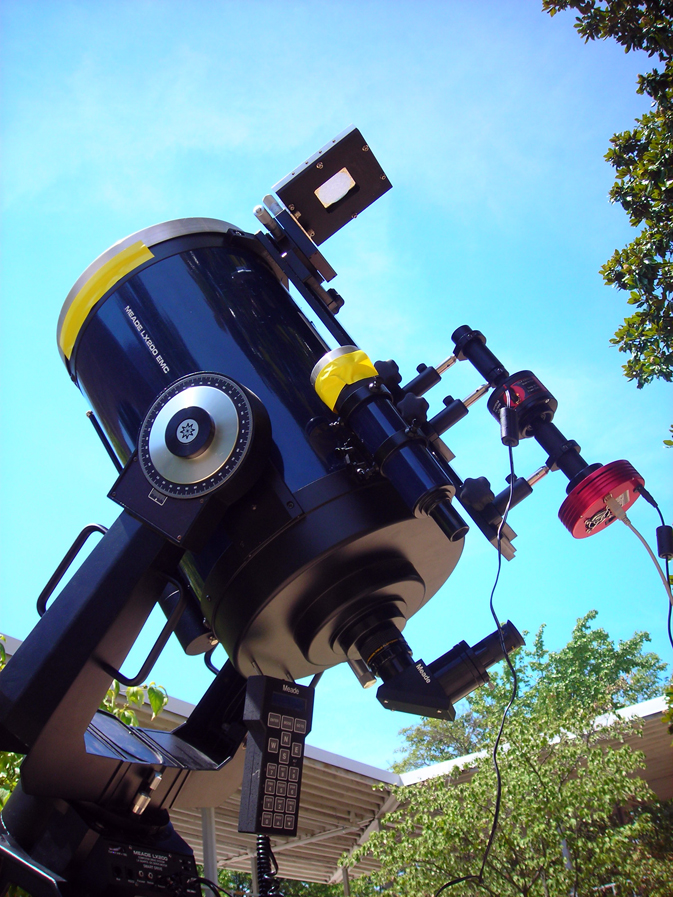 "We've studied the sun's corona for years and it's complicated. But the chromosphere, which can be seen as a thin pink layer during a total solar eclipse, is even harder to understand," Daw said. "Things are happening there at spatial scales we can't currently resolve with existing space- or ground-based telescopes."

Although a large observatory comparable in size to the Hubble Space Telescope could resolve currently unseen magnetic flux tubes and filamentary plasma within coronal loops, the cost to build a conventional large-aperture solar telescope is prohibitive, Daw said. "The photon sieve could help us overcome this obstacle and help us provide a game-changing technology for high-resolution imaging in space," he said.

A Variant of Fresnel Zone Plates

The technology that could help bring these details to light is a variant of the Fresnel zone plate, which focuses light through diffraction rather than refraction or reflection. These devices consist of a set of alternating transparent and opaque concentric circular rings. Light hitting the plate diffracts around the opaque zones, which are precisely spaced so that the diffracted light interferes at the desired focus to create an image taken by a camera.

The sieve operates largely the same. However, the rings are dotted with millions of holes, like a kitchen sieve or sifter, whose sizes and positions are configured so that the light diffracts to a desired focus. As a result of its design, the sieve can be patterned on a flat surface and can be easily scaled up in size -- particularly if constructed of a polyimide film similar to the ubiquitous Kapton, which spacecraft and instrument developers commonly use because it can withstand extreme temperatures and vibration.

But perhaps the most significant advantage is that the lightweight, easily rolled and deployed film need not be pulled to a perfect optical flatness like more traditional mirrors. In fact, surface requirements for traditional mirrors are 100 times more stringent -- making the photon sieve ideal as a quick-turnaround space-based optic. This appeals to the Air Force. In the event of a catastrophic loss of its current intelligence, surveillance, and reconnaissance satellites, the military would need a simple replacement system easily deployed from a small, inexpensive satellite, like a Cubesat.

Since its invention more than a decade ago by Lutz Kipp, a professor at Kiel University in Germany, researchers at the USAFA's Laser and Optics Research Center have experimented with different materials for making the sieve. USAFA's Geoff Andersen, Michael Dearborn, and Geoff McHarg initially experimented with chrome-coated quartz or glass, later focusing their efforts on lightweight polyimide films or membranes. In laboratory testing, these sieves showed great promise for narrow and broadband imaging in visible wavelength bands, particularly in the H-alpha wavelength band ideal for detecting structure within the solar chromosphere.

What they lacked, however, was expertise in solar physics and some of the analytical tools needed to evaluate the sieve's deployment mechanisms. "They were looking for the best way to demonstrate their technology," Daw said. "It's easier to test imaging technologies with a really bright source, like the sun. They contacted us to see if we wanted to collaborate. Of course we did. The collaboration is proving to be of great mutual benefit to both organizations."

Since joining the effort, which also involves the Air Force Research Laboratory and the Air Force Institute of Technology, both located at the Wright-Patterson Air Force Base in Ohio, Goddard has analyzed requirements for deploying the sieve and keeping the membrane relatively flat once the Cubesat reaches its 280-mile (450-kilometer) orbit.

Daw's team also designed and constructed a ground-based imaging system to test a glass version of the sieve. "Using this system, we took the first-ever solar images using such a device," Daw said. "In fact, these are the first images of any astronomical object using a photon sieve." The next step is carrying out ground-based tests of the membrane sieve, he added. 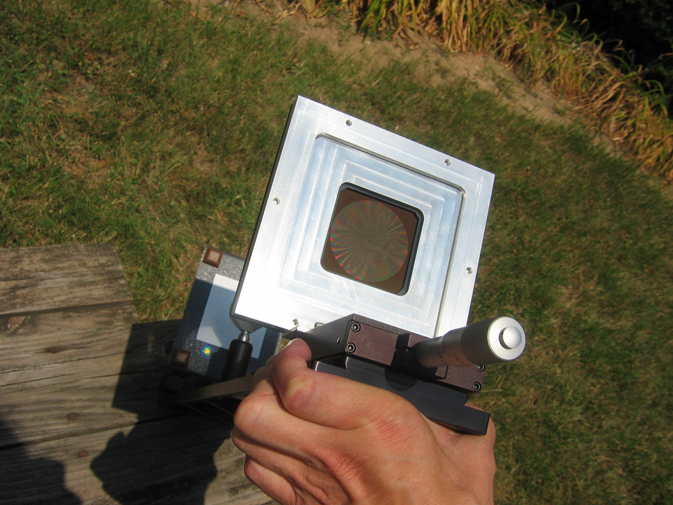 This version of the photon sieve was used last summer to capture the first images of the sun using this new technology. (Credit: Adrian Daw)
› Larger image

"These two accomplishments -- a ground-based demonstration of the photon-sieve technology and the analysis of the deployment system -- are major advances for deployable membrane optics," Daw said. As a result of these successes, he and his team are now investigating ways to extend the sieve's wavelength range to the extreme ultraviolet, which is most interesting to solar physicists. "This technology has lots of applications for heliophysics," Daw said.