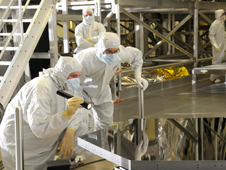 Ball technicians examine James Webb Space Telescope mirrors. They are looking for lint or dust that may have landed on the mirror surfaces during shipping to NASA's Marshall Space Flight Center in Huntsville, Ala. Credit: NASA/MSFC, E. Given
> Larger image Mirrors are a critical part of any space telescope, and the James Webb Space Telescope's mirrors are made of a special element that will enable it to withstand the rigors of space and see farther back in time/distance than any other telescope now in operation.

Space telescope mirrors must endure the extremely frigid temperatures in space, be highly reflective, lightweight and tough. Those are exactly the qualities that make up the 18 mirrors being developed for the Webb Telescope.

To collect as much light as possible to see galaxies from 13 billion light-years away, the Webb Telescope needs a large mirror but also needs to be lightweight enough to not weigh down the rocket carrying it into space. The answer was to make it out of beryllium.

By definition, a mirror is an object with a surface that is smooth enough to form an image, such as a "plane mirror," which has a flat surface. Curved mirrors produce magnified or reduced images or focus light or simply distort the reflected image. Most mirrors are designed for visible light. There are, however, mirrors that work at other wavelengths of electromagnetic radiation, "such as X-ray, infrared, microwave, or even radio wavelengths. 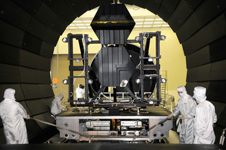 The Marshall Space Flight Center received two mirrors in the first shipment in December 2008. NASA and Ball Engineering technicians guide the mirrors into the center's X-ray and Cryogenic Facility's vacuum chamber for testing. Credit: NASA/MSFC, E. Given
> Larger image Mirrors on Earth have been made from many things. Europeans during the Renaissance coated glass with a tin-mercury amalgam. The silvered-glass mirror invented in 1835 involved the deposition of a thin layer of metallic silver onto glass through the chemical reduction of silver nitrate. Today, mirrors are often produced by the vacuum deposition of aluminum (or sometimes silver) directly onto the glass substrate.

Space Mirrors: What is Beryllium?

Mirrors for space telescopes require special materials. That's where beryllium comes in. Beryllium is a light metal (atomic symbol: Be) with many features that make it desirable to be used for the Webb Telescope's mirrors.

Beryllium is steel-gray in color, very strong for its weight and good at holding its shape across a range of temperatures, which is just what it would encounter in space. Beryllium is also a good conductor of electricity and heat and is not magnetic. It also has one of the highest melting points of the light metals.

What's also interesting is that beryllium is a relatively rare element in both the Earth and the universe, because stable forms of beryllium are not formed either in the atomic reactions inside stars or in the Big Bang. Instead, when carbon and oxygen atoms in the gas between the stars collide with each other or are struck by other particles, the nucleus of the atoms will occasionally break into up into the lighter elements lithium, beryllium and boron.

Here on Earth, most of the beryllium exists in minerals such as beryl and bertrandite. It is also a component of the precious gems aquamarine, red beryl and emerald. Currently, most industrial production of beryllium is accomplished by a chemical reaction between beryllium fluoride and magnesium metal.

Beryllium is used to develop parts for supersonic (faster-than-the-speed-of-sound) airplanes and the Space Shuttle, because it is both lightweight and strong. It is also used in gyroscopes, computer equipment, watch springs and instruments where light weight, rigidity and dimensional stability are needed.

Beryllium is actually highly toxic to plants, animals and humans. It's not necessary or useful for life. In fact, it has no known role in living organisms. So, during the manufacturing and handling, special care has to be taken when working with it, because it is unhealthy to breathe in or swallow beryllium dust.

How and Where the Beryllium Mirror is Made

The beryllium being used to make the Webb Telescope's mirrors was mined in Utah and then purified. The particular type of beryllium used in the Webb mirrors is called "O-30" and is a fine powder of high purity. The powder is then placed into a stainless steel canister and pressed into a flat shape. The steel canister is then removed and the resulting chunk of beryllium is cut in half to make two mirror blanks about 1.3 meters (4 feet) across. Each mirror blank will be used to make one mirror segment; the full Webb mirror will be made from 18 hexagonal (six-sided) segments.

Once the mirror blanks pass inspection, they are molded into their final shape, polished and temperature tested to ensure they can withstand the frigid temperatures of space.

Beryllium is much more capable than glass to handle the frigid cold of space. The James Webb Space Telescope will face a temperature of -240 degrees Celsius (33 Kelvin). Beryllium contracts and deforms less than glass -- and remains more uniform -- in such temperatures. For the same reason, the optics of the Spitzer Space Telescope were entirely built of beryllium metal. It is thanks to beryllium that the James Webb Space Telescope will be able to see further back into the universe and back in time than any other space telescope operating today.

The James Webb Space Telescope is expected to launch in 2013. NASA's Goddard Space Flight Center in Greenbelt, Md., is managing the overall development effort for the Webb Telescope. The telescope, being built by Northrop Grumman, is a joint project of NASA and many U.S. partners, the European Space Agency and the Canadian Space Agency. Rob Gutro
NASA's Goddard Space Flight Center
› Back To Top