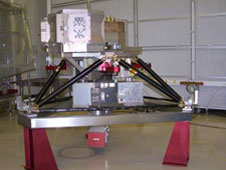 The Webb telescope's Mid-Infrared Instrument (shown here) passed its test readiness review and has begun thermal vacuum testing. Credit: UK/Astronomy Technology Centre
>Click for larger image.
Observing the universe in the infrared light portion of the spectrum is important because many objects scientists want to observe in space are far too cold to radiate at shorter wavelengths that can be seen as visible light, but they radiate strongly in infrared light.

The Mid-InfraRed Instrument (MIRI) is one of four sophisticated instruments onboard the Webb telescope which will study the early universe and properties of materials forming around new born stars in unprecedented detail. It will also be able to image directly massive planets orbiting other stars.

Speaking at the 3rd Appleton Space Conference on Dec. 6, European Consortium Lead for MIRI, Dr. Gillian Wright from the U.K. Astronomy Technology Centre (ATC) in Edinburgh said, "It is extremely exciting, after working on the project since 1998, to begin to test a complete instrument. This will provide scientists with real data which they can use to understand the best ways of making discoveries with the instrument." 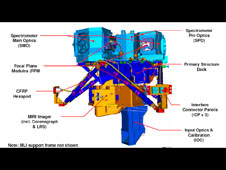 Overview of the MIRI. The instrument includes both imaging and spectroscopic capability. Credit: UK Astronomy Technology Centre
>Click for larger image MIRI's development is an effort between NASA and the European Space Agency (ESA). NASA's Jet Propulsion Laboratory in Pasadena (JPL), Calif, leads the NASA effort and is responsible for the development of MIRI's detectors, its cryocooler, and flight software.

MIRI has already undergone alignment checks with a piece of test equipment simulating the Integrated Science Instrument Module, the part of the spacecraft where the MIRI will be attached. This test equipment was supplied by NASA's Goddard Space Flight Center, Greenbelt, Md. who are leading the development of the Webb observatory.

MIRI is the first of the Webb telescope instruments to reach this phase of cryogenic performance testing and marks a significant milestone for this international team.

"The testing is being undertaken at the STFC’s Rutherford Appleton Laboratory in Oxfordshire where all MIRI’s subsystems from collaborators in Europe and NASA’s JPL are integrated and tested in full," says Matt Greenhouse, Integrated Science Instrument Module scientist on the Webb Telescope project at NASA Goddard. This involves thermal and electromagnetic calibration and scientific and environmental testing. 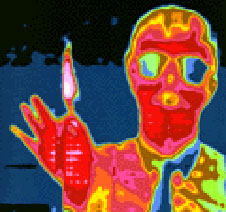 A human's normal body temperature is 98.6F, radiating strongly in the MIRI spectral range, near a 10 micron wavelength. This image shows a man holding up a lighted match! Credit: IPAC CalTech
Dr. Tanya Lim, who leads the international MIRI testing team explains, "Given the international nature of this project it is essential to bring together both instrument and test equipment components from around the world to ensure that they work together." She adds, "We will also be using the instrument flight software which will need to work with the spacecraft and ground software systems in order to command the instrument, simulate telemetry to the ground and generate images from the test environment."

The MIRI testing team are working around the clock until the completion of the first tests just before Christmas. Paul Eccleston, MIRI Assembly, Integration and Test Lead adds, "MIRI is the largest individual flight instrument that has been built at RAL, and has presented unusual challenges particularly with regard to cooling and thermal control. The instrument will operate at temperatures much lower than the rest of the spacecraft. As a result, the first two weeks of testing involved cooling the instrument down to its operational temperature of -267ºC, only 6.2K above absolute zero."

During spring 2008, further testing will take place using the MIRI Telescope Simulator – a special facility being built in Spain. This simulator is unique to MIRI and will be able to simulate the stars that will be seen. 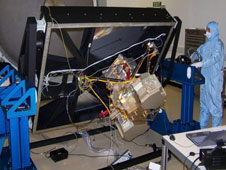 The MIRI is positioned on a turnover fixture during testing. Credit: UK Astronomy Technology Centre
>Click for larger image The James Webb Space Telescope is a 21st century space observatory that will peer back more than 13 billion years in time to understand the formation of galaxies, stars and planets and the evolution of our own solar system. It is expected to launch in 2013. The telescope is a joint project of NASA, the European Space Agency and the Canadian Space Agency.