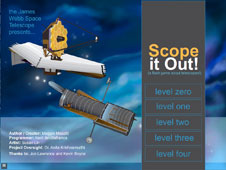 > View larger image
Front page of the Webb Telescope on-line game, "Scope it Out!" Credit: NASA, M.Masetti NASA has developed a flash on-line game about telescopes, featuring NASA's next-generation spacecraft, the James Webb Space Telescope! The game, called "Scope it Out!" includes an introduction to telescopes and four matching games where you can compare simple telescopes to both Webb and the Hubble Space Telescope.

"This is a great way to teach children and adults on how simple and complex space telescopes work," said Anita Krishnamurthi, the Education and Public Outreach Lead for Webb at NASA’s Goddard Space Flight Center, Greenbelt, Md. The level of the game is for middle school students and above.

The James Webb Space Telescope is a large, infrared space telescope, scheduled for launch in 2013. JWST will find the first galaxies that formed in the early Universe, connecting the Big Bang to our own Milky Way Galaxy. It will peer through dusty clouds to see stars forming planetary systems, connecting the Milky Way to our own Solar System.

The Webb Telescope may be unusual in appearance but it has a lot in common with simple tube-shaped telescopes. It may have a sunshield the size of a tennis court and an 18-segment mirror that looks like a honeycomb, but Webb is still a reflecting telescope. As such, it has many of the same components as the telescopes used by astronomy enthusiasts here on Earth. The Webb telescope's orbit, however, will be far from Earth, about one million miles away. 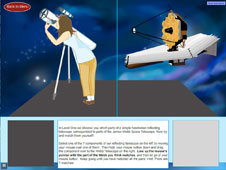 > View larger image
Credit: NASA, M.Masetti There are five levels of gaming in "Scope it Out!" game from Level Zero to Level Four. Most levels present an image of a young woman looking through a telescope, side-by-side with a space telescope. Level Zero gives a basic lesson in telescope optics through animated graphics. Level One is where the matching game starts, by asking the player to find the seven components in the simple telescope that match with those in the Webb telescope. The game culminates in Level Four where players have to find the components of the Hubble Telescope that match up with the James Webb Space Telescope.

This game requires FLASH 8 or higher, and there are two versions. One version is for large monitors (1024x768) the other is for smaller (800x600) monitors. Once a monitor size is chosen, the game will pop up in a separate window. For convenience, there's also a small toggle button in the lower left corner of the game to allow a player to change the quality of the graphics.

The web page also provides a downloadable wallpaper of a cool image from the game, of the Webb space telescope in space.

The game was created at NASA Goddard by Maggie Masetti with Dr. Anita Krishnamurthi providing oversight on the project. Programmer Kent deVillafranca and artist Susan Lin, both of Science Systems and Applications, Greenbelt, Md. did the programming and graphics for this project.