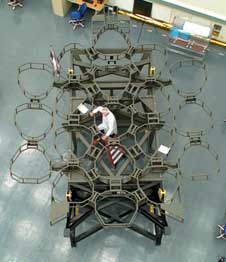 > View larger image
Pictured with the OTE mockup is Josh Levi, the OTE Integration and Test lead. Credit: Northrop Grumman Recently, a mock-up of the OTE’s Primary Mirror Backplane Assembly (PMBA), which supports the telescope’s mirror segments, was used to simulate how the element frame will be handled when the actual components of the telescope are being assembled.

The OTE's support frame will actually house all 18 of the Primary Mirror Segment Assemblies that comprise the Primary Mirror on the telescope. The OTE gathers the light coming from space and directs it into the science instruments.

The Webb telescope needs a large mirror (made up of the 18 mirrors) to collect as much light as possible to see galaxies from the beginning of the Universe. The Webb telescope scientists and engineers have determined that a primary mirror 6.5 meters (21.3 feet) across is needed to collect enough light to measure these galaxies. 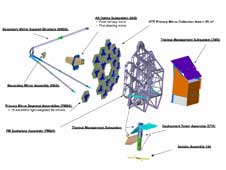 > View larger image
Diagram of James Webb Space Telescope Instruments including OTE. Credit: NASA As with the assembly of any satellite or spacecraft, it's important for engineers to practice first, so, a mock-up of the PMBA was created at Northrop Grumman, Redondo Beach, Calif. for that purpose. Engineers there are simulating the handling, installation and alignment of the frame as they will when doing so with the flight hardware. They also check for clearance problems in advance of moving the real telescope between Northrop Grumman’s facility in Redondo Beach Calif. and NASA Goddard Space Flight Center in Greenbelt, Md."When it comes to handling one-of-a-kind space telescopes, practice makes perfect," said Lee Feinberg, NASA Optical Telescope Element Manager at Goddard.

Charles Atkinson, Deputy Telescope Manager, Northrop Grumman Aerospace Systems said, "Even though it is many months from when we will perform the Integration and Test of the actual flight hardware, the mock-up has already been incredibly beneficial. The OTE's large size and many handling and test configurations make early demonstrations very important when laying out the handling equipment and volume necessary to perform the various integration and test operations."

The other major components of the OTE include the Secondary Mirror Assembly and its tripod support, the secondary mirror support structure, the Aft Optics Subsystem which contains the tertiary mirror and the fine steering mirror, the Deployable Tower Assembly, along with electronics and thermal control hardware. In addition to holding the OTE together, the PMBA will be where the science instruments, in the Integrated Science Instrument Module, are installed in the Observatory. 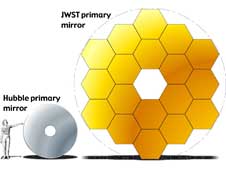 > View larger image
James Webb Space Telescope vs. Hubble Mirror Sizes. Credit: NASA The Primary Mirror Backplane Assembly that holds the OTE is too wide to fit inside a rocket. So, the answer to making it fit is to enable the OTE to fold up. That's just what the engineering team has enabled the OTE to do. Once folded it will fit into a rocket, and once launched will then unfold in space under the command of messages transmitted from Earth.

All of the flight primary mirror segments that will populate the OTE have completed the grinding phase. "With all 18 flight mirror segments in the final polishing stage of production its time to start preparations for their installation, beginning with the challenging task of handling the telescope’s outsized mounting structure," said Mark Clampin, Webb Telescope Observatory Project Scientist at Goddard.

The 18 primary mirror segments in the OTE are made up of three slightly different shapes, consisting of six mirrors of each shape. Another challenge to engineers was to make the mirrors light enough to launch, so they solved that problem by using a metal called Beryllium.

Once the actual OTE structure is built and finalized and the mirrors have been completed, the mirrors will be integrated into the OTE. "Mirror installation begins on the structure in August 2011 and the telescope is built with the mirrors in May 2012," Feinberg said. NASA Goddard is managing the overall development effort for the Webb Telescope. The telescope, being built by Northrop Grumman, is a joint project of NASA and many U.S. partners, the European Space Agency and the Canadian Space Agency. The Webb telescope is expected to launch in 2014.