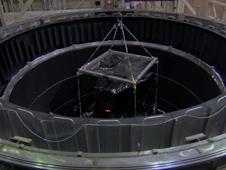 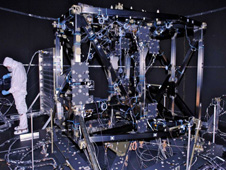 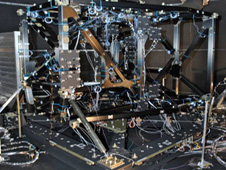 The ISIM Structure in the vacuum in the NASA Goddard Space Flight Center Space Environment Simulator. Credit: NASA/Chris Gunn
› Larger image Imagine building a car chassis without a blueprint or even a list of recommended construction materials.

In a sense, that's precisely what a team of engineers at the NASA Goddard Space Flight Center in Greenbelt, Md., did when they designed a one-of-a-kind structure that is one of 9 key new technology systems of the Integrated Science Instrument Module (ISIM). Just as a chassis supports the engine and other components in a car, the ISIM will hold four highly sensitive instruments, electronics, and other shared instrument systems flying on the James Webb Space Telescope, NASA's next flagship observatory.

From scratch — without past experience to help guide them — the engineers designed the ISIM made of a never-before-manufactured composite material and proved through testing that it could withstand the super-cold temperatures it would encounter when the observatory reached its orbit 1.5-million kilometers (930,000 miles) from Earth. In fact, the ISIM structure survived temperatures that plunged as low as 27 Kelvin (-411 degrees Fahrenheit), colder than the surface of Pluto.

"It is the first large, bonded composite spacecraft structure to be exposed to such a severe environment," said Jim Pontius, ISIM lead mechanical engineer.

The 26-day test was specifically carried out to test whether the car-sized structure contracted and distorted as predicted when it cooled from room temperature to the frigid — very important since the science instruments must maintain a specific location on the structure to receive light gathered by the telescope's 6.5-meter (21.3-feet) primary mirror. If the structure shrunk or distorted in an unpredictable way due to the cold, the instruments no longer would be in position to gather data about everything from the first luminous glows following the big bang to the formation of star systems capable of supporting life.

"The tolerances are much looser on the Hubble Space Telescope," said Ray Ohl, a Goddard optical engineer who leads ISIM's optical integration and test. "The optical requirements for Webb are even more difficult to meet than those on Hubble."

Despite repeated cycles of testing, the truss-like assembly designed by Goddard engineers did not crack. The structure shrunk as predicted by only 170 microns — the width of a needle —when it reached 27 Kelvin (-411 degrees Fahrenheit), far exceeding the design requirement of about 500 microns. "We certainly wouldn’t have been able to realign the instruments on orbit if the structure moved too much," said ISIM Structure Project Manager Eric Johnson. "That's why we needed to make sure we had designed the right structure."

Achieving the milestone was just one of many firsts for the Goddard team. Almost on every level, "we pushed the technology envelope, from the type of material we would use to build ISIM to how we would test it once it was assembled," Pontius added. "The technology challenges are what attracted the people to the program."

One of the first challenges the team tackled after NASA had named Goddard as the lead center to design and develop ISIM was identifying a structural material that would assure the instruments' precise cryogenic alignment and stability, yet survive the extreme gravitational forces experienced during launch.

An exhaustive search in the technical literature for a possible candidate material yielded nothing, leaving the team with only one alternative — developing its own as-yet-to-be manufactured material, which team members jokingly referred to as "unobtainium." Through mathematical modeling, the team discovered that by combining two composite materials, it could create a carbon fiber/cyanate-ester resin system that would be ideal for fabricating the structure's square tubes that measure 75-mm (3-inch) in diameter.

How then would engineers attach these tubes? Again through mathematical modeling, the team found it could bond the pieces together using a combination of nickel-alloy fittings, clips, and specially shaped composite plates joined with a novel adhesive process, smoothly distributing launch loads while holding the instruments in precise locations — a difficult engineering challenge because different materials react differently to changes in temperature.

"We engineered from the small pieces to the big pieces testing along the way to see if the failure theories were correct. We were looking to see where the design could go wrong," Pontius explained. "By incorporating the lessons learned into the final flight structure, we met the requirements and test validated our building-block approach."

The test inside Goddard's Space Environment Simulator — a three-story thermal-vacuum chamber that simulates the temperature and vacuum conditions found in space — presented its own set of technological hurdles. "We weren't sure we could get the simulator cold enough," said Paul Cleveland, a technical consultant at Goddard involved in the project. For most spacecraft, the simulator's ability to cool down to 100 Kelvin (-279.7 degrees Fahrenheit) is cold enough. Not so for the Webb telescope, which will endure a constant temperature of 39 Kelvin (-389.5 degrees Fahrenheit) when it reaches its deep-space orbit.

The group engineered a giant tuna fish can-like shroud, cooled by helium gas, and inserted it inside the 27-foot diameter chamber. "When you get down to these temperatures, the physics change," Cleveland said. Anything, including wires or small gaps in the chamber, can create an intractable heat source. "It's a totally different arena," he added. "One watt can raise the temperature by 20 degrees Kelvin. We had to meticulously close the gaps."

With the gaps closed and the ISIM safely lowered into the helium shroud, technicians began sucking air from the chamber to create a vacuum. They activated the simulator's nitrogen panels to cool the chamber to 100 Kelvin (-279.7 degrees Fahrenheit) and began injecting helium gas inside the shroud to chill the ISIM to the correct temperature.

To measure ISIM's reaction as it cooled to the sub-freezing temperatures, the team used a technique called photogrammetry, the science of making precise measurements by means of photography. However, using the technique wasn't so cut-and-dried when carried out in a frosty, airless environment, Ohl said. To protect two commercial-grade cameras from extreme frostbite, team members placed the equipment inside specially designed protective canisters and attached the camera assemblies to the ends of a motorized boom.

As the boom made nearly 360-degree sweeps inside the helium shroud, the cameras snapped photos through a gold-coated glass window of reflective, hockey puck-shaped targets bolted onto ISIM's composite tubes. From the photos, the team could precisely determine whether the targets moved, and if so, by how much.

"It passed with flying colors," Pontius said, referring to the negligible shrinkage. "This test was a huge success for us."

With the critical milestone test behind them, team members say their work likely will serve NASA in the future. Many future science missions will also operate in deep space, and therefore would have to be tested under extreme cryogenic conditions. In the meantime, though, the facility will be used to test other Webb telescope systems, including the backplane, the structure to which the Webb telescope’s 18 primary mirror segments are bolted when the observatory is assembled. "We need to characterize its bending at cryogenic temperatures," Ohl said.