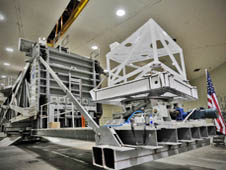 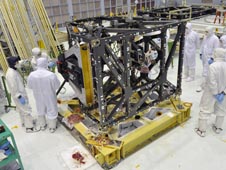 Webb will undergo significant shaking when it is launched on the large Ariane V rocket. To be sure the telescope's "chassis" is ready for this "bumpy road," the ISIM is subjected to some extreme testing.  During the testing process, the ISIM is spun and shaken while many measurements are taken. Afterwards, engineers compare the measurements with their models of the ISIM. If there are discrepancies, then the engineers track down why, and make corrections.

Webb will be the first next-generation large space observatory and will serve thousands of astronomers worldwide. Designed to detect light from as far away as approximately 14 billion light years, Webb will study every phase in the history of our Universe, ranging from the first luminous glows after the Big Bang, to the formation of planetary systems capable of supporting life on planets like Earth, to the evolution of our own Solar System. The Webb telescope is a joint mission of NASA, the European Space Agency and Canadian Space Agency.

For more information about the ISIM, visit:
http://www.nasa.gov/centers/goddard/news/releases/2010/10-079.html