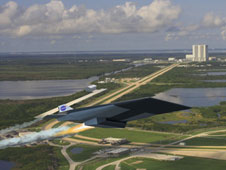 This artist's concept shows a potential design for a rail-launched aircraft and spacecraft that could revolutionize the launch business. Early designs envision a 2-mile-long track at Kennedy Space Center shooting a Mach 10-capable carrier aircraft to the upper reaches of the atmosphere. then a second stage booster would fire to lift a satellite or spacecraft into orbit. Credit: NASA/Artist concept
›  View Larger Image 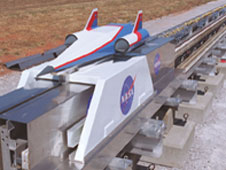 Different technologies to push a spacecraft down a long rail have been tested in several settings, including this Magnetic Levitation (MagLev) System evaluated at NASA's Marshall Space Flight Center. Engineers have a number of options to choose from as their designs progress. Photo credit: NASA
›  View Larger Image

As NASA studies possibilities for the next launcher to the stars, a team of engineers from Kennedy Space Center and several other field centers are looking for a system that turns a host of existing cutting-edge technologies into the next giant leap spaceward.

An early proposal has emerged that calls for a wedge-shaped aircraft with scramjets to be launched horizontally on an electrified track or gas-powered sled. The aircraft would fly up to Mach 10, using the scramjets and wings to lift it to the upper reaches of the atmosphere where a small payload canister or capsule similar to a rocket's second stage would fire off the back of the aircraft and into orbit. The aircraft would come back and land on a runway by the launch site.

Engineers also contend the system, with its advanced technologies, will benefit the nation's high-tech industry by perfecting technologies that would make more efficient commuter rail systems, better batteries for cars and trucks, and numerous other spinoffs.

It might read as the latest in a series of science fiction articles, but NASA's Stan Starr, branch chief of the Applied Physics Laboratory at Kennedy, points out that nothing in the design calls for brand-new technology to be developed. However, the system counts on a number of existing technologies to be pushed forward.

"All of these are technology components that have already been developed or studied," Starr said. "We're just proposing to mature these technologies to a useful level, well past the level they've already been taken."

For example, electric tracks catapult rollercoaster riders daily at theme parks. But those tracks call for speeds of a relatively modest 60 mph -- enough to thrill riders, but not nearly fast enough to launch something into space. The launcher would need to reach at least 10 times that speed over the course of two miles in Starr's proposal.

The good news is that NASA and universities already have done significant research in the field, including small-scale tracks at NASA's Marshall Space Flight Center in Huntsville, Ala., and at Kennedy. The Navy also has designed a similar catapult system for its aircraft carriers.

As far as the aircraft that would launch on the rail, there already are real-world tests for designers to draw on. The X-43A, or Hyper-X program, and X-51 have shown that scramjets will work and can achieve remarkable speeds.

Because the system calls for a large role in aeronautic advancement along with rocketry, Starr said, "essentially you bring together parts of NASA that aren't usually brought together. I still see Kennedy's core role as a launch and landing facility."

The Advanced Space Launch System is not meant to replace the space shuttle or other program in the near future, but could be adapted to carry astronauts after unmanned missions rack up successes, Starr said.

The studies and development program could also be used as a basis for a commercial launch program if a company decides to take advantage of the basic research NASA performs along the way. Starr said NASA's fundamental research has long spurred aerospace industry advancement, a trend that the advanced space launch system could continue.

For now, the team proposed a 10-year plan that would start with launching a drone like those the Air Force uses. More advanced models would follow until they are ready to build one that can launch a small satellite into orbit.

A rail launcher study using gas propulsion already is under way, but the team is applying for funding under several areas, including NASA's push for technology innovation, but the engineers know it may not come to pass. The effort is worth it, however, since there is a chance at revolutionizing launches.

"It's not very often you get to work on a major technology revolution," Starr said.