Grow Text SizeShrink Text Size
They're Trying to Make a Dream Come True
The story began on June 3, 1982, when a camera in an Australian P-3 patrol plane captured images of a Soviet ship recovering a space craft from the Indian Ocean.

It continued Wednesday, when Sierra Nevada Corp. honored the employees -- many now retired -- at NASA's Langley Research Center who used those photos to carve a cherry wood model of the Soviet craft, a BOR-4, then used that model as the jumping-off point to the HL-20 (for horizontal lander) personnel space vehicle.

A proper ending, says Sierra Nevada chairman, Mark Sirangelo, would be for its version of the HL-20, the "Dream Chaser," to ferry crews from Earth to the International Space Station and back.

On April 18, NASA awarded Sierra Nevada -- a Louisville, Colo., firm -- $80 million to continue work on the Dream Chaser after it was judged among four winners of the second round of the Commercial Crew Development (CCDev) program.

"I had made a promise that if we ever got to the point where the program was beginning to go to the next level, that we would find a way to come back and thank all of those people who enabled this," Sirangelo told an assembly at Langley's Pearl Young Theater.

In the audience was Bobby Braun, now NASA's chief technologist. In the early 1980s, he was among several at Langley who tested access and egress of the cabin on the HL-20 mockup.

Lori Garver, deputy NASA administrator, represented the agency and put the role of the space taxi competition into perspective. 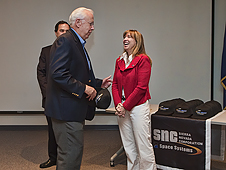 That vision began after the photos from the Australian plane came to Langley, via American intelligence.

"We spent a long time trying to figure out what it was," said Del Freeman, who was one of the few people at the center who had the compartmentalized security clearance to see the photos.

"We were 'reverse-engineering it.' Finally, we got enough information to build a model and we put it into (a wind) tunnel. When we tested it, we really figured out that we had something."

More tests showed that the lifting body design could carry the plane through a range of speeds with little or no effect on control, said George Ware, who tested the model from Mach 0.3 to Mach 4.6.

From the reverse-engineering came more ideas. One was to enable the vehicle to land like an airplane.

The HL-20 evolved, then stalled when NASA moved on to other things. Then the idea of a space taxi stalled altogether.

It's back, with commercial interests. 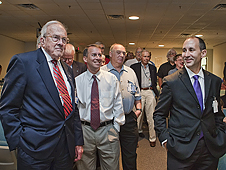 Sierra Nevada was casting about for ideas and considered four concepts before turning to the HL-20.

"The HL-20 had the best combination: a lot of history, a lot of testing done on it," Sirangelo said. "Also, the people who worked on it are still alive and around and engaged, so we had a chance to get that history."

One of the first steps was seeing the mockup, which was done by students and researchers from North Carolina State University and North Carolina A&T, under the eyes of NASA personnel.

"A little over seven years ago, we visited Langley and had the opportunity to see the HL-20, which was, at that time, in the back of a warehouse covered with a lot of dust and other stuff," Sirangelo said.

"A lot of people told us we needed to get a clear sheet and start all over again. We decided we didn't want to do that. We wanted to build on something."

More background told them they were on the right path. Sierra Nevada entered into a Space Act Agreement with NASA Langley. Agreements with six other NASA centers followed.

"We realized that the vehicle was one of the most tested and reviewed vehicles that had never flown," Sirangelo said. "Among its missions, it was initially meant to be the lifeboat to the space station."

It could be again.

Sierra Nevada has built its own test article and, next year, intends to drop test it in the atmosphere, either from a helicopter or an airplane. 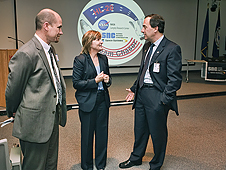 A suborbital test is scheduled for 2013, with an orbital test in 2014, in part depending on Sierra Nevada's progress through NASA's system of winnowing out contenders to find the commercial space taxi that it can support.

There were 25 companies when the competition began.

At first glance, the testing schedule appears ambitious, but, Sirangelo points out, "when you think about it, these guys did 10 years of work on it. We've been working on it for seven years. So it will be the 20th year of the vehicle when it goes into orbit."

The spacecraft of two decades ago and today's "Dream Chaser" look remarkably alike.

"You'd be surprised at how little it's changed," Sirangelo said. "The more we got into it, the more we realized how smart you all were."

The Sierra Nevada party was given a Langley tour before the ceremony and seemed to be taken with it all.

"We decided today, perhaps in an emotional manner, that we're going to take one of the seats on the (mockup) and turn it into an HL-20 seat," Sirangelo said, just before inviting all of the NASA Langley participants to the eventual launch of the "Dream Chaser."

It could offer an opportunity for something few anticipated after the HL-20 program ended: actually seeing the craft fly.

"We knew it was a viable concept then, early on," Freeman said. "It's got a lot of merit."

Enough so that Sierra Nevada is trying to end the story by having the "Dream Chaser" perform as a taxi between Earth and the International Space Station.