Grow Text SizeShrink Text Size
NASA Pinning Down "Here" Better Than Ever
Before our Global Positioning System (GPS) navigation devices can tell us where we are, the satellites that make up the GPS need to know exactly where they are. For that, they rely on a network of sites that serve as "you are here" signs planted throughout the world. The catch is, the sites don't sit still because they're on a planet that isn't at rest, yet modern measurements require more and more accuracy in pinpointing where "here" is.


The science of geodesy traces its history to the Greek scholar Eratosthenes, who used basic geometry to estimate the distance around the Earth at roughly 25,000 miles, which is quite close to the modern measurement of 24,902 miles. Credit: NASA/GSFC

To meet this need, NASA is helping to lead an international effort to upgrade the four systems that supply this crucial location information. NASA's initiative is run by Goddard Space Flight Center in Greenbelt, Md., where the next generation of two of these systems is being developed and built. And Goddard, in partnership with NASA's Jet Propulsion Laboratory in Pasadena, Calif., is bringing all four systems together in a state-of-the-art ground station.

"NASA and its sister agencies around the world are making major investments in new stations or upgrading existing stations to provide a network that will benefit the global community for years to come," says John LaBrecque, Earth Surface and Interior Program Officer at NASA Headquarters.

GPS won't be the only beneficiary of the improvements. All observations of Earth from space—whether it's to measure how far earthquakes shift the land, map the world's ice sheets, watch the global mean sea level creep up or monitor the devastating reach of droughts and floods—depend the International Terrestrial Reference Frame, which is determined by data from this network of designated sites. 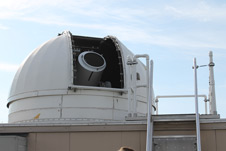 Earth is a shapeshifter. Land rises and sinks. The continents move. The balance of the atmosphere shifts over time, and so does the balance of the oceans. All of this tweaks Earth's shape, orientation in space and center of mass, the point deep inside the planet that everything rotates around. The changes show up in Earth's gravity field and literally slow down or speed up the planet's rotation.

"In practical terms, we can't determine a location today and expect it to be good enough tomorrow—and especially not next year," says Herbert Frey, the head of the Planetary Geodynamics Laboratory at Goddard and a member of the Space Geodesy Project team.

Measuring such properties of Earth is the realm of geodesy, a time-honored science that dates back to the Greek scholar Eratosthenes, who achieved a surprisingly accurate estimate of the distance around the Earth by using basic geometry.

Around 240 BC, Eratosthenes found that when the sun sat directly above the Nile River town of Syene, it shone an angle of 7.2 degrees (1/50 of a circle) in the northern city of Alexandria. Reasoning that the distance from Alexandria to Syene was 1/50 of the way around the globe, he came up with a circumference of roughly 25,000 miles for Earth, quite close to the modern measurement of 24,902 miles.

"Even with the sophisticated tools we have now, geodesy is still all about geometry," says Frank Lemoine, a Goddard geophysicist on the project.

As in ancient Greece, geodesy today is a team sport, relying on observations conducted in multiple places. Over the years, four types of space geodesy measurements, carried out by a squad of ground stations and satellites, developed independently. Together, they tell the story of what's happening on Earth and keep track of the Terrestrial Reference Frame.

› Larger image
This 12-meter radio antenna is a new addition to a faster and more sensitive VLBI (Very Long Baseline Interferometry) system being developed at the Goddard Geophysical and Astronomical Observatory. The goal for the new system is to be able to measure down to the millimeter, or about the thickness of a penny. Credit: NASA/GSFC/Elizabeth Zubritsky "While there is some overlap in what can be gleaned from each geodetic technique, they also provide different forms of information based on how they operate," says Jet Propulsion Laboratory's David Stowers, who manages the hardware and data flow for the GPS portion of the space geodesy initiative. "GPS was designed specifically as a positioning system and is fairly ubiquitous, thus providing data strength in numbers. It is unique in providing a physical point of reference for the Terrestrial Reference Frame, with the position of the GPS antenna as the primary type of data."

Another technique, Very Long Baseline Interferometry (VLBI), acts as a kind of GPS for Earth. To deduce Earth's orientation in space, and the small variations in the Earth's rate of rotation, ground stations spread across the globe observe dozens of quasars, which are distant enough to be stable reference points.

"VLBI is the one technique that connects measurements made on Earth to the celestial reference frame—that is, the rest of the universe," says Stephen Merkowitz, who is the project manager for NASA's space geodesy initiative.

The key is the painstakingly accurate timing of when the quasar signals arrive. "With this information, we can determine the geometry of the stations that made the observations," says Chopo Ma, head of the VLBI program at Goddard.

By knowing the geometry, researchers aim to measure the distances between the ground stations down to the millimeter, or about the thickness of a penny.

Keeping tabs on Earth's center of mass is the job of satellite laser ranging (SLR). It measures the distances to orbiting satellites by shooting short pulses of laser light at satellites and measuring the time it takes for the light to complete the round trip back to the ground station.

Another way to measure distances to satellites is with DORIS (Doppler Orbitography and Radiopositioning Integrated by Satellite), which was built and is operated by the French space agency, known as CNES.

DORIS takes advantage of the Doppler effect, which is at work when an ambulance's siren changes pitch as it's driving toward or away from you. The same effect retunes the frequency of a radio signal emitted by a DORIS beacon as the signal travels from the ground into space and is received by a satellite orbiting the Earth. By measuring the frequency change, researchers can work backward to figure out the distance from the beacon to the satellite that picked it up.

Like GPS, DORIS requires little hardware on the ground, so its beacons are spread all over the globe, even in areas as remote as the Mount Everest base camp. 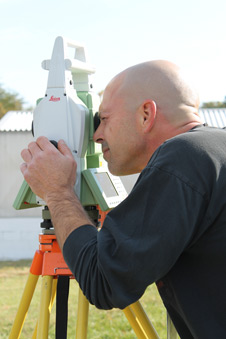 › Larger image
As part of the development of a state-of-the-art "vector tie" system to link together all four techniques used in space geodesy, Erik Donald surveys the grounds at the Goddard Geophysical and Astronomical Observatory. Credit: NASA/GSFC/Elizabeth Zubritsky All ground stations were not created equal. Some sites are home to one technique, others to two or three, and the sophistication of the techniques can vary from station to station. Right now, only Goddard and the station in Johannesburg, South Africa, are providing results from all four. NASA wants to change that.

"The plan for the upgraded system is to have at least three, and preferably all four, techniques at every station," says LaBrecque. "This is one of the keys to achieving the goals of a millimeter of accuracy and a tenth of a millimeter of stability for future measurements."

At the Goddard Geophysical and Astronomical Observatory (GGAO) in Greenbelt, Md., where the state-of-the-art prototype station is being developed, a new VLBI antenna was just installed. Capable of moving faster than its predecessors, the antenna will complete more observations during a run. It's the first piece of a completely revamped VLBI system that will be more sensitive yet less prone to interference from things like cell phones.

The Next Generation SLR is also being developed at GGAO, under the direction of Jan McGarry, with the goals of more automated operation and the ability to target satellites in higher orbits. Already operational for selected tasks, the system has been ranging to NASA's Lunar Reconnaissance Orbiter since June 2009.

Another key innovation at Goddard's new station is the "vector tie" system that will link together all four measurement techniques. "Right now, we have these four independent techniques, and they're just that: independent," Lemoine says. "Presently, at a particular ground station, the techniques are only tied together by expensive and infrequently performed ground surveys."

But with the vector tie system, which will use a laser to continuously monitor the reference points of each technique, researchers will know exactly where a station's GPS, VLBI, SLR and DORIS sit relative to each other at all times, allowing them to better correct one of the last sources of error in the terrestrial reference frame.

Between 25 and 40 upgraded stations would need to be deployed worldwide the complete the new network. The importance of this investment is detailed in the report "Precise Geodetic Infrastructure: National Requirements for a Shared Resource" by the National Research Council of the National Academies in Washington, D.C.

Agencies around the world, including Germany's Bundesamt für Kartographie und Geodäsie, France's Institut Géographique National, the Geographical Survey Institute of Japan, and Geoscience Australia, would build the stations. Together, these groups would choose the best locations, and the work would be done in cooperation with the Global Geodetic Observing System, a scientific organization that helps maintain the terrestrial reference frame.

"By bringing at least three of the four techniques together in each station, we will get a stronger system overall," says Frey. "NASA is leading the way in this, building a prototype station that will go beyond our current scientific requirements and serve the satellites of the future."